Q&A video and photos: Why has Italy largely forgotten what happened at San Domino?

Home-Q&A video and photos: Why has Italy largely forgotten what happened at San Domino?

Q&A video and photos: Why has Italy largely forgotten what happened at San Domino? 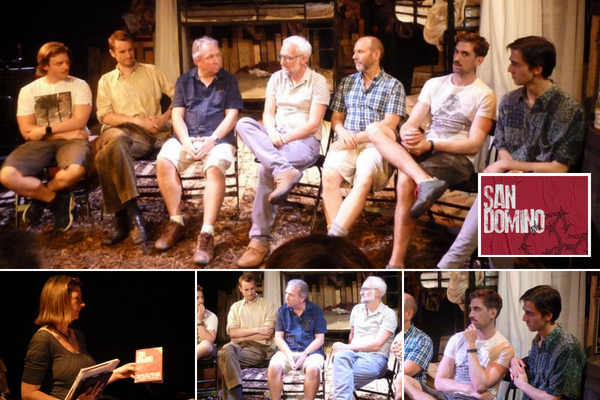 The post-show Q&A chaired by Terri Paddock for San Domino at Tristan Bates Theatre on 9 June 2018.

Before the performance at Tristan Bates Theatre, the 16-strong company of San Domino entertain theatregoers in the bar with some jaunty patriotic songs, with which they lead them into the auditorium. It’s somewhat akin to the chilling scene in Kander and Ebb’s Cabaret when the Hitler Youth sings “Tomorrow Belongs to Me”. 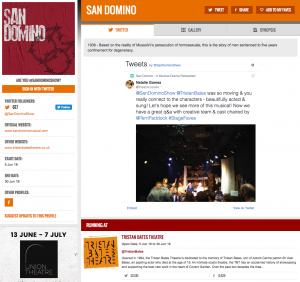 Get all social media for San Domino & its cast on www.stagefaves.com

Inside the auditorium, we learn more about how a fascist state treats those for whom, in their opinion, the future does not belong – including the “degenerates” who are unwilling to perform their duty of providing their nation with sons and daughters.

San Domino is an original British musical, written by long-time friends (and former bandmates) Tim Anfilogoff and Alan Whittaker, about the real-life Mediterranean island prison of the title, where, under Mussolini in the years leading up to the Second World War, hundreds of gay men were imprisoned. Anfilogoff first learned about San Domino from a 2013 feature on BBC Radio Four’s From Our Own Correspondent, when a reporter attended a ceremony on the island to unveil a small plaque on the island that commemorates the victims and promises that Italy does not forget.

In fact, like many of collaborationist activities of the Vichy Government in France, this stain on Italian history is largely forgotten – a point immediately underlined by an Italian couple in the audience yesterday who said they recently vacationed on the very island, hadn’t seen the plaque and had no idea that it was once a prison.

San Domino is staged during this year’s London Pride month. Other post-show discussions scheduled include ones with Sarah Day, author of Mussolini’s Island, and another with the UK’s leading LGBT and human rights activist Peter Tatchell.

Apologies that our wifi connection kept dropping. We’ve published these short excerpts from the discussion. We recorded a backup video that we hope to publish in full soo.