Q&A video and podcast: How did Miss Nightingale fly into its perfect venue at the Hippodrome?

Home-Past Events – Q&A video and podcast: How did Miss Nightingale fly into its perfect venue at the Hippodrome?

Q&A video and podcast: How did Miss Nightingale fly into its perfect venue at the Hippodrome? 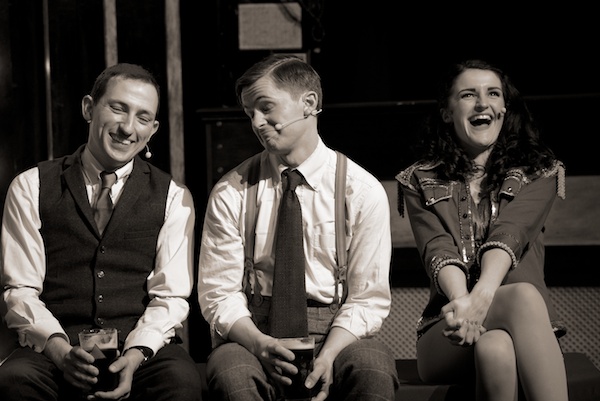 When I chaired my first post-show Q&A at Miss Nightingale a year ago, I thought its home then was ideal: The Vaults, in its labyrinth beneath Waterloo Station, so like an air raid shelter, seemed to perfectly fit the setting of London during the Blitz. But now that it’s moved to the London Hippodrome, it’s obvious, THIS is truly the ideal venue for this lovely original British musical, which tells the story of a cabaret act in a wartime nightclub.

At Thursday night’s post-show Q&A, it was great to hear more about the Hippodrome, then and now – including how the venue’s management saw Miss Nightingale at The Vaults and not only invited the actor-musician production to its stage but decided to co-produce and immerse it here.

In London in 1942, Maggie Brown, an aspiring singer and her best friend George Nowodny, a songwriter and Jewish refugee, perform a dazzling act at the newest nightclub in town, owned by wealthy socialite and RAF war-hero, Sir Frank Worthington-Blythe. Maggie’s beau Tom Connor paves the way for the sexy and charismatic ‘Miss Nightingale’ to be born, and the musical duo quickly find themselves with a West End hit. However, what the leading lady doesn’t know, is that George and Sir Frank are hiding a secret and as Miss Nightingale’s success grows, so does a forbidden love between the two men.

For the Q&A, I was joined once again by the show’s creator Matthew Bugg – who has written the music and lyrics for Miss Nightingale’s 16 shows as well as its book, directed it and also appears, playing no fewer than six instruments (or is it seven?) – and his real-life partner and show co-producer Tobias Oliver as well as 2018 cast members Lauren Chinery (Miss Nightingale), Matthew Floyd Jones (George), Oliver Mawdsley (Sir Frank) and Adam Langstaff (Tom).

Have a listen to the full unedited Q&A podcast – lots of insights into actor-musician motivations, casting and orchestrations – and scroll down for event photography care of Peter Jones and live-tweeting from the event.

Miss Nightingale continues at the London Hippodrome until 6 May 2018.