Q&A podcast and photos: How has Anthony Horowitz lent his support to Mindgame revival?

Home-Q&A podcast and photos: How has Anthony Horowitz lent his support to Mindgame revival?

Q&A podcast and photos: How has Anthony Horowitz lent his support to Mindgame revival? 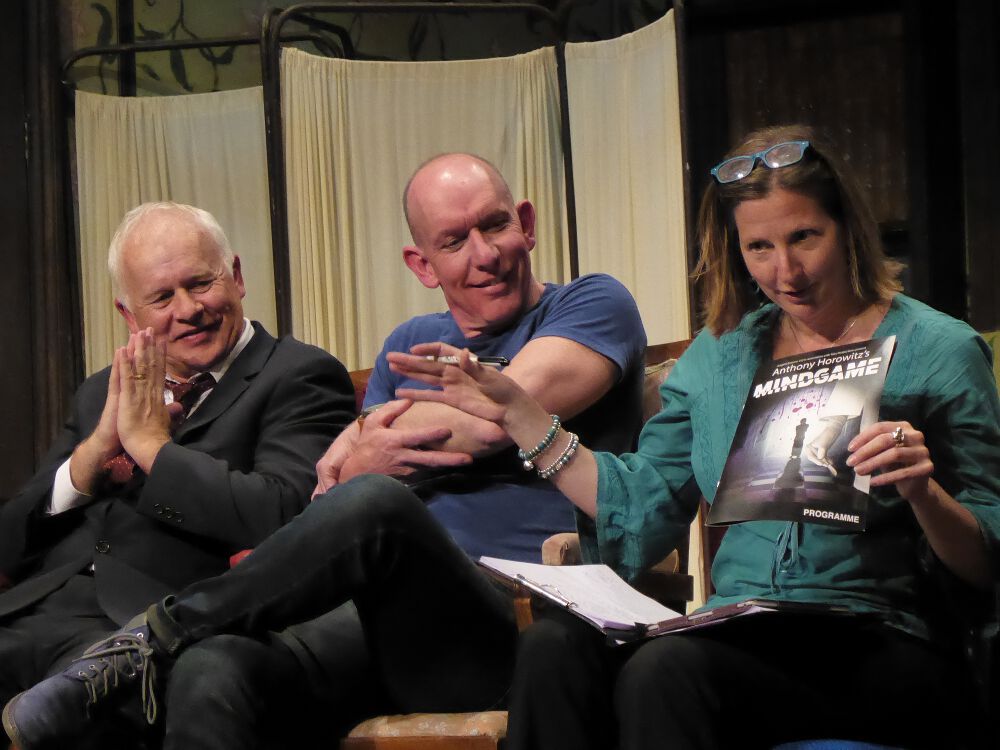 A keen audience of Anthony Horowitz fans and super sleuths last night at Mindgame made for a highly revealing post-show Q&A. How many set secrets did we correctly identify? And which character, plot and research twists?

Warning: if you want to be surprised when you see this mind-bending thriller, absolutely DON’T listen to the podcast beforehand. But rise to the challenge. Go, then come back and listen and see what you got right? I guarantee, however perceptive you are, there will be some surprises here.

Mindgame is the first of only three stage plays to date written by the prolific Anthony Horowitz, whose myriad, multimedia credits include Foyle’s War onscreen and over 40 novels – amongst them, the Alex Rider teen spy series, two new Sherlock Holmes’ mysteries and, commissioned by the Ian Fleming estate, new James Bond thrillers Trigger Mortis and, released on 31 May 2018, Forever and a Day.

Mindgame premiered in Colchester in 1999 before transferring to the West End’s Vaudeville Theatre in 2000. This is the first time it’s been seen in the West End since, although this Angela Browne Ltd revival, first staged in 2016 as part of the Theatre Royal Nottingham’s annual Classic Thrillers season, has toured extensively over the past two years.

Mark Styler, a writer of glossy ‘true crime’ paperbacks, has no idea what he’s walking into when he tries to get an interview with Easterman, a notorious serial killer. First, he has to get past Dr Farquhar, the quixotic head of Fairfields – the asylum where Easterman is kept. But soon he discovers that nothing is what it seems.

In addition to show secrets, we discussed: Horowitz’s support for the show (and surprise at the ‘new’ script); the company’s close links to next-door neighbour and the world’s most successful stage thriller, The Mousetrap; the principles of psychodrama (thanks to the psychiatrist in the audience!); and the incredible achievement of this hard-working and multi-talented group to seize this opportunity to make the production company’s West End debut… with just ten days’ notice.

Mindgame continues at the West End’s Ambassadors Theatre until 2 June 2018.