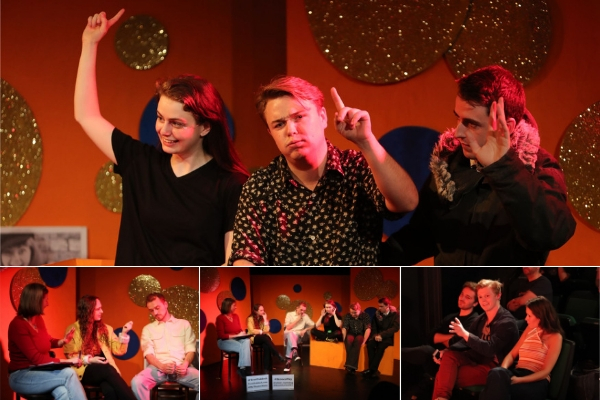 Are you a David Bowie fan? What first turned you on? Was it seeing his Top of the Pops debut as Ziggy Stardust? Was it your parents taking you to your first Bowie concert when you were still a baby? Was it memorising the album liner notes in your bedroom?

Bebe Barry inherited her love of David Bowie from her father Tony, and it was Tony’s memories of how seeing Bowie on Top of the Pops and his own teen efforts to see Bowie concert that inspired them to co-write Heroes, a brilliant 1970s-set coming-of-age story about fandom and friendship.

After success on tour and at the Edinburgh Festival, Bebe and her company Exploding Whale have now revived Heroes for another limited London season, now running at Drayton Arms Theatre.

The humdrum lives of Billie (played by Bebe) and her best friend Joe (Henry Lewis) are changed forever after witnessing Bowie performing ‘Starman’ for the first time on Top of the Pops. Determined to attend Bowie’s upcoming London gig, the friends leave home on what becomes a journey of self-discovery where the lines between hero worship and friendship become blurred. The story is set in the summer of 1972 to the soundtrack of Bowie’s album The Rise & Fall of Ziggy Stardust & The Spiders from Mars.

So many great Bowie fandom anecdotes and other memories of life-changing concerts, mixed tapes and more. An absolute must for Bowie fans and for anyone who live their lives to the soundtrack of their favourite bands.

Heroes runs until 11 May 2019 at London’s Drayton Arms Theatre.