Home-History has its eyes on us all: My joy and sorrow at Lin-Manuel Miranda’s Hamilton

I feel incredibly privileged to have been “in the room where it happens” to see the European premiere of HAMILTON last night at the West End’s Victoria Palace Theatre.

There is so much to love about Lin-Manuel Miranda‘s blockbuster hip-hop musical about one of my homeland’s founding fathers, Alexander Hamilton, not least a glorious British cast, under the assured stewardship of the show’s original Broadway director Thomas Kail. But for all its considerable entertainment value, there are some vitally important messages here, about politics, society and the fragility of our institutions – messages that, 246 years after the birth of the world’s greatest modern democracy, are perhaps never more urgent than now. How many of us are listening? History has its eyes on us all, as one of Miranda’s lyrics reminds us.

And so, with my own multiple identities – theatre lover, dual national, fangirl, politics geek, history buff, immigrant and others – I found myself watching HAMILTON with a mixture of joy and sorrow. I explain more in the video below, to which I’ll add a few things.

First, thank you Lin-Manuel Miranda for making this American ex-pat feel proud of her homeland for the first time in quite awhile. Here onstage is the America I love: diverse, vibrant, “young, scrappy and hungry” and capable of producing such magnificent art. 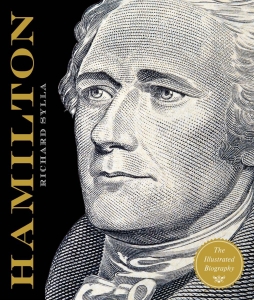 Win copies of Hamilton: The Illustrated Biography on www.stagefaves.com

Second, well done Cameron Mackintosh on your own race against time with your restoration of the Victoria Palace. It’s wonderful to have this gem back and looking so regal.

Third, be sure to buy the programme. There’s some great stuff here about the real-life Alexander Hamilton as well as Miranda’s six-year journey with the show from the debut of the title song at a White House Poetry Jam (would such a thing happen in THIS White House?) to Off-Broadway opening. If you want to know still more about Hamilton, there’s the Ron Chernow biography that inspired Miranda and also, just released in the UK, the sumptuous Hamilton: The Illustrated Biography by Richard Sylla, which is my holiday bedside read.

Also scroll down for my on-the-night tweet reactions to Hamilton and other videos. And get social for the show and all its London cast – including my personal long-time faves Giles Terera, Jason Pennycooke and Michael Jibson – on my site www.stagefaves.com.

I watched with joy and sorrow

As referenced in my vlog, the cast of HAMILTON had a message for Mike Pence, then vice-president elect, when he attended the Broadway production a few days after the 2016 US elections unleashed on the world a President Trump.

“We are the diverse America who are alarmed and anxious that your new administration will not protect us, our planet, our children, our parents or defend us and uphold our inalienable rights, sir. But we truly hope this show has inspired you to uphold our American values and work on behalf of all of us.”

Tonight, VP-Elect Mike Pence attended #HamiltonBway. After the show, @BrandonVDixon delivered the following statement on behalf of the show. pic.twitter.com/Jsg9Q1pMZs

What are your Top 10 Hamilton songs?

I’m still making up my mind on how to rank Hamilton’s songs myself. Now that I have seen the show, I’ve started playing the Broadway cast recording on repeat – I certainly hope there’s a West End recording soon, I NEED a version with Giles Terera‘s Aaron Burr – and need several more listens to decide. In the meantime, here’s quite a good run-down. Do you agree with these picks?