Home-Curtains Q&A photos and tweeting: Are we all entitled to a ‘decent death’? 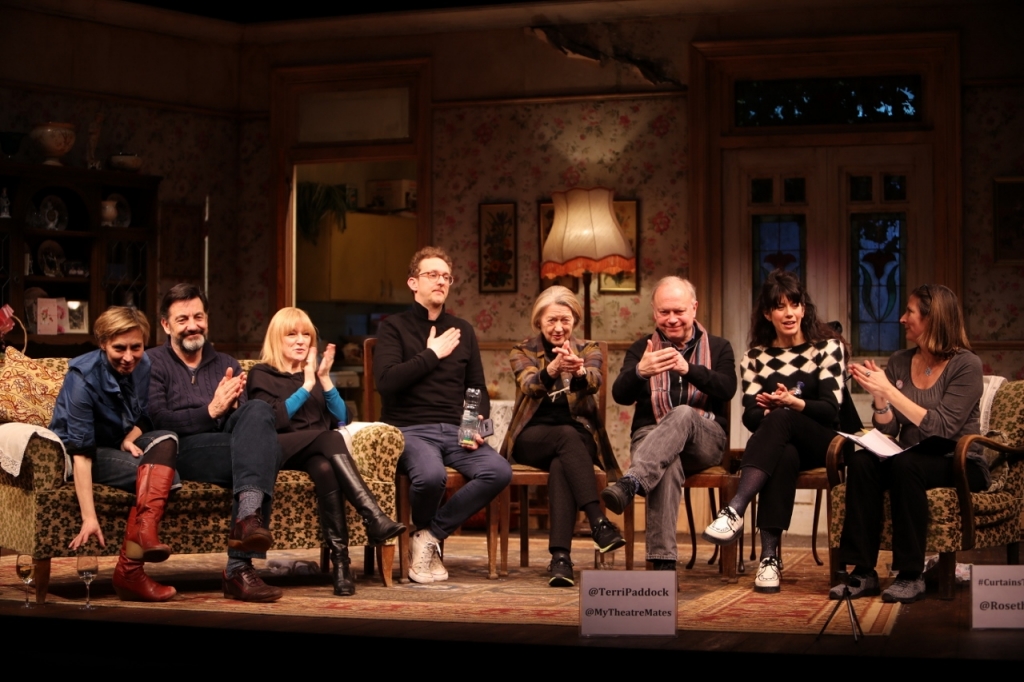 My post-show talk for Curtains at the Rose Theatre. © Anthony Kelly

If an elderly relative in enormous physical pain begged you to help them to die, would you? Would you ever ask the same of someone else? What is a ‘decent death’? Should we all have the right to one? Or, put another way, should euthanasia be legalised in the UK?

Those are some of the central questions raised in Stephen Bill’s black comedy Curtains. The play was premiered in 1987 – at Hampstead Theatre before transferring to the West End and, in 1996, to New York – and 31 years later, with an increasingly ageing population, those questions, with all their moral and legal ramifications, seem even more relevant.

Ida has one birthday wish. Will it come true? Her family is throwing her a tea party for her eighty-sixth birthday, but their efforts to be cheerful and make the event a success verge on the desperate. Afflicted with dementia and racked with pain, Ida feels she has lived too long. A comedy about end-of-life decisions sounds like a contradiction in terms, but Bill’s award-winning play, about the unfunny issue of the right every individual should have to depart this world with dignity, tackles this very serious topic with humour and heart.

The play is now receiving its first major London revival at the Rose Theatre Kingston, where Lindsay Posner directs a stellar cast, with Sandra Voe as Ida, Saskia Reeves, Wendy Nottingham and Caroline Katz as her three daughters, Jonathan Coy and Tim Dutton as two of the daughters’ husbands, Marjorie Yates as Ida’s neighbor, and, last but not least, Stephen Bill’s son Leo Bill as Ida’s grandson and caregiver Michael.

I was joined by all of the cast (except for Yates) for last night’s post-show Q&A at the Rose, where many of those opening questions were asked anew and both cast and audience members shared incredibly personal experiences and insights about caring for their own relatives.

Again and again, we came back to lines in the script, which articulately, but with a light touch, presents a range of views and, as Caroline Katz noted, “forces us to listen to one another”.

Leo Bill also talked about the thrill of appearing in one of his father’s plays for the first time – and having Stephen living with him in London during rehearsals! While he was only six when Curtains premiered at Hampstead, the play, one of Stephen’s biggest hits, was a presence throughout his childhood as further productions were mounted around the world (a Scandinavian poster was especially good apparently) including the New York premiere, which a teenaged Leo flew over with his family to see.

Saskia Reeves, Wendy Nottingham and Caroline Katz also talked about the appeal of playing each other’s sisters and all the cast relished the opportunity to work (in many cases again) with Lindsay Posner, one of the country’s leading directors. Saskia and Sandra also revealed some of the emotional, physical and technical challenges of the crucial second scene, where alone after the strained party, daughter Katherine must decide whether to grant her mother her birthday wish. Sandra saw the original 1987 production and found the scene shocking then – as it continues to shock today, as the gasps around me in the audience last night showed.

During the event, we also touched on how much society’s views on certain aspects of the play have changed in the 31 years since Curtains was first seen: not least on ageing and disability activism. But what was clearly most strongly felt was how little had changed in terms of our rights to decide how and when we want to die. The time to properly reopen that conversation is overdue.

Curtains continues at the Rose Theatre, Kingston, until 17 March 2018.