Home-Curse of the character actor? Antony Sher doubted he could play Falstaff 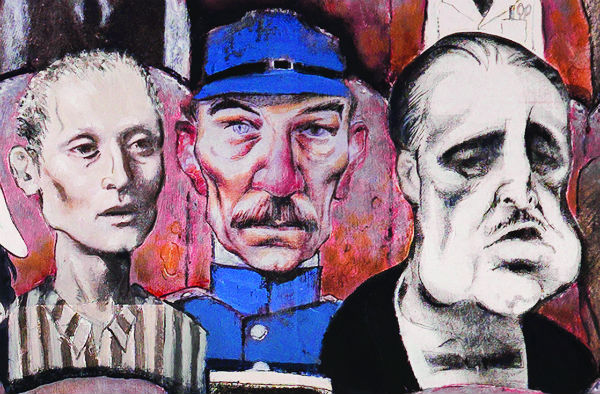 As captured by Antony Sher, the artist: Other great character acting from Meryl Streep in “Sophie’s Choice”, Ian McKellen in “Othello”, Marlon Brando in “Godfather”

Tonight, Antony Sher opens in the West End in the RSC’s transfer of Death of a Salesman. But, as acclaimed as the production is, as important as it is in this centenary year of Arthur Miller’s birth, and as epic a part as life’s underdog Willy Loman (who Sher plays) is, the truth is this is a little bit of a sandwich season.

In Stratford-upon-Avon, where it ran on the RSC’s main home base stage, the Royal Shakespeare Theatre, Death of a Salesman followed on the heels of one of the biggest, juiciest challenges of Sher’s career: playing Shakespeare’s ultimate comic (-tragic?) role, the larger-than-life Sir John Falstaff in Henry IV, Parts 1 and 2.

Both Shakespeare and Miller stagings are directed by Greg Doran, artistic director of the RSC and Sher’s life partner since they met in 1987 on an RSC production of The Merchant of Venice, in which Sher, already a ‘name’, starred as Shylock and a younger Doran, before he gave up acting, played Solanio. 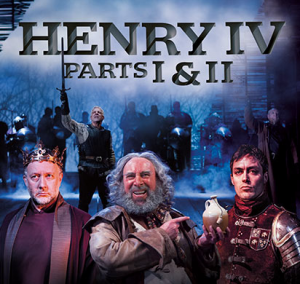 The Henries transfer to London’s Barbican Centre in December 2015

Despite the director’s intimate access to his actor of choice, however, persuading Sher to accept the role of Falstaff was no easy task – as is made abundantly clear in Sher’s latest book, Year of the Fat Knight: The Falstaff Diaries. Sher, the consummate character actor, was riddled with doubts; doubts that assailed him throughout his time considering, researching, rehearsing and performing the role, which has already won him the Critics’ Circle Award for Best Shakespearean Performance.

Year of the Fat Knight is a fascinating read for many reasons. Apart from his insights into the pleasures and pains of acting for a living, Sher writes beautifully about life, art, relationships and, of course, Shakespeare. And, also a painter (is there no end to this man’s talents?!), his sketches and other illustrations add – literal – colour to the book.

Below is an edited extract from Year of the Fat Knight‘s first chapter, in which Sher struggles with the very idea of himself at Falstaff and delays accepting the role, despite the urgings of no less than Ian McKellen, Derek Jacobi and, of course, Greg Doran – who, by the way, seems like an ideal husband and human being. In fact, they both do. So…

Antony, Greg, just in case you’re reading this, if you’re ever free for dinner, please come round to mine in SE1, anytime. Open invitation.

For the rest of you, read on and enjoy! 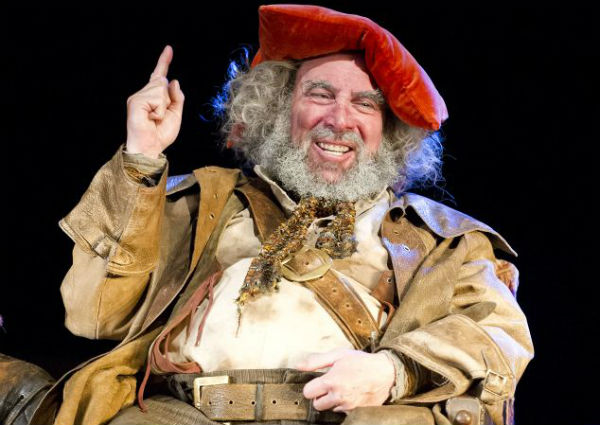 From Year of the Fat Knight

A month or so ago, Greg (Doran; Royal Shakespeare Company Artistic Director, and my partner) was talking to Ian about whether he’d like to come back to the company, and what parts he might play. Greg mentioned that he was directing Henry IV Parts I and II next year, and what about Falstaff? Ian said it wasn’t of interest to him, and then added, ‘But why are you looking for Falstaff when you’re living with him?’

Ian was making reference to a performance of mine that he’d seen at the National Theatre: Jacob in Travelling Light. Nicky Wright’s play is about the early days of film-making, set in an East European shtetl, circa 1900, and Jacob is the local timber merchant (and embryonic movie mogul), described in the stage directions as ‘a big and ebullient man, a Tolstoyan peasant’. As a character, he is what is called larger-than-life. And yes, looking back now, I suppose Jacob could have been Falstaff’s Jewish cousin.

Anyway, Greg told me what Ian had said, and we smiled at it, and didn’t take it seriously at all. Falstaff has never been a part I’ve remotely thought of as being mine.

Casting it has preoccupied Greg for a couple of years now, and I’ve been his sounding board from time to time. All sorts of names have been mooted – including Patrick Stewart, Jim Broadbent, Brian Cox – but Greg eventually decided his first choice was Derek Jacobi. The offer is presently with him….

I didn’t know how to react to Greg. I had no problem about not being the first choice for the part – if you live with a director, you understand the nature of these things – but the idea was still baffling. Me as Falstaff? Short, Jewish, gay, South African me as Shakespeare’s gigantically big, rudely hetero, quintessentially English, Fat Knight? It made no sense.

But this is an ongoing problem for the character actor. He never feels ideally right for any part.

I said, ‘Well… let’s talk about it again… if Derek says no.’ And we moved on to other things.

Greg rang from Oxford. He’s just spoken to Derek Jacobi, who has said no. Not because of other commitments, but because he’s reread it and can’t see himself in the role.

‘So,’ said Greg; ‘I am now officially proposing that you do it.’

After a pause, I said, ‘I’ll think about it, okay?’ Then put the phone down, feeling I’d just had bad news.

[Greg said:] ‘You can change yourself… you’re a “shape-shifter”.’

‘But it’s not just Falstaff’s shape. There’s something about his spirit. That’s the truly big bit of him.’

‘Then why haven’t I been thought of before? You’ve talked about all sorts of actors. We’ve talked about them together. I’ve never been in the frame. Never – in either of our heads.’

‘And that’s fine,’ said Greg confidently. ‘Happens all the time in casting. The best idea, the person you end up with, wasn’t even on your original list.’

‘Well… there’s something else. And it’s not easy to talk about.’

I proceeded slowly: ‘We’re in a funny position. That crazy Observer thing about power couples. I mean, when we met, I was already established, you were starting out… and yet now, in terms of power, you’re much more powerful than me. You know I have no problem with that. You know I rejoice in you having The Job. But with something like this, where I’m a completely left-field idea for the part, and maybe completely wrong… we could be accused of nepotism.’

‘You’re not thinking about this properly. Nepotism. I mean it seriously. I’d hate that charge to be made. I’d hate it for you especially. And actually it could be bad for you – this early on in The Job – if you get this wrong.’

‘I’m not getting this wrong.’

Greg was calm. I was not.

He said, ‘And if it’s of any comfort to you, the Board would have to ratify your casting. It comes under a clause called Conflict of Interests. At the next Board meeting, I’d have to step out of the room while they discussed exactly what you’re scared of – the question of nepotism.’ He paused. ‘So how do we proceed?’

Greg says this lightly, but I’ve heard it before – when actors keep him waiting to say yes or no to an offer – and I know he’s running out of patience. My inability to make a decision means that we’re both stuck to the spot. He can’t move on: find another Falstaff, or cast the other parts. If it was another director, I wouldn’t care about their problems – this is too important a decision for me – but it isn’t another director, it’s Greg.

Isn’t that reason enough to do Falstaff – a work project so big I’ll not be bored for years?

No. It isn’t enough.

Then what about the simple fact that it’s another great Shakespeare role? I’m proud of the Shakespeare notches on my belt, and here would be one more, a giant one, a fabulous one, and one I never dreamed of. How could I not do it?

Well, why didn’t McKellen or Jacobi do it? They’ve both spent their careers notching up a line of Shakespeares, and they’ve done their Lears now, and there’s nothing left. What was it about Falstaff that they shied away from? Maybe a generational thing. They’re the last group from a theatrical tradition which said that, for the classical actor, certain roles (like Hamlet, Macbeth, etc.) lead to Lear, while others (like Touchstone, Bottom, etc.) lead to Falstaff, and never the twain shall meet.

This is a blind alley. You can’t judge yourself against other actors.

What is it then? Why is this decision harder than any other?

Look at the eyes in the portrait. Half-closed. Defensive.

The thing I’ve said again and again is that I don’t want to be laughed at.

And here I am now, with Falstaff – being offered not just a good part, but a great one, in two plays which are not just good, but great. And am I seriously farting and faffing around, wondering whether to do it or not?!

Fuck tradition, fuck the normal notions of who should play Falstaff, fuck its status as an iconic role, fuck the fact that I’m not fat enough or tall enough or whatever…!

I’m a character actor, and this is the greatest character part ever written. It presents me with a tremendous feast of the kind of acting that I like best, that I do best – it’ll take all my imagination and creativity to invent his shape, his voice, his very being, and I will enjoy doing that. And yes, it’s a humungous job, and will feed my workaholism to the limit, and that is important, and I’ll enjoy that too. And Greg and I will be working together on Shakespeare again, and I will especially enjoy that. 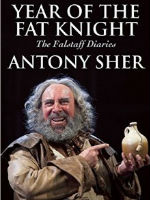 Year of the Fat Knight comes thirty years after Antony Sher published Year of the King, about his experience playing Richard III for the RSC, which has since become a classic of theatre literature. According to publishers Nick Hern Books, Year of the Fat Knight “is destined to rank with the Year of the King as one of the most enduring accounts of the creation of a giant Shakespearean role”. It’s hard to disagree. The hardback is priced £16.99 and there are a limited number of signed copies available.

The relationship between Antony Sher and Greg Doran isn’t the only one fuelling the success of both Death of a Salesman and Henry IV, Parts 1 and 2. A striking one has also developed onstage, and seemingly off, between Sher and his young co-star, Alex Hassell.

The father-son connection between their characters in both plays is critical. In the Shakespeare, Falstaff is like a second dad to Prince Hal, while in the Miller, Willy is Biff’s actual dad, however strained and destined to disappoint their relationship is.

The RSC is a big family, they say. So it seems. 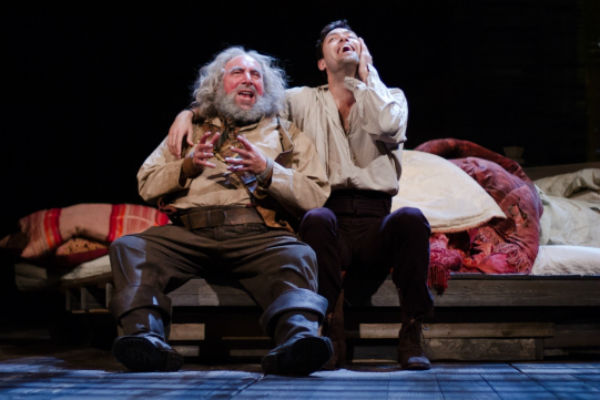 Anthony Sher and Alex Hassell as Falstaff and Prince Hal in Henry IV, Part 1 for the RSC 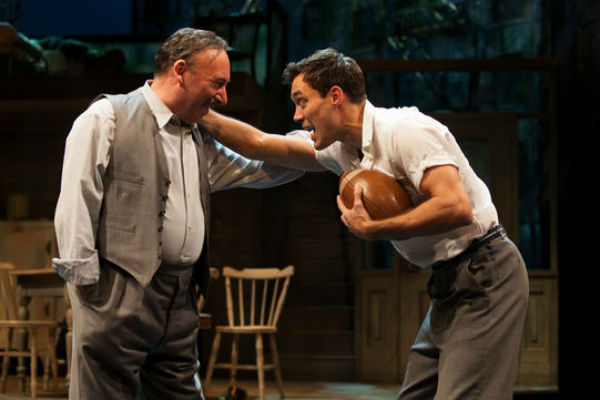 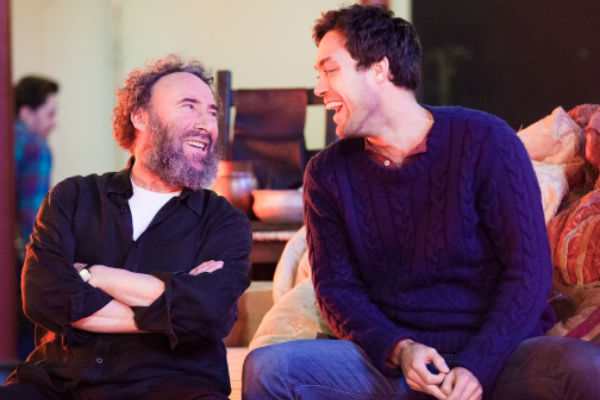 Antony Sher and Alex Hassall as … themselves. In rehearsals for the RSC

Death of a Salesman continues its limited season at the West End’s Noel Coward Theatre until 18 Jul 2015.

At the end of the year, as part of the King and Country season at the Barbican Centre, and specifically as part of the RSC’s mounting of Shakespeare’s “Great Cycle of Kings”, Henry IV, Parts 1 and 2 are reprised, with Sher and Hassell, from 12 to 29 December 2015.