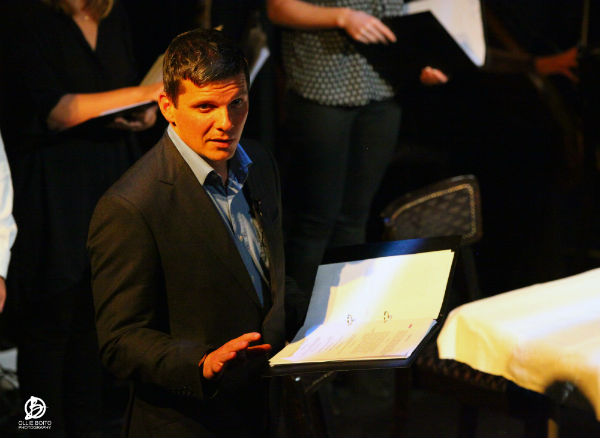 I usually prefer to spend Sunday nights in winter holed up at home, but I was glad to make an exception – especially thanks to the considerately early start time of 5.30pm – last night for The S and S Award gala at the St James Theatre. As I previously wrote, this is an annual award that is relatively new (inaugurated in 2012), but the event itself is completely new to me, as last night was the first time I’ve managed to make it. And I’m so glad I did.

The S and S Award is presented to the best (as-yet) unproduced musical of the year and the prize – a week-long workshop retreat with an experienced director and cast – makes it highly likely that the winner will be professionally produced very soon indeed. As with Katy Lipson‘s annual From Page to Stage season, the Award gala also offers an important showcase in front of an industry audience.

This year’s Award went to the all-female (yeah!) writing team of Alex Young and Kate Marlais for Here, which is set in Cumbria in 1943 and inspired by the life of German artist Kurt Schwitters who fled there to escape Nazi oppression. Based on the extracts I heard and which were so enthusiastically received at last night’s gala, I think we’ll be hearing much more from Alex (who even had to step in and perform one of the part’s when actor Katy Secombe was taken ill) and Kate.

And, ditto, the other two finalists: After Lydia, by Christine Denniston and Gwyneth Herbert, adapted from Terence Rattigan’s play about a woman dying of leukaemia; and Brett Sullivan‘s comedy The Last Word, which centres on a group of slacker (and Scrabble-loving friends) from Cleveland, Ohio. I was impressed by all three: the music, the intriguing (and wildly varied) subjects and the strands of finely tuned humour shot throughout.

Roll on, The S and S Award 2016 – I definitely won’t be missing this important annual event in future.

The S and S Award gala was hosted by Mercury Musical Developments, directed by Simon Grieff and attended by a host of stars and “industry luminaries” (imagine a little eyebrow-raise from host on that line…). Here are a selection of photos, care of Ollie Boito.