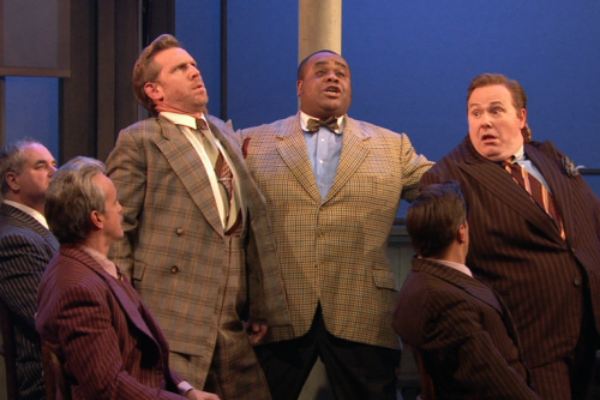 Clive Rowe reprised his “Sit Down, You’re Rocking the Boat” for the National Theatre’s 50th anniversary celebrations in 2013

For years Guys and Dolls has been all but ruined for me: that’s what happens when you are lucky enough to see a definitive production and performance. I speak, of course, of Richard Eyre‘s legendary National Theatre revival of this 1950 roadway classic. And, what’s more, I didn’t even see the original. (Much referenced by other critics in my Press Pass blog today.)

As Dom O’Hanlon writes in his production history piece for London Theatre Guide, this was a production that has history even in its conception. The idea for the National to stage Guys and Dolls dated back to the its first artistic director, Laurence Olivier, more than 25 years before I saw it:

“Perhaps the most iconic revival of this hit musical came from the mind of Olivier, who had wanted to mount a production at the National Theatre in London, which was then housed at the Old Vic, back in 1971. The production was called off due to Olivier’s ill health, but the project was picked up again by Richard Eyre in 1982 in what he called a ‘re-thinking’ of the classic show. Using a heavily neon-lit set, new orchestrations and some impressive choreography, this revival broke all box office records and became an overnight hit.”

That Olivier Award-winning production moved on from the South Bank to tour to the West End, running until 1986. Ten years later, Eyre retrieved the set from the storeroom and staged the production again at the NT’s South Bank home, near the end of his tenure there as artistic director. That’s when I had the pleasure, in 1997. The cast I witnessed was led by Henry Goodman as Nathan Detroit, Imelda Staunton as Miss Adelaide, Clarke Peters (returning to the role) as Sky, Joanna Riding as Sarah and – providing unforgettable, award-winning support as Nicely-Nicely Johnson – Clive Rowe.

Whenever I hear something described as show-stopping, it’s Clive’s rendition of “Sit Down, You’re Rocking the Boat” I think of. At the matinee I attended, my memory is that the rapturous audience showered it the number five standing ovations – the show, literally, could not go on, first, because the audience would not allow it and, then, by the sixth reprise, because the actors were nearly limping with exhaustion. (Clive and I later became friends and he tells me that, the truth, according to show reports, was that the maximum number of ovations per performance was “just” four – but I still swear five.)

Fittingly, Clive and other members of his crap-shooting crew gave a special one-off reconstruction of “Sit Down, You’re Rocking the Boat” for the National’s 50th anniversary celebrations in 2013. (I love watching the clip, but it still doesn’t do my 1997 memory of it justice.)

It’s hard for any musical theatre actor’s performance to rival this one for me, but for any musical theatre actor to take on the role of Nicely-Nicely Johnson and try to do it – well, it’s an impossible feat. No disrespect to Michael Grandage or anyone involved in his 2005 West End revival, but any attempt to do so that I’ve seen since has just left me disappointed, if not downright angry with audiences applauding the effort but having no clue at to just how ferociously the boat can be rocked.

Well, massive credit to director Gordon Greenberg for this Chichester Festival Theatre Guys and Dolls and to Gavin Spokes who, undaunted by any Clive association with the role, attacks Nicely-Nicely with big-hearted, small-egoed gusto. In these hands, “Sit Down You’re Rocking the Boat” is once again a proper showstopper with Spokes leading the charge: rallying the repenting gamblers (chair-climbing choreography by Andrew Wright), scatting with Lorna Gayle‘s General Cartwright and waving a jolly flag at Satan.

Though I didn’t leap to my feet, I did join the rest of the Wednesday night’s opening audience in cheering and whooping and demanding (was it two?) reprises. It didn’t quite live up to my cherished memories, but it came very close and made me fall in love with Nicely-Nicely anew.

Thank the Lord, I have been saved. 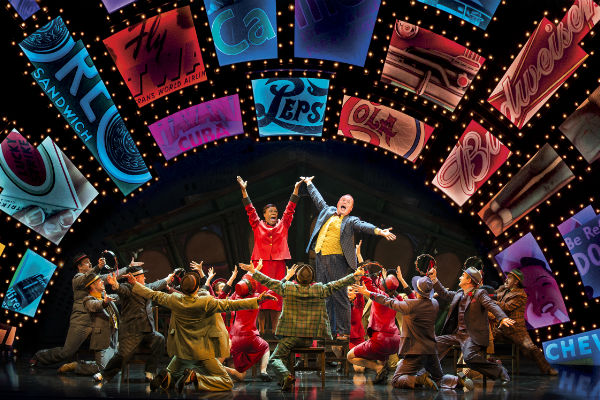 Lorna Gayle, Gavin Spokes and the 2016 company of Guys and Dolls perform “Sit Down, You’re Rocking the Boat”. © Paul Coltas