Why is Jamie Lloyd and Martin Freeman’s Richard III set in a 1970s open-plan office?

Why is Jamie Lloyd and Martin Freeman’s Richard III set in a 1970s open-plan office?

When the production shots for Richard III were first released earlier this week, showing that director Jamie Lloyd had located the Bard’s bloody history play in a 1970s office block, my interest was piqued.

After seeing the show at Tuesday’s opening night, my first reaction was to describe the resulting effect as “Get Carter meets The Office”, accentuated by the casting of Tim from The Office, aka actor Martin Freeman, in the title role – or rather Tim’s evil twin with a bad hangover and a hunchback.

It was only after I got home and read the programme that things became crystal clear and my appreciation for Lloyd’s conceit fully ripened.

“All you can ever do as a text-based director is to begin with an imaginative response to the words on the page,” Lloyd writes. In this case, “the main starting point of this production was a joke that referenced Richard’s opening line: Why don’t we set it just after the 1979 Winter of Discontent?” 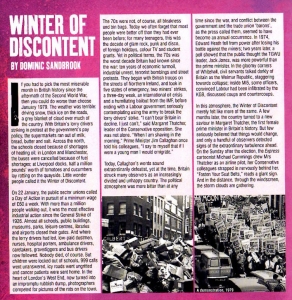 A programme note from Richard III

From that comes the production’s vision of a dystopian Britain set in the “apocalyptic” 1970s, where widespread strikes and Parliamentary tribal divisions led to coups within the Labour government and the ushering in of Thatcherism. A brutalist shake-up amongst the politicians and their bureaucratic, civil servant lackeys in the drab corridors and backrooms of Westminster power.

Amongst the news photographs of the day littered throughout the programme are also period film shots of war and conference room scenes from Tinker Tailor Soldier Spy and Stanley Kubrick’s Dr Strangelove.

Other influences, Lloyd explains, are even more contemporary: “Inevitably, for Shakespeare always speaks to our times, events in the news chimed with our narrative as we rehearsed.”

And so the team found echoes in the script, and drew them out in the performances, with embittered virgin university student Elliot Rodger who embarked on a killing spree in Santa Barbara, California (“…since I cannot prove a lover…I am determined to prove a villain,” says Richard), the military coup in Thailand and Kim Jong-Un’s North Korean dictatorship all making their mark.

“Ever since I hit puberty, I’ve been forced to endure an existence of loneliness, rejection and unfulfilled desires all because girls have never been attracted to me. Girls gave their affection, and sex and love to other men but never to me.” – Elliot Rodger, May 2014

It’s a fascinating conceit. The office block in which this Richard III is set seems like a vengeful, possessed character in its own right. The lift in particular speaks its mind with dinging indignation and spookily incongruent canned music, and danger lurks in even the most innocuous office appliances – telephone cords, swivel chairs, tape recorders and headphones, desklamps and a very murky fishtank all prove perilous. Where or where were the deadly stapler and Post-it notes, I wondered? (Trivia check: Post-its were invented in 1977.)

I found the onstage deaths by strangling, poisoning and drowning the most gruesome, but I must report that the production also delivered on Lloyd’s bloody promise, and after my recent chats with fake blood supplier Pigs Might Fly, it delighted me to see their Nick Dudman product spurting across shocked theatregoers in the front row. (Don’t worry, folks, it washes out.)

For more insight into Jamie’s creative process, have a watch of the interview below that he gave with Matthew Amer at last month’s West End Live – the blood blog gets a mention too!