Why do we love celebrating Stephen Sondheim so much?

Home-Why do we love celebrating Stephen Sondheim so much?

Why do we love celebrating Stephen Sondheim so much?

Next weekend, the 85th birthday of American composer and lyricist Stephen Sondheim will be marked (albeit, somewhat belatedly – his actual birthday was on 22 March) in grand, celebratory at the West End’s 2,000-seat Theatre Royal Drury Lane, care of the Sondheim Society.

The company of HEY, OLD FRIENDS! An 85th Birthday Tribute to Stephen Sondheim reads like a who’s who of musical theatre legends. In addition to Julia McKenzie (who won an Olivier for the 1993 London revival of Sweeney Todd and has also starred in the London premieres of Follies and Into the Woods) and Millicent Martin (star of the original Side By Side by Sondheim in London and New York, who is flying in specially from her home in Los Angeles), there will also be:

And they’ll be accompanied by a 40-piece orchestra and a 50-strong ensemble from ArtsEd, directed and choreographed by Bill Deamer with musical direction by Gareth Valentine. It should be quite a night! I’m looking forward to it.

Meanwhile, last weekend, on quite the other end of the scale, at the 70-seat Ye Olde Rose and Crown pub theatre in Walthamstow, east London, I witnessed Sondheim being celebrated in more traditional fashion: with a spirited fringe revival of one of his best-loved works: 1973’s A Little Night Music.

Inspired by Ingmar Bergman’s 1955 Swedish film, and with a book by Hugh Wheeler, A Little Night Music is set amongst the aristocracy circa 1900 and centres on the complicated romantic lives of several couples, which become increasingly tangled and eventually untangled over a weekend in the country (and, for the record, the Act One closer “A Weekend in the Country” is my favourite song from this show, which also includes heartbreak classic “Send in the Clowns”).

A Little Night Music is a big ask for a small space and a small budget. But director Tim McArthur doesn’t shy away from the challenge in this All Star Productions revival. He manages to ably manouevre [with the help of choreographer Simon Fielding] his 16-strong cast, while also creating within the story a kind of Greek chorus of forest sprites who observe and help drive the action. 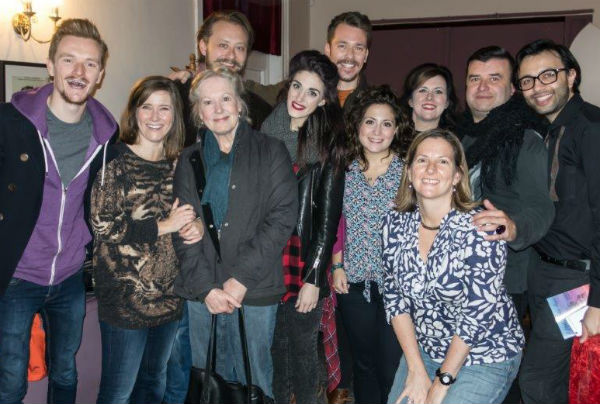 Me with members of the A Little Night Music cast after the Sondheim Society post-show Q&A on 11 October 2015. © David Ovenden

The Sondheim Society also had a hand in the performance of A Little Night Music I attended: hosting a post-show Q&A with Tim and the company. The talk of why actors so love performing Sondheim – because of his facility in combining music, lyric, journey and finely drawn characterisation – seemed a perfect preview to Hey, Old Friends too. Here are some of my favourite quotes from the cast.

“The only Sondheim I’ve done before was a concert at the St James Theatre, but he’s my favourite. What draw me to Sondheim is that it’s a play that continues through song. ‘Every Day a Little Death’ is a journey. It’s acting that just happens to be sung.” – Jamie Birkett, who plays Countess Charlotte Malcolm

“When the lyrics and the music fit together so well, every time I sing it, I discover something new and surprise myself.” – Alexander McMorran, who plays Fredrik Egerman

“Like Shakespeare, he makes good sense. So, while it’s complicated, it’s easy to remember… I’ve been in plays so poorly written that learning the lines is like wading through treacle.” – Lindsey Murray, who plays Madame Armfeldt

“Every character has their defense mechanism. Desiree laughs everything off. That’s what all actors. That’s why people like to be around actors because they are all full of joy and they don’t share their emotions all the time.” – Sarah Waddell, who plays Desiree Armfeldt

The All Star Productions’ revival of Sondheim’s A Little Night Music continues at Ye Olde Rose & Crown, Walthamstow until 31 October 2015.