What if every day were #Shakespeare400 and London Marathon?

Home-What if every day were #Shakespeare400 and London Marathon?

What if every day were #Shakespeare400 and London Marathon? 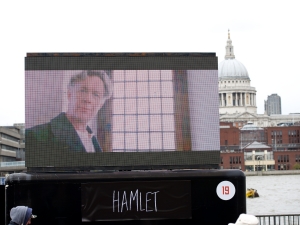 The Complete Walk along the Thames to Shakespeare’s Globe on 24 April 2016. © Peter Jones

Celebrations for an important family milestone – my partner Peter’s mother’s 70th birthday – prevented me from taking part in festivities around the 400th anniversary of the death of Shakespeare on the day itself yesterday. But I’ve had fun catching up on some of it today.

The Globe’s Complete Walk was a fantastic cultural installation along the south bank of the Thames in London, a short walk from my flat. I always love strolling along the stretch of the river east from Blackfriars Bridge and what a bonus to be able to pause at regular intervals to catch great short films – 37 films, one for each of Shakespeare’s plays – until we reached the theatre itself, it’s imposing gates festooned with red and white roses.

Snippets of Hamlet, Henry V, As You Like It and Julius Caesar delivered by some of my favourite actors – including Alex Jennings, Michelle Terry, Ashley Zhangazha, Jamie Parker and Will Keen – is an enrichment to any Sunday. Why must it come down this weekend? Why not make it a permanent Bankside installation? 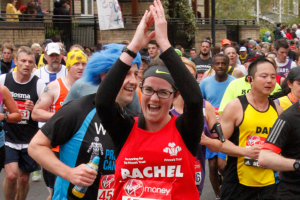 Not Shakespeare-related, but Peter and I also took up our annual viewing position on the opposite side of the river at Blackfriars Bridge for a spell of cheering on the courageous London Marathon runners. We got this year too late to catch our fleet-footer friends – including #TeamWestEnd producer Ros Povey – but we were happy to applaud and shout out for strangers. All you Rachels and Pauls and Cindys and Matts and Leslies and Tonys and every other name and shape and size and age and race and creed. What a glorious cross-section.

Every year watching the marathon, I get choked up. Apart from being awed and humbled by the ordinary people struggling their way around the marathon route – and our viewing point is in the last two miles so they really are struggling by this point – I am moved by the crowds who turn up in huge quantities and cheer themselves hoarse. I’ve run a few races myself – 10ks and half-marathons only, mind – and I know personally how much that support can spur a person on.

Wouldn’t it be wonderful if, in the race of life, we could have strangers cheering us along every step of the way?

My appetite fully whetted, I switched on BBC Iplayer to catch up on another massive group effort/marathon effort: last night’s broadcast of Shakespeare Live! From the RSC. If the Donmar Warehouse’s The Vote was the theatre televisual event of 2015, this must surely be the equivalent for 2016 if not the decade.

The Hamlet sequence – with Tim Minchin, Benedict Cumberbatch (or was it Eddie Redmayne?), Harriet Walter, Rory Kinnear, Ian McKellen, Judi Dench (“it is I, Hamlet the Dame”) and, ultimately, the Prince of Wales advising the RSC’s current Hamlet Paapa Essiedu on which word to emphasise in the “To be or not to be” soliloquy (hint: there’s no skull in this bit) – was hilariously sublime.

In the evening, hosted by David Tennant and Catherine Tate, reunited after their West End pairing in Much Ado About Nothing, other memorable highlights for me included, in no particular order: Rufus Wainwright’s sonnet set to music; Judi Dench’s Titania lusting after Al Murray’s Bottom; Henry Goodman and Rufus Hound’s gangster duo spivving their way through Cole Porter’s “Brush Up Your Shakespeare” from Kiss Me, Kate, with very cheeky asides directed at Prince Charles and Camilla; spoofing with the Horrible Histories crew; and the event’s West Side Story opening number, performed by students of Arts Ed and the Urdang Academy (how excited must they have been?!).

As with the Globe films, it was also wonderful just to see so many great stage actors given such a major platform to display their classical craft. And there were some inspired RSC casting ideas, for which we must demand full-scale productions, including: real-life husband-and-wife Sanjeev Bhaskar and Meera Syal as Benedick and Beatrice in Much Ado About Nothing, Roger Allam as King Lear and Rory Kinnear and Anne-Marie Duff as Macbeth and Lady Macbeth.

Such major events by the likes of the RSC and Globe aside, I think, for me, the most effective means of marking #Shakespeare400 and showing, four centuries on, just how relevant the Bard remains – and another platform for a great actor – was care of BBC Newsnight. On Friday night’s programme, each story was preceded by a relevant Shakespeare quotation, powerfully performed by Akiya Henry (most recently seen onstage in Twelfth Night at the Globe). Fantastic.

I’m sure that Will would have approved. Happy Birthday, Shakespeare.

You can view Shakespeare Live! From the RSC on BBC iplayer here.