What I learned today: Why film noir is so prudish

Home-About Terri – Personal Blog - What I learned today: Why film noir is so prudish

What I learned today: Why film noir is so prudish 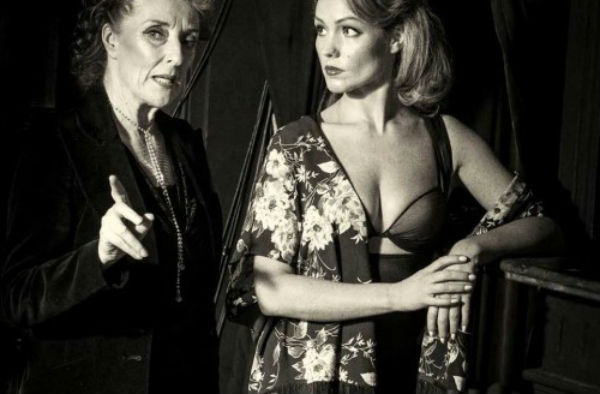 Judith Paris and Susannah Allman in In the Dead of Night at the Landor Theatre, May 2015.

I’m having trouble shifting my black mood since the 2015 General Election (what would Tony Benn say?!) so why not a suitably dark blog subject to match it? Let’s talk about film noir.

Film noir literally translates, from the French, as black film or film of the night. If you watch films from ‘the past’, you’ll know that it applies to a certain type of Hollywood crime drama from the 1940s and 1950s. Why a French name for an American creation? Because it was a French film critic, Nino Frank, who coined the phrase.

In fact, American filmmakers didn’t use the term, or indeed, readily identify the films they created as part of a genre at all. It’s a hindsight classification, but one that now seems very clear. 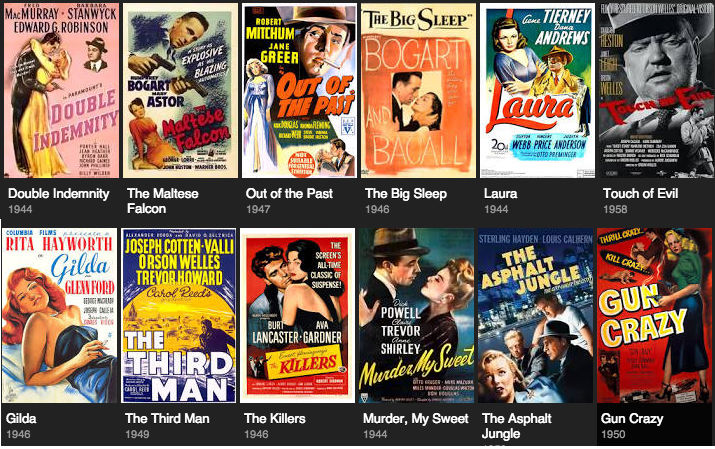 Some of the best known, film noir classics

Whether you’re a film buff or not, if you’ve seen more than three of these and other film noir classics, you could make a good stab at listing its key characteristics:

What I didn’t know, or hadn’t readily guessed, about film noir was how much the genre (as it came to be known) was influenced by the morality of the day. Given that these are films soaked in crime, gin and other sticky substances, it seems counter-intuitive to think of them as prudish – but in fact, they were subject to all sorts of prudish controls and prejudices. And it was partly due to their need to subvert such restrictions, as laid out in the “Hays Code”, that contributed to many of the characteristics above.

Why is a theatre geek like me writing about this? Because a new stage play pays homage to this classic screen drama.

In the Dead of Night, written and directed by Claudio Macor, bills itself, in the style of period trailers, as “live on stage and uncensored!” Macor created the 2013 musical The Tailor-Made man, which told the true-life story of William ‘Billy’ Haines, the MGM silent screen star whose career came to an abrupt end in the 1930s because of his openly-gay lifestyle. He ended up quitting acting in 1935 and becoming an interior designer, starting a business with his life-long partner Jimmie Shields.

While researching The Tailor-Made Man, Macor interviewed many veterans of 1940s and 1950s Hollywood, including Daniel Meyer Selznick, son of producer David O Selznick and grandson of MGM boss Louis B Mayer, and was given “first-hand insight into the machinations of the Studio System, its rules and regulations and above all the infamous Hays Code, which censored everything from kisses to dancing”. 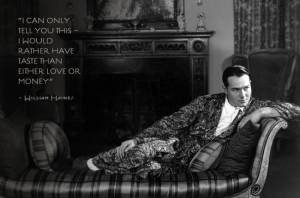 With the onset of the “talkies”, the morality of Hollywood had become a political issue, leading to the Supreme Court ruling that “freedom of speech” did not apply to motion pictures. In an effort to self-regulate, and keep the even stricter moral guardians of Washington, DC, out of its business, the Motion Picture industry decided to implement and impose its own code.

The resulting Hays Code – named after Will H Hays, a Presbyterian minister and head of the Motion Pictures Producers and Distributors Association, who drew it up – was in force in Hollywood from 1930 to 1968.

Screen inspires stage In the Dead of Night

This new insight got Macor thinking: “What would the film noir genre be like if writers and directors had free rein? Free from the censorship, free from bombastic studio moguls, free from the production code and, above all, free from the dreaded fear of the box office of middle America?

“Would such classics as Gilda, Double Indemnity, Sunset Boulevard, The Maltese Falcon, Mildred Pierce, and of course, Casablanca have shown a ‘warts and all’ world if they were allowed? Would they have explored the true nature of the underworld? Would they have dared to touch upon difficult subject matters? Would they have allowed crime to pay? The response to these questions is In the Dead of Night.”

And so, while In the Dead of Night contains most of the familiar film noir elements above, which may fool you into thinking that it’s an adaptation of a screen original you definitely saw at some point, it’s an original stage play. 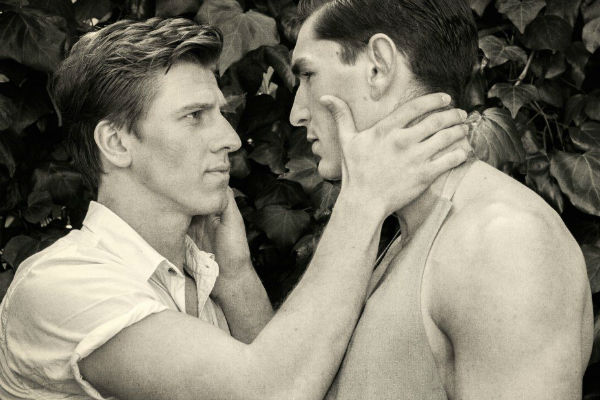 Matt Mella and Jordan Alexander in In the Dead of Night at the Landor Theatre, April 2015.

However, crucially, unlike all the real film noirs, in In the Dead of Night, the love story at the centre of the action is a gay, and emotionally moving, one (between super-hunky Jordan Alexander and Matt Mella). And there are several other key subversions of the Hays Code. Associate producer David Orchard explains:

“The code contained 11 things specifically forbidden and a further 25 ‘be careful’ items which forbade everything from nudity and weapons to ‘heavy petting’ and ‘showing sympathy for criminals’. The result was that homosexuality was obliterated, married couples slept in separate beds, and tough, murderous gangsters were not allowed to swear. Gritty novels and plays had much of the sex and violence removed when they made it to the silver screen as film noir classics…

“With In the Dead of Night, Claudio has set out to show all the earthy reality of film noir unencumbered by the Hays Code – drugs are dealt, couples dance sensually, passionate love between two men is shown openly and unchallenged, pillow-talk is frank and graphic, and crime is seen to pay. We’re pleased to say that our play breaks almost all of the 36 rules!”

Back in 20th century Hollywood, as time passed, the Code was relaxed, and in 1968, it was replaced completely by the film rating system that is still used today.

In the Dead of Night continues at south London’s Landor Theatre until 16 May 2015.

In the Dead of Night