What I learned today: How to get the best bits of church with pop songs and no mention of God

Home-What I learned today: How to get the best bits of church with pop songs and no mention of God

What I learned today: How to get the best bits of church with pop songs and no mention of God 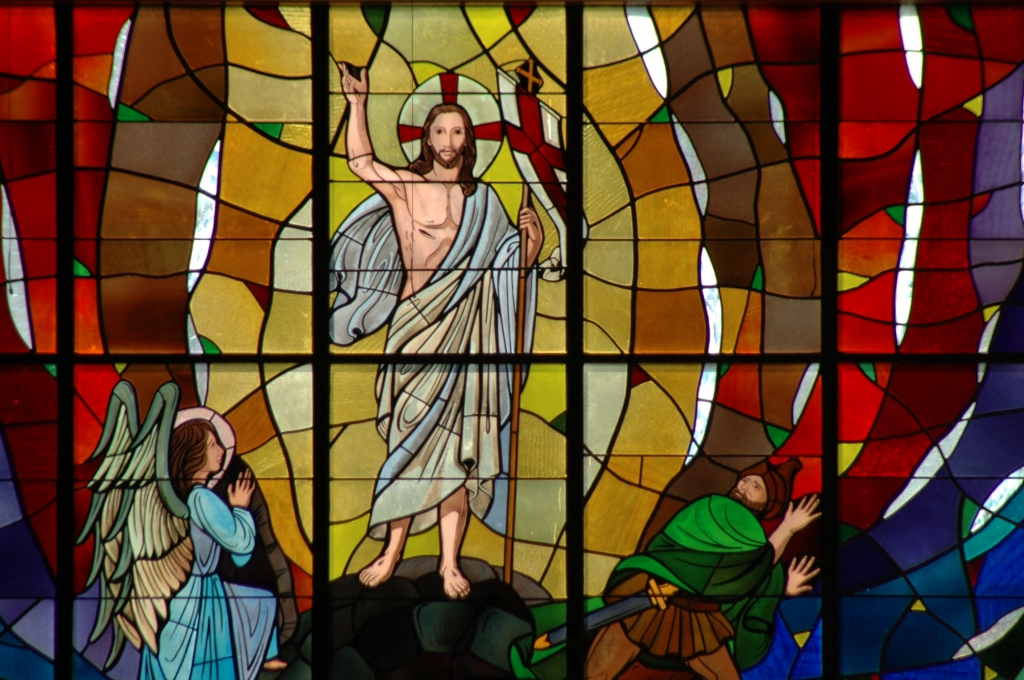 Jesus has left the building at the ‘godless’ Sunday Assembly services

Having just posted about St Paul’s Cathedral, it may seem a little odd to immediately follow up with an apparently “anti-church” blog, but I did warn you that my topics, and the scheduling of them, would be random as part of this month’s challenge! So here goes on today’s… I have many deeply religious relatives back in the US, dotted along the Bible Belt (Georgia, Mississippi, Alabama, Texas, etc). I love them dearly, even though I’m pretty certain they believe I’m going to hell.

I quietly, without any fuss, gave up on religion years ago. In truth, it never really found me. My father was a career Army officer so we moved around a lot. Depending on the post where we were stationed, and how amiable the chaplain was there, we started or stopped attending chapel. And then I left home for college and – weddings, funerals and very occasional christenings and Christmases (with the relatives) apart – that was the end of my churchgoing.

In London, I have one close friend who identifies himself as a churchgoer or, indeed, religious (he’s Catholic) in any way. I move in unquestionably secular circles, which I imagine is the same for most Londoners.

But, here’s one for the confessional. I do miss going to church. Not for the religion, but for the community, for the ritual, for the reflection time and for good, thought-provoking talks (a.k.a. as sermons when it’s a preacher giving it).

And guess what? I’m not the only one. Hallelujah. 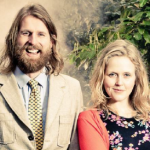 Yesterday, I attended my first Sunday Assembly (@SundayAssembly), which is billed as “all the best bits of church, but with no religion and awesome pop songs”. In London, it takes place every other Sunday at 11am at Conway Hall in Red Lion Square, overseen by co-founders Sanderson Jones (@SandersonJones) and Pippa Evans (@IAmPippaEvans) who are also comedians – and bring a wonderful, but respectful, levity to proceedings).

The Sunday Assembly “service” had all the trappings of those Protestant Sundays of my youth, but with no mention of God or the Bible, and far more joy and spirit. There was a choir (and a band); we sang Pharrell Williams’ “Happy” and Madness’ “Our House” (with frenzied dance breaks) rather than hymns; guest speaker Loyd Grossman (@loydgrossman) inspired us to ponder the beauty of old buildings (could we not deconsecrate Westminster Abbey for future Assemblies? Gothic churches are the definition of architecturally uplifting, even for non-believers, he suggested); there were other ruminative contributions from poet Joolz Spark, a woman named Amanda who was set the “trying your best” congregation challenge to respond to the week’s theme (buildings, this time) and shaggy, happy Sanderson; community announcements; a family corner for the kiddies; a collection for donations; and tea and biscuits in the foyer afterwards (followed by beer in the pub). 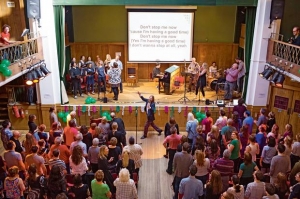 The congregation sings along, karaoke-style, to pop songs rather than hymns

The Sunday Assembly motto, by the way, is “Live Better, Help Often, Wonder More” and it targets itself at “atheists, agnostics and freethinkers). Values and faith are not the sole preserve of religion, after all. And Sunday congregation no longer is either. (Though it’s a little bit of scheduling genius to have it every fortnight rather than every week, if you ask me – so you can still have plenty of indulgent Sunday lie-ins without missing out or feeling guilty.)

It was fantastic fun! I will definitely be going again. Why don’t you pull up a pew and meet me there?

(P.S. If you’re not in London, do still check out the website. The movement has gone global, and there are events all over the place, many of them in former churches. If there’s not one in your area, read the charter and start your own!)