What I learned today: Hopi ear candles are a con (probably)

What I learned today: Hopi ear candles are a con (probably) 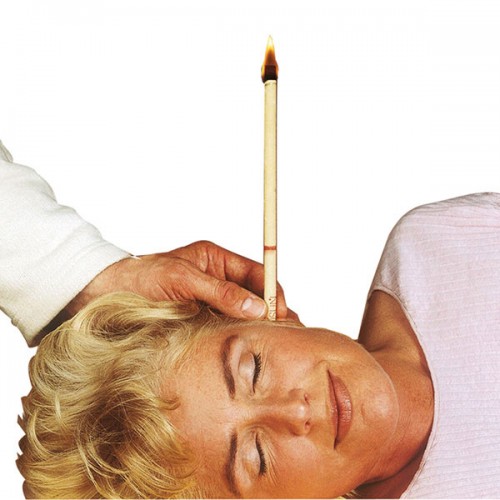 I first came across Hopi ear candles about 15 years ago at a new age festival at Alexandra Palace in London where an exhibitor was selling, for my pocket, far-too-pricey therapy sessions. Shortly after, while at a meeting in Willesden Green, I happened upon a homeopathic shop that stocked ear candles by Biosun, the leading supplier since 1986, and I snapped up a supply to use at home.

The “candles” are wickless, hollow tubes, about 22cm long, usually made from cotton, flax, beeswax and infused with St John’s wart, chamomile and other “aromatic essences”.

I was advised not to use them alone but, as I was living alone at the time, I simply positioned a mirror so that I could monitor myself and ensure I didn’t singe my hair or set the flat on fire. I lay on my side, inserted a candle into an ear, lit it and let it burn down for about ten minutes until it reached the red marker finish line, then flipped over and did the other ear. I quite enjoyed the experience, particularly the snap-crackle-popping sounds and the warmth generated inside my ears.

And I was absolutely convinced the candles were sucking out earwax build-up. After extinguishing the candles, I delighted in slicing open the unburnt stub remainders of the candles, beneath the point where a filter separates the bit that goes in your ear from the flaming bit (this may sound dangerous, but it’s a very small, contained flame, promise), to examine the dusty knobs of wax that had been sucked up out of my ear.

After I used up my five pairs, however, I discontinued the practice – even without having to pay a therapist, the candles were expensive and, as I didn’t live in Willesden Green (that’s in North-west London, non-Brits), in those pre-Amazon ubiquity days, they were hard to come by. 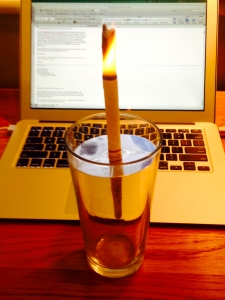 Testing the ear candle in my home laboratory

Fast-forward to a few weeks ago when ear candles came up in conversation a few weeks ago with my singer friend, we’ll call him Ray, who has been using them for seven years. My enthusiasm was sparked again and my partner Peter, an ear-candle virgin, was keen too. A Google search, point, click and credit card later, and a set of ten pairs was winging its way to us in the post.

We candled each other the night they arrived – no mirror required this time – and, after gleefully examining the wax evidence, started our own evangelising.
And then we discovered this article on Wikipedia, which roundly debunks ear candling or, to give it its more pseudo-scientific name, thermal-auricular therapy. Amongst the article’s most damning assertion, for myself and Peter: the pleasingly gunky residue left over isn’t sucked from your ear at all, but produced by the burning of the candle itself.

No way, said Ray, when I told him; if it was the candle, the amount wouldn’t vary from ear to ear, session to session.

I decided to test it for myself in the laboratory-like conditions of my home office. I lit a candle, placed in a glass, watched it burn and afterwards … I am sad to report that there was more earwax-appearing gunk in that unmanned candle than either Peter or I produced. 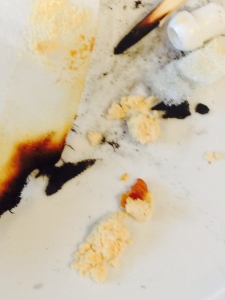 The candle alone produced more apparent earwax than a human

Back online, Biosun and candle proponents have various explanations for this (most of the ear toxins are burned off through the chimney, for example) as well as answers to other allegations including that the native American Hopi tribe have denied all connection to ear candling (the shamans who retain that spoken history are all dying off, they say, and younger Hopis simply don’t know what they’re talking about). And Biosun has produced its own scientific studies in support of ear-candling and its positive effects on your body and aura.

Ray still swears that candles cure his tinnitus, and I still think the experience is pleasant and mildly relaxing. But, I just can’t get over the fake earwax gunk…

If you’re curious enough to want to try ear candles yourself, for goodness sake, don’t be fooled by anyone saying it’s too dangerous to try at home – that’s nonsense – and don’t pay through the nose to have an ‘thermal-auricular therapy session’. At average prices of £35-55 for a drawn-out 45-60 minutes of no more than 20 minutes burning, that really is a con when you can now get a set of five pairs for as little as £2.99 on Amazon.