What do the Old Vic and Labour Party regime changes have in common?

Home-About Terri – Personal Blog - What do the Old Vic and Labour Party regime changes have in common?

What do the Old Vic and Labour Party regime changes have in common?

I’ve witnessed at first-hand two regime changes over the past few days and curiously they have a man in common: Ed Miliband. 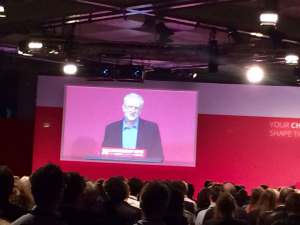 My view of Jeremy Corbyn’s acceptance speech on Saturday

The political regime change, the announcement of Jeremy Corbyn as Miliband’s Labour Party leadership successor, has of course dominated the news this weekend. As a Labour Party member myself – and one who attended yesterday’s special conference at Westminster’s Queen Elizabeth II Centre as a delegate of my Constituency Labour Party (Bermondsey and Old Southwark in south London, if you’re interested) so did genuinely witness the announcement first hand – my views on that regime change are mixed to say the least. And, to a very large degree, they’re still being formulated.

I did not vote for Corbyn, I do not agree with many of his policies, and I especially do not like how some of his supporters have denigrated Labour MPs and anyone else who has anything but fulsome praise for the “Corbyn Collective”. 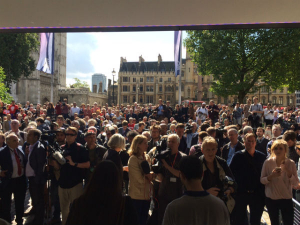 Crowds outside the Labour Party leadership announcement on Saturday

This includes the man distributing socialist pamphlets outside QEII who chanted that “we’ve got our party back” and then spat at a middle-aged female party member when she suggested that we’d never “lost” it; the man (possibly the same one) shouting “fuck off back to Eton, Blairites” at MPs when they exited the building; and those on Twitter referring to other MPs as “Tory scum” or, in the case of Jewish MP Ivan Lewis, “Zionist scum”.

Still, Corbyn has been elected the leader of a party I’m proud to be a member of, so I’m hanging in – going to conference in two weeks’ time – and hoping for the best. And also planning to get fully behind Sadiq Khan’s campaign for London mayor….

Across the river and back to theatre

About the other regime change, which took place across the river from Westminster, on The Cut in Waterloo, I can be absolutely unequivocal: Matthew Warchus is off to a rip-roaring start in his tenure as the new artistic director of the Old Vic.

That Warchus’ reign was going to be much different to that of his predecessor, Hollywood import Kevin Spacey, was previously apparent, of course: his very appointment announcement was cause for excitement (thanks to his impeccable reputation with myriad hits at the RSC, in the West End, on Broadway) followed in April with his ambitious, wide-ranging and far-reaching inaugural programme plans.

And on Thursday, the Warchus Old Vic was officially launched with Tamsin Oglesby’s Future Conditional. It’s a seriously confident statement of intent: the world premiere of a big cast, big themes, state-of-the-nation play – or, to be more specific, a play about the state of the education system in our nation which, as the title alludes to, will influence equality conditions for great swathes of society at large in the future.

Oglesby’s play reminds me of another new play I loved this year – Jonathan Guy Lewis’ A Level Playing Field (seen at Jermyn Street in April), indeed the very phrase is employed a few times in Future Conditional. But, whereas Guy Lewis’ play set the action entirely in a classroom and made its case firmly from the perspective of a group of students (views of teachers and parents to come in the next two instalments of a planned trilogy), Oglesby attacks the subject from multiple angles from the get-go.

We have a young refugee turned classroom sponge (played by wonderful Nikki Patel in her stage debut), pushy parents squabbling at the schoolyard gates, an inspiring but under-fire teacher (a nicely under-stated Rob Brydon) and a gathering of Westminster wonks (who – and this is not just the politics nerd in me – provide the most interesting drama with their heated policy discussions and, um, flapjack tussles). There’s plenty of food for thought, and that’s not just the flapjacks.

“A fresh, friendly future: I have never felt so welcome at the Old Vic”

And it’s not just the play that marks the Warchus change. He’s given the Old Vic a noticeable internal refurb on all levels: gone are the red carpets, the dark furniture and general grandeur. Now we have whitewashed walls, exposed wood floors and widened-out spaces. The Pit Bar downstairs has also been restyled as the Penny, “an all-day café and late night bar”. (An Old Vic staffer told me how nice it is to no longer have to take coffee meetings down the street at the Young Vic.)

What else? Warchus himself was outside the theatre saying hello to people as they arrived, and after the show, the entire audience was welcome at the opening night party as ushers exit-flyered us with invites. (My grumbling stomach drove me to Gourmet Burger Kitchen instead, I’m afraid – if only I’d got my hands on some of those flapjacks…)

I have never felt so welcome at the Old Vic. Spacey brought bucketloads of glamour to this address, but such glamour, even while it attracts, can also make the rest of us feel a little dowdy, under-dressed and out of place.

Maybe, now I think about it, Matthew Warchus’ Old Vic is an apt metaphor for the ‘new’ new old Labour Party under Jeremy Corbyn. Certainly, if folks feel that the party, and politics in general, are now more open, friendlier, more accessible, more authentic, more varied, more about real people and less about the rich elite … well, those are all good things.

But I started off explaining that Ed Miliband was the common link, not Jeremy Corbyn. Why? Miliband was sat in my row at Future Conditional’s opening, held the evening of the day that voting closed for his successor. I approached Miliband and thanked him (sincerely) for his service to the party and the public – he asked my name, shook my hand and thanked me right back.

It is, after all, perfectly possible to be excited about the future, while still being respectful to and appreciative of the past – or, at least, polite. I hope that the ruder fringes of the Corbyn Collective learn that soon.

Future Conditional continues at the Old Vic Theatre until 3 October 2015.