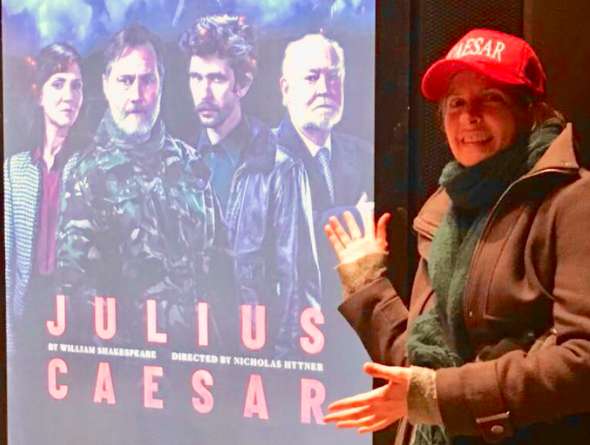 I’ve been raving about Julius Caesar to everyone over the past few weeks, and particularly the experience of seeing it in the pit of the staggeringly versatile Bridge Theatre. This second production in the new 900-seater founded by former National Theatre Nicks Hytner and Starr really flaunts its wide-ranging ambition with this modern-dress Shakespeare.

Okay, okay, I know £25 for an experience you pay just £5 for as a Globe groundling may seem over-the-top, but you definitely won’t get rained on inside at the Bridge, and it really is a fantastic production.

More tips for getting the most out of the experience in my Twitter show vlog on Julius Caesar below. I’ve also rounded up my Twitter vlogs on other London plays I’ve seen recently:

Also scroll down for more pics and tweet thoughts from these and some other recent nights at the theatre, including Alan Ayckbourn’s dystopian future epic The Divide, recently seen at the Old Vic after its premiere last year at the Edinburgh International Festival.

The Lady with a Dog

Given the play’s title, based on #Chekhov short story, this lady had to vlog with a dog. Duty vs true love in b/t the wars Britain? Slightly happier ending for hopeless romantics than #BriefEncounter.#TheLadyWithADog is @WhiteBearTheatr til 10 Mar:https://t.co/tRr1BDKsG9 pic.twitter.com/MAsbRmbz6A

The Lady With a Dog continues at the White Bear Theatre until 10 March 2018.

Robin Hooper’s #FoulPages is a new addition to the historic backstage comedy genre, a la @mrfooteonstage @NellGwynnPlay & of course #ShakespeareInLove. With a design dash of #steampunk & a jaunty curtain call jig. #showvlog pic.twitter.com/4Bkw0DBskW

Foul Pages continues at the Hope Theatre until 17 March 2018.

Still mulling over the two new plays I saw this weekend. Here are more thoughts on @deldridgewriter‘s #ntBeginning & why you should see it at #WestEnd‘s @ambtheatre.

Beginning continues at the West End’s Ambassadors Theatre until 24 March 2018.

Julius Caesar continues at the Bridge Theatre until 15 April 2018.

Okay, The Ungrateful Biped has finished its run at the White Bear Theatre, but here are two videos on it for posterity – including some excretory quotes. I quite liked it and hope it returns!

Also thinking about #TheUngratefulBiped @WhiteBearTheatr. Director @_RupertGraves has attracted the headlines for this one-man play, but it’s writer & performer #PhilipGoodhew who really deserves your attention.

A few more #TheUngratefulBiped #quotes. I challenge you to use the last one in a bad-mannered post-40 way this week. I will. ‘If you don’t like it…’

(Think I flubbed the first btw: should be ‘I’d find it in the dictionary’.)