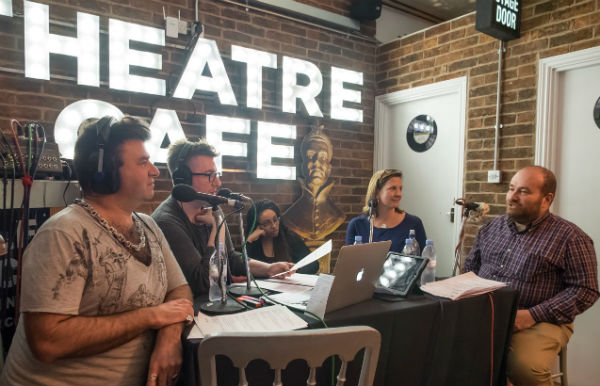 Presenters Tim McArthur and Nathan Matthews interview me and Mark Shenton on Resonance FM’s The Curtain Up Show on 10 April 2015. © David Ovenden

What were your red carpet memories from this year’s Laurence Olivier Awards? 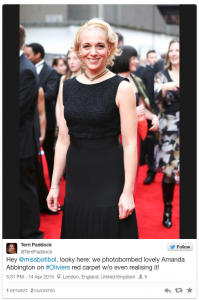 A week before this year’s event on Sunday 12 April 2015, having been quietly dropped from the media invitation list since leaving WhatsOnStage, I wasn’t planning to get very involved in the furore this year – apart from, of course, watching the highlights on ITV and tweeting and blogging my reactions.

Instead, come the day, I found myself in the middle of my own red carpet moment, teetering around in (oh-so-painfully high, super-shiny, patent leather boots) and unintentionally photo-bombing the likes Amanda Abbington with my new best friend, Grimm Tales producer Catherine Botibol (watch out for this lady – more cool theatrical immersion experiences to come).

That was thanks to the wonderful Rich Major, who invited me to attend the Oliviers as a guest of See Tickets. Rich is one of those industry mates who have been unendingly kind and supportive to me over the past year – but, even so, a ticket to the Oliviers and after-party, plus hob-knobbing beforehand at the Ivy Club was beyond the call of friend duty. Thanks, Rich.

Not just on the red carpet, I also found myself on the airwaves – wearing my MyTheatreMates and Also Recognised Awards hat on, with my co-founder Mark Shenton – talking Oliviers predictions and hugging nominees on the Friday before, and on the box – as “theatre blogger” – talking ceremony highlights, surprise results and Gemma Arterton’s plunging neckline (see my #selfie tweet below with the luminous lady herself) with Eamonn Holmes on television’s Sky News.

Here’s my airtime on both, if you want a look or listen…. Until next year!

The Curtain Up Show on Resonance FM