Unexpected Joy Q&A video and photos: How can we find common ground through musical theatre?

Home-Unexpected Joy Q&A video and photos: How can we find common ground through musical theatre?

Unexpected Joy Q&A video and photos: How can we find common ground through musical theatre? 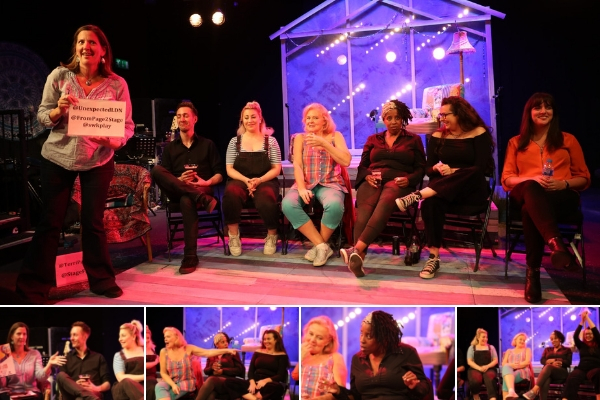 Can musical theatre help us find common ground with those with whom we disagree? If so, Unexpected Joy is undoubtedly the musical to do it.

Set in Provincetown, Cape Cod, Unexpected Joy is the story of three generations of female singers, long-held family tensions and a week together where change is in the air. Joy, a baby boomer pop star, is visited by her daughter Rachel and granddaughter Tamara, who have come from their home in Oklahoma, to attend a commemorative concert in honour of Joy’s life partner, former singing partner and Rachel’s father, Jump, who died a year ago.

But Joy has some other news for Rachel: she’s getting married to someone else. She’s hesitant to tell her, not just because of the memory of Jump, but because the person she’s marrying is a woman, Lou, and she fears – rightly – that Rachel, a born-again Christian married to a prominent televangelist, won’t approve.

Bill Russell and Janet Hood (whose other work includes Elegies for Angels, Punks and Raging Queens) started writing Unexpected Joy long before Donald Trump‘s presidency and before same-sex marriage was legalised across the United States by a 5-4 Supreme Court decision. The latter happened just three years ago and the former means it is quite possible that it may soon be overturned.

All of which brings an added poignancy – and indeed urgency – to Unexpected Joy‘s message of tolerance and acceptance. For me, as someone from a family replete with evangelicals who has now found a home in the London arts community, the clash of two cultures and belief systems was totally believable and incredibly moving. I have struggled to find common ground with my Trump-supporting religious relatives.

Inevitably, we touched on politics, and the timeliness of this musical in today’s divisive society, during the discussion, but we also talked lots about female-led companies and stories on the musical stage (big shout-outs to Six, Sylvia and Wasted), how we can all better support new work, the significance and history of Provincetown, differences in reactions from US and UK audiences, cast meals and what else brings the company joy.

You can view the full Q&A discussion below and via the StageFaves Facebook page.

Unexpected Joy runs from until 29 September 2018 at Southwark Playhouse.