How did Irvine Welsh’s Trainspotting become a cultural phenomenon? I’m finally ready to immerse myself

How did Irvine Welsh’s Trainspotting become a cultural phenomenon? I’m finally ready to immerse myself 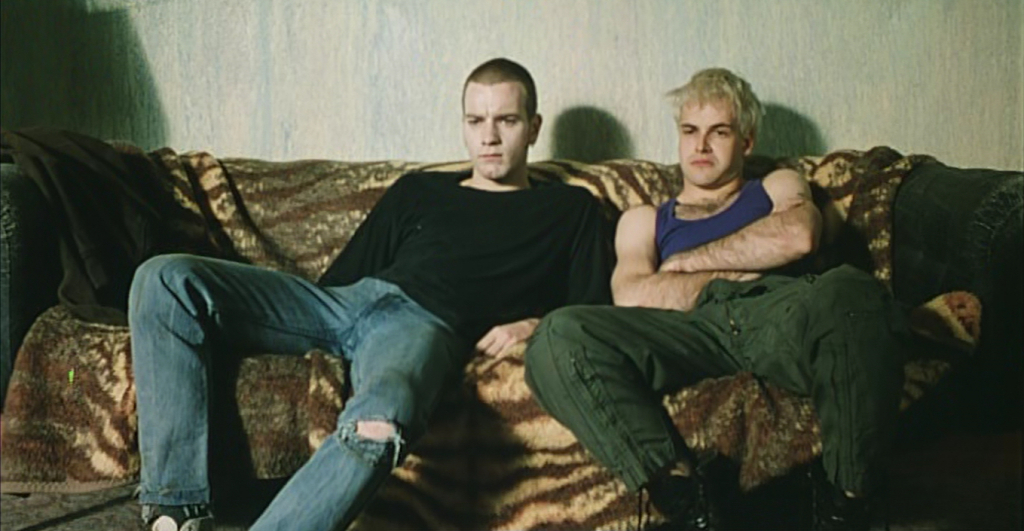 Ewan McGregor & Jonny Lee Miller in the 1996 film of Trainspotting

I’ve always been squeamish about needles. And I’m not much better with graphic drug-taking by any other method either. I first saw Harry Gibson‘s stage adaptation of Irvine Welsh’s Trainspotting in the 1990s when I was a recently-arrived-from-America twenty-something in London. My memory of the experience involves nausea and confusion (I wasn’t able to understand much of what the Scottish actors were saying – I was very fresh off the boat).

About twenty years on, producer James Seabright asked me to write a programme article for Adam Spreadbury-Maher‘s current, immersive staging of Trainspotting Live. This was after it had had two runs at the King’s Head Theatre as well as Edinburgh Fringe and touring success and was just about to play its first season at The Vaults, coinciding with the 20th anniversary of Danny Boyle‘s film and the release of the much-anticipated sequel T2.

“I’ve always been squeamish about needles”

As part of my research for the article, I finally watched Boyle’s seminal 1996 film and, while I’ve got much better at deciphering Scottish accents, the nausea returned with full force. (Never mind the toilet scene, it’s the baby scene… oh my god.) As much as I enjoyed writing about the history and cultural impact of Irvine Welsh’s story of Edinburgh heroin addicts, I couldn’t stomach the thought then of putting myself smack (no pun) into the middle of it. And so, I missed Trainspotting Live‘s 2016/17 run at The Vaults.

Now, as it returns for an extended season ahead of a New York transfer, I promise you: I’m no longer going to be such a pussy. I’ll just be sure not to eat much beforehand, I think. Follow me on Twitter @TerriPaddock to find out how I fare. And in the meantime, below is a version of my programme feature. It’s a good read!

Trainspotting Live runs from 27 March to 3 June 2018 at The Vaults, London. 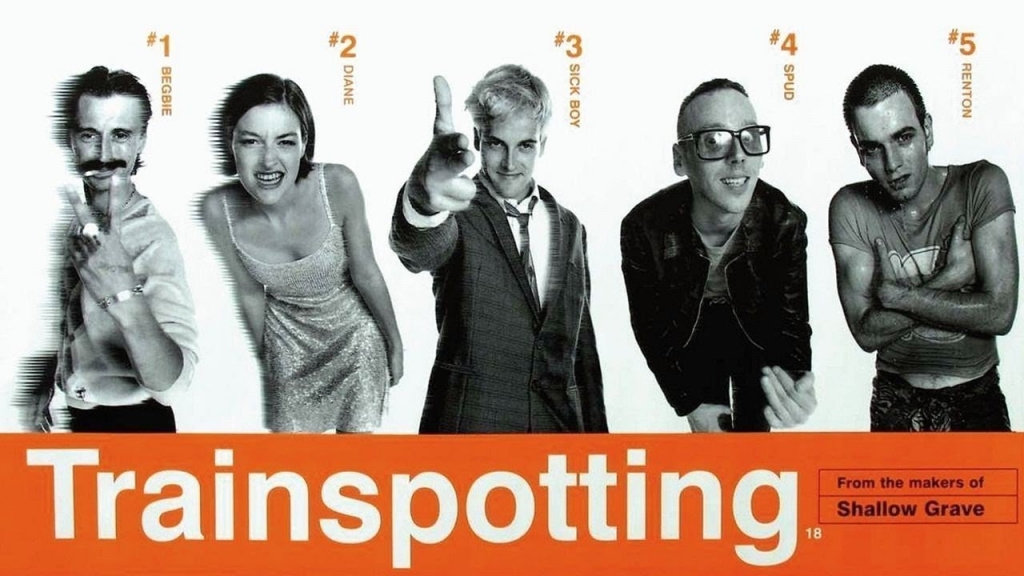 Danny Boyle’s film followed the stage adaptation of the book

“Trainspotting was not only my first novel, it was my first real attempt at writing, so I’m very proud of it,” says Irvine Welsh with what one hopes is false modesty. How could you not be proud of a novel that became a cultural phenomenon continually rediscovered and regularly renewed more than two decades on? Particularly considering initial expectations.

Welsh started writing Trainspotting, while working by day as a civil servant in Edinburgh but drawing on diaries and his own drug-centred experiences as an out-of-work twenty-something in the city the decade before. Parts of Trainspotting were published as short stories in magazines including Rebel Inc and New Writing Scotland. On a recommendation, Welsh pitched these to Robin Robertson, then editorial director of Secker & Warburg, who decided to publish the novel despite believing it wouldn’t sell: the initial print run in 1993 was 3,000 copies.

Although some commentators were shocked by Welsh’s graphic and non-judgmental depiction of heroin addiction – it was long-listed for the 1993 Booker Prize but reportedly dropped from the shortlist by two offended judges – most literary critics lauded Trainspotting.

“The best book ever written by man or woman… Deserves to sell more copies than The Bible,” pronounced the possibly partial Rebel Inc. “The voice of punk, grown up, grown wiser and grown eloquent… Welsh writes with a skill, wit and compassion that amounts to genius. He is the best thing that has happened to British writing for decades,” opined The Sunday Times.

The stage version of Trainspotting – written by Harry Gibson, who would go on to adapt four further Irvine Welsh novels – followed within months of the book’s publication. First mounted as a studio offering at Glasgow Citizens Theatre in 1994, it received a full-scale production at the Traverse Theatre during the 1995 Edinburgh Fringe, and then transferred to London’s Bush Theatre and the West End.

Danny Boyle saw the play, which led to the 1996 film that took Trainspotting to another stratospheric level of cultural phenomenon. Boyle hired John Hodge, his collaborator on 1994 Brit flick Shallow Grave, to adapt Trainspotting for the screen, eschewing the episodic, multiple narrator structure of both the novel and play for the more linear demands of a feature film. (It also omits the reference to the metaphorical title.) 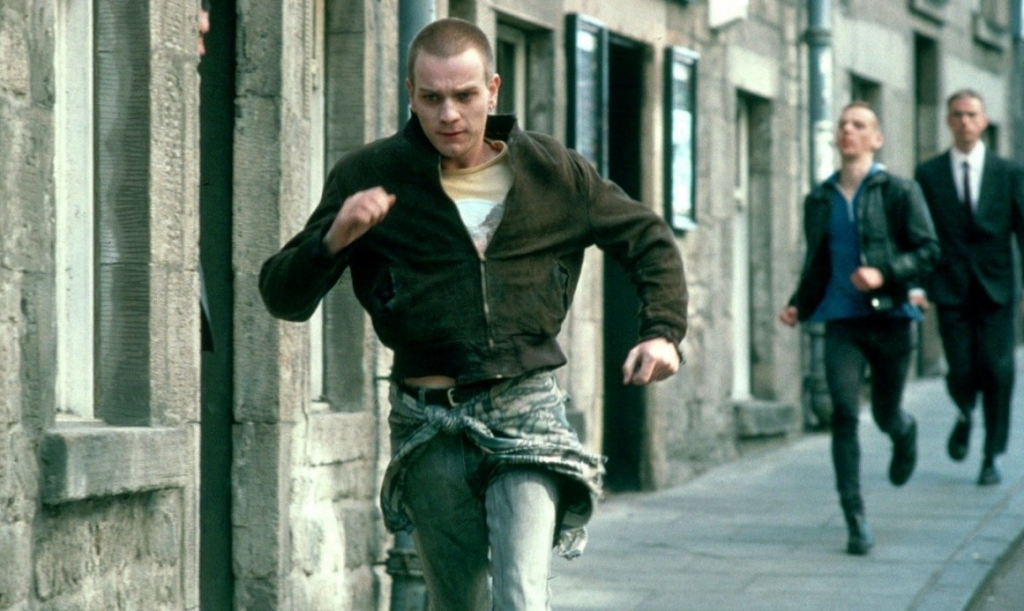 Shallow Grave’s Ewan McGregor was cast as central protagonist Renton, while Ewen Bremner, who originated Renton on stage, swapped into the role of hapless fellow addict Spud. The now-famous film cast also featured Jonny Lee Miller as Sean Connery-obsessed ladies’ man Sick Boy, Robert Carlyle as violent bully Begbie, Kelly McDonald (then an unknown newcomer) as Renton’s teenaged girlfriend Diane and, in the cameo role of drug dealer Mikey Forrester who sells Renton the suppositories that drive him in desperation to “The Worst Toilet in Scotland”, Irvine Welsh himself.

Boyle’s film, shot on a budget of $1.5 million, went on to gross more than $72 million at the global box office and, like the book before it, sparked critical acclaim and controversy in equal measure. During the 1996 US presidential campaign, Republican nominee Bob Dole condemned the film for its perceived “moral depravity” and glorification of drugs.

In whichever form they appear, the characters’ exploits seem to feed the phenomenon that is Trainspotting. The first novel has, to date, sold more than one million copies in the UK alone and been translated into 30 languages. The play won The Sunday Times Award for Best New Play, was named one of the Top Scottish Theatre Events of All Time by The Scotsman, and continues to be performed around the world in different versions (including a 2012 American makeover, which relocated the addicts from Edinburgh to Kansas City). 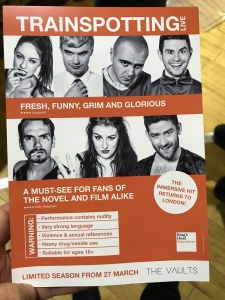 Trainspotting Live is back for a second fix at The Vaults

The movie was the highest-growing British film of 1996, and was ranked tenth in the British Film Institute’s list of Top 100 British films of all time. Amongst its many accolades, it was nominated for an Oscar and three BAFTAs, and it garnered Ewan McGregor numerous Best Actor prizes, catapulting him into the major league of British screen stars.

In addition to sequels and reprints, DVDs, soundtracks, streaming and new stage interpretations, like this return of In Your Face Theatre’s immersive production, keep Trainspotting very much alive to new generations of audiences.

Trainspotting Live runs from 27 March to 3 June 2018 at The Vaults, Leake Street, London SE1 7NN. Performances (75 minutes) run Tuesdays to Sundays at 7pm, plus Thursdays to Saturdays at 8.45pm and late night at 10.3pm on Fridays and Saturdays. Tickets are priced £20 to £35. CLICK HERE TO PURCHASE!