Toxic treatment: 7 horror films that should be musicals

Home-Toxic treatment: 7 horror films that should be musicals

Toxic treatment: 7 horror films that should be musicals 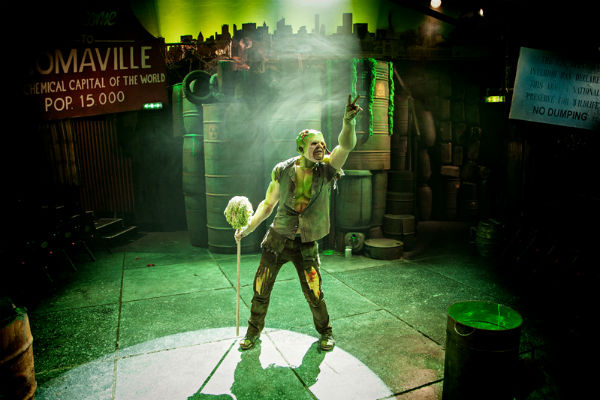 I’m not a great one for horror films: I scare way too easily. Even Shaun of the Dead gave me nightmares, and no, I’m not kidding about that.

I’ve never seen any of the original Troma cult classic screen incarnations of The Toxic Avenger, which launched in 1984, but I’m happy to report that the musical version, now receiving its European premiere at London’s Southwark Playhouse, served only to amuse rather than terrify me. 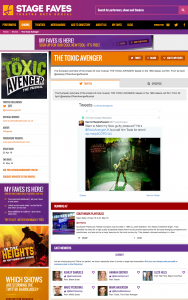 Find all social feeds for The Toxic Avenger and its cast on www.stagefaves.com

It got me and my partner Peter thinking about which other horror films might make good stage musical spoofs. Peter suggested the likes of Salem’s Lot, The Omen and The Shining, but for the purposes of this list, and my scaredy-cat constitution, those are too frightening.

A few others we thought of are already in the works – including Heathers (1988), Beetlejuice (also 1988 – a vintage year) and, via an Italian producer (not entirely clear whether they actually had the rights), Ghostbusters (1984, and just remade with female fighters).

Which other films do you think should be on the list?

And by the way in case you haven’t seen it yet, The Toxic Avenger tells the story of aspiring earth scientist Melvin Ferd the Third, a nerd, who, after confronting the corrupt mayor of his New Jersey town, is thrown into a barrel of toxic waste. He emerges as a seven-foot, green-skinned mutant and sets out to save the town, win the girl and end global warming. Limbs and heads are severed in the process. The musical has a book by Joe DiPietro and music by David Bryan (who also collaborated on Memphis). The UK premiere is directed by Benji Sperring.

The Toxic Avenger continues at Southwark Playhouse until 21 May 2016.

A boy inadvertently breaks three important rules concerning his exotic new mogwai pet: no bright light, don’t get him wet, and never ever feed him after midnight, no matter how much he begs. The result? A horde of malevolently mischievous monsters terrorise a small American town.

“Sleep all day. Party all night. Never grow old. Never die. It’s fun to be a vampire.” A single mother and her two sons move from Arizona to a coastal town in California, where sexy bikers rule the promenade and there are a lot of mysterious deaths. The title is a reference to Peter Pan. Kiefer Sutherland is the peroxided vampire-in-chief.

“Eight legs. Two fangs. And an attitude.” Dr Ross Jennings (Jeff Daniels), has a pathological fear of spiders. When he moves his family to a small town (always a small town!), the thing that bugs him most is now harming the townspeople at an alarming rate. For this unlikely hero, overcoming a childhood phobia might just save the community.

Kathleen Turner is Beverly R Sutphin, a sweet mother of a picture perfect middle class family. But starting with a neighbour who starts receiving obscene phone calls, Beverly stars to take slights to her family rather too personally, and gruesomely. The body count mounts as the police get closer to the truth. is shocked when they find out that one of their neighbours is receiving obscene phone calls. John Waters directs. Ricki Lake and, making his screen debut, Matthew Lillard play Turner’s children.

What are the “rules” of horror films? Sidney and her friends debate as a serial killer known as Ghostface starts murdering teenagers. Which of her friends will survive? Which of her friends are involved? Director Wes Craven spawned many sequels to this original and made a star of his reluctant heroine Neve Campbell. The cast also included Matthew Lillard (again!), David Arquette, Courtney Cox, Skeet Ulrich and Drew Barrymore (though she gets, ahem, cut early on).

The plucky Brits show how to make flesh-eating fun. Co-written by Simon Pegg and Edgar Wright, Shaun of the Dead is directed by Wright and stars Pegg as the titular Shaun, who decides to turn his ho-hum life around by winning back his ex-girlfriend and reconciling with his mum – while also dealing with an entire English community that’s turned into zombies. Many homegrown cameos including Penelope Wilton, Martin Freeman, Reece Shearsmith, Tamsin Greig, Rafe Spall, Bill Nighy and Matt Lucas.

Not scared of spiders, maybe slithering snakes then? Samuel L Jackson is an FBI agent escorting a mob witness onto a plane headed for Los Angeles. But the mob have other plans: assassinate the witness but releasing a crate of 450 deadly and venomous snakes onto the same plane.