The Lesson: If knowledge is power, does ignorance kill?

Home-The Lesson: If knowledge is power, does ignorance kill?

The Lesson: If knowledge is power, does ignorance kill? 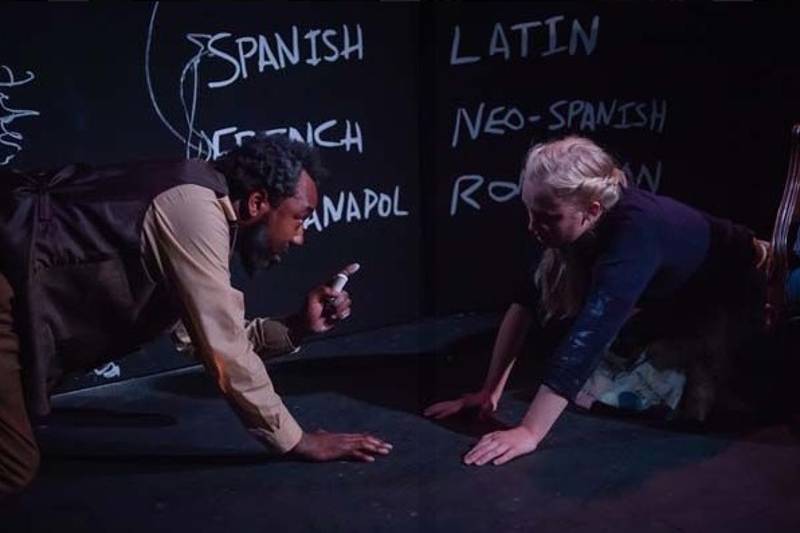 The Lesson at Southwark Playhouse

How do you cope in a world gone mad? That seems to me to be the central question in two of Romanian-French playwright Eugene Ionesco’s one-act plays, The Lesson and The Chairs, written in the aftermath of the Second World War, in 1951 and 1952 respectively.

Having earlier this year enjoyed the Almeida’s revival of the latter, starring husband and wife Marcello Magni and Kathryn Hunter, I was very pleased this month to catch Icarus Theatre’s acclaimed revival of the former.

In both absurdist tragic farces, the tyranny of the times terrorises increasingly frenzied characters. And for both the coping mechanism is violent: one ending in suicide, the other in murder.

In Icarus’ excellent production of three-hander The Lesson, language is both a weapon and a fourth character, swirling menacingly around the stage – in the most inventive use of projection and captioning I’ve seen – as pupil and professor grapple with an array of truths and untruths.

Who has the real knowledge here? Who has the power? A niggling toothache provides an early warning. If we ignore the dull ache of discomfort too long, it may consume us.

The Lesson stars Jerome Ngonadi as the Jekyll & Hyde professor, Hazel Caulfield as his doomed student, and Julie Stark as his sinister maid. Max Lewendel directs.

The Lesson runs at London’s Southwark Playhouse until 23 July 2022.