The horrors of Headlong’s 1984 strike close to home

The horrors of Headlong’s 1984 strike close to home 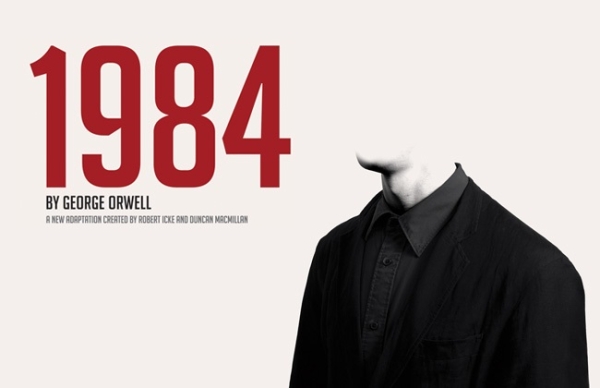 I came home from the opening night of Headlong’s 1984 at the Almeida Theatre in a foul mood. It’s a brilliant production and a slick adaptation by Robert Icke (@robertwicke) and Duncan Macmillan (@SleeveNotes) – though slightly over-reliant on the gimmick of performing key scenes backstage and then projecting them onto Orwell’s ever-present telescreens, hung ominously from above – and I’d definitely rate it as a Top Pick for those wanting serious, and seriously haunting, drama.

But it should also carry a warning. If you’re already feeling even slightly paranoid, hounded or helpless, this may tip you over the edge – or, at the least, add to your cache of nightmares.

It was the scenes in the Ministry of Truth, where Winston rewrote history – separating people from their careers, reputations and lives with such ease – that struck closest to home for me. I have come to understand rather too well of late the sense of being “deleted, annihilated, unpersoned”.

The line that drew titters – or should that be Twitters – of recognition amongst the rest of the audience, however, was this one: “The people will not revolt. They will not look up from their screens long enough to notice what’s happening.” 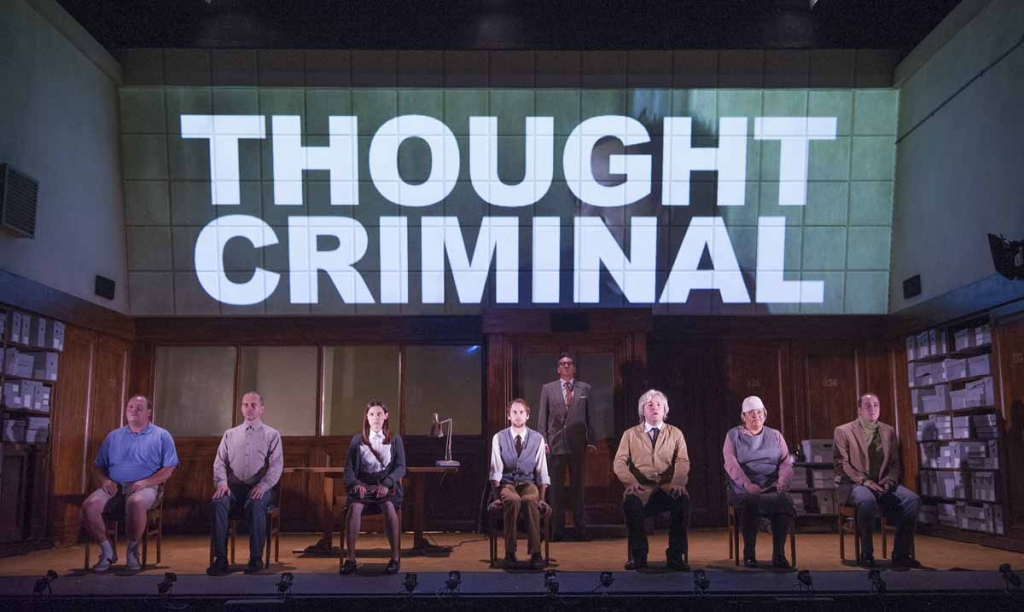 If Icke and Macmillan’s framing use of a book group, constantly interrupted by dings and rings, didn’t make the point strongly enough, and if we then failed to recognise our own contrition by diving into our pockets and bags for our own smartphones as soon as the house lights went up, there could be no avoiding the resonance when flicking through the programme.

In one programme note, entitled “The Consent of the Surveilled”, Dr Paolo Gerbaudo, a lecturer in Digital Culture and Society at King’s College London, examines the “pact with the devil” that we have all struck with today’s monolithic digital corporations: “We have accepted the practice of giving away our personal data in exchange for free services, fully knowing (unless we were completely naïve) that these services would use our data to make money” … and worse by other “parasitical receivers”.

“Are We Living in Orwell’s Imagined Future?”, asks another programme note, and then collates quotes from a variety of pundits that add up to a near-unanimous YES vote. As I’m such a sucker for quotes, I’ll let these ones speak for themselves.

“A child born today will grow up with no conception of privacy at all. They’ll never know what it means to have a private moment to themselves, an unrecorded, unanalysed thought” – Edward Snowden, 25 December 2013

“The technological possibilities of surveillance and data collection and storage surely surpass what Orwell imagined… Snowden describes: ‘The NSA, specifically, targets the communications of everyone. It ingests them by default.’ That seems life a safe operating assumption about emails, texts or telephone calls… Regardless of the actual scope of the government’s snooping programmes, the notion of digital privacy must now, finally and forever, seem a mostly quaint one” – Ian Crouch, The New Yorker, 11 June 2013

“In 21 years of invading people’s privacy, I’ve never actually come across anyone who’s been doing any good. Privacy is the space bad people need to do bad things in. Privacy is evil; it brings out the worst qualities in people. Privacy is for paedos; fundamentally nobody else needs it” – Paul McMullan, former News of the World deputy features editor, 29 November 2011

“Orwell’s world was mostly filled with propaganda and war statistics. In my cable package, I have at least five different all-news, 24-hours-a-day networks. We are the first generation in history to have the constant flow of information hitting us in a never-ending stream” – Hal Rappaport, Dvice, 28 June 2012

“In many respects, Orwell is ubiquitous and more relevant than ever. His once-visionary keywords have grotesque afterlives: Big Brother is a TV franchise to make celebrities of nobodies and Room 101 a light-entertainment show on BBC2 currently hosted by Frank Skinner for celebrities to witter about stuff that gets their goat” – Stuart Jeffries, The Guardian, 24 January 2013

“In 1984, nearly all public and private places have large TV screens that broadcast government propaganda, news and approved entertainment. But they are also two-way monitors that spy on citizens’ private lives. Today websites like Facebrook track our likes and dislikes, and governments and private individuals hack into our computers and find out what they want to know. Then there are the ever-present surveillance cameras that spy on the average person as they go about their daily routine” – Lewis Beale, CNN, 3 August 2013

“We have our own variations of ‘newspeak’ that limit what we thing by limiting what we say. ‘Politically correct’ language is speech that hedges thought. Technological autocorrect and autocomplete functions often dictate our phraseology. Emails and tweets promote stilted communication. And let us not forget text talk, which AFAICT, is now helping anything. WYSIWYG. As a language deteriorates, the grand and noble ideas it is capable of expressing are in danger of deteriorating also.” – Sean Fitzpatrick, Crisis Magazine, 15 August 2013

The last echoed another Orwell line from the play that clutched at my heart and gut: “It’s a beautiful thing, the destruction of words,” opines one (later unpersoned) character when explaining the high-functioning nature of Newspeak. What a terrifying utterance.

By the way, I had to look up AFAICT. In case you didn’t know, it stands for “As Far As I Can Tell”.