The birth of an Icon: I was there

Home-The birth of an Icon: I was there

The birth of an Icon: I was there

Obviously I go to the theatre a lot: but last night truly was special. I had the huge privilege of attending a premiere, at the White Bear Theatre, that marked the playwriting debut of a dear friend, whose scripts I’ve had the honour of reading over many years.

That’s not to suggest that said friend, Dave Cantor, is a perennial wannabe. He’s had tremendous success in television, not least as a staff writer for three of the BBC’s most successful sitcoms: My Family, Two Pints of Lager and a Packet of Crisps and The Green Green Grass. But in the decade or so that we’ve been close, Dave has also held an ambition to write for the stage. An ambition that I always loudly encouraged. 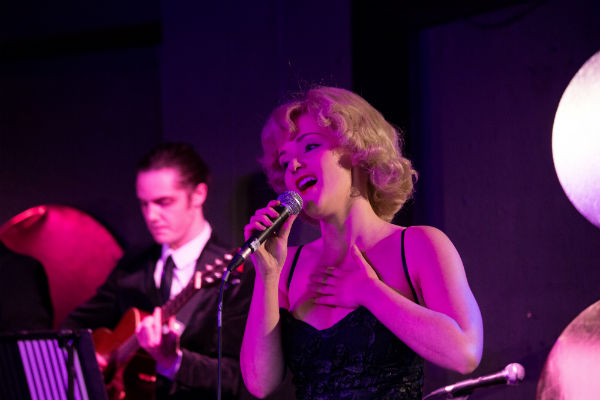 Last night marked the start of what I’m sure will be a long affair with the stage for Dave. His new one-act piece, I Play for Me, was commissioned by producer David Donegan as a companion piece to another short new play, Tom O’Brien‘s Kathy Kirby: Icon. The latter tracks the real-life story of the 1960s British singing star, a contemporary of Dusty Springfield, Lulu and Cilla Black who slipped more quickly and cruelly into obscurity. 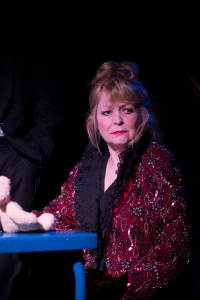 Tina Jones is defiant but broken as old Kathy

It’s a tremendous performance. I was also impressed by the belting singing voice of Maggie Lynne as young Kathy Kirby and the incredible vulnerability and pathos captured by Tina Jones as old Kathy Kirby, whose grasp on reality became more tenuous as she withdrew into reclusiveness, before passing away in 2011.

Also in the cast of this double bill of plays with music: Lloyd Morris, Harry McLeod, Jeremy Gagan, Abi O’Keiffe and Michael Scott Wiseman. Thanks to all of them – and the inimitable piano entertainer Bobby Crush (a.k.a our own British Liberace), who worked with Kathy Kirby before her retirement and was one of the show’s first night guests. A charming man.

Kathy Kirby: Icon and I Play for Me continue at London’s White Bear Theatre, Kennington, until 8 November 2015.