Home-Tanya Moodie on Trump: ‘We need to keep marching together, every day’ 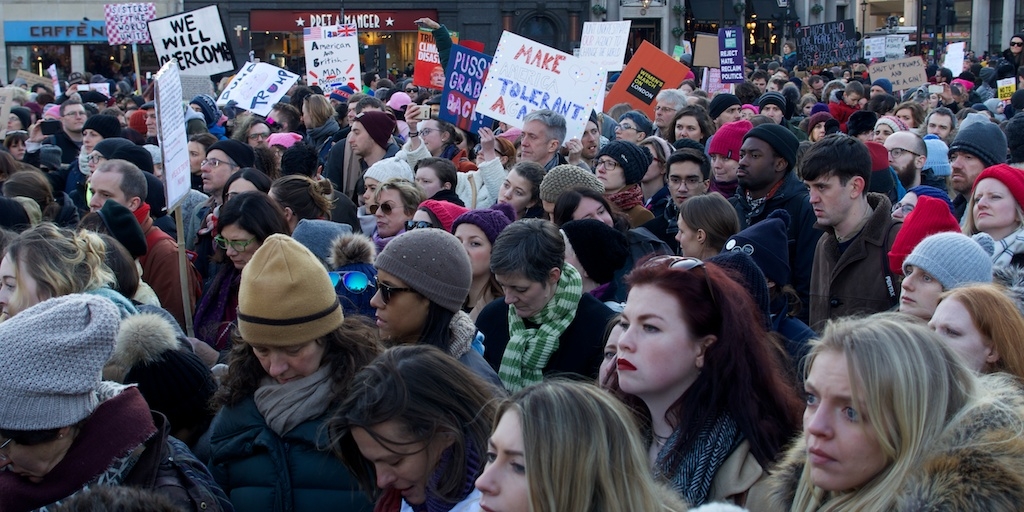 This week the president of the United States Donald Trump said (or rather tweeted) that those who participated in protests against his administration fell into one of three categories: “professional anarchists, thugs or paid protestors”.

His White House Secretary Sean Spicer reiterated the last in a television interview, insisting that protestors are definitely paid, that protest has indeed become a “profession” (to which, I asked whether I should send him an invoice as I hadn’t yet received any money in my account).

Rather than pick apart these two latest, egregious lies (so many lies, so many lies), in response to this, I’d rather just share something I’ve been meaning to share for the past fortnight: some inspiration from the Women’s March London which I took part in (free of charge) along with an estimated 100,000 others on Saturday 21 January, the day after Trump’s inauguration. 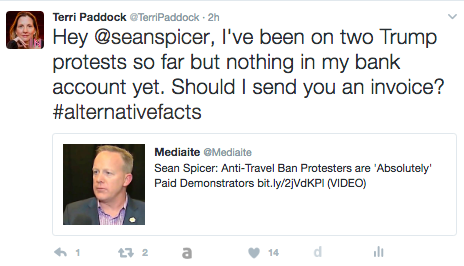 As someone who makes a living championing theatre, one of the things that really delights me about the grass-roots activism sprouting up all around me in our increasingly illiberal age of Trump and Brexit is how much of it is being driven by theatre colleagues.

Amongst some of the London organisers of the Women’s March were the playwright Rebecca Lenkiewicz and, on the day in Trafalgar Square, in addition to politicians I admire like Yvette Cooper and TV presenter/compere Sandi Toksvig (also a playwright herself), I screamed myself hoarse when the actress Tanya Moodie took the stage.

And so, having been blown away by galvanising oratory from Tanya in less than a year – see also her opening remarks at last year’s Susan Smith Blackburn Prize – I am delighted to have been given permission to share Tanya’s Women’s March speech in full with you.

Here is the full text of Tanya’s speech, written by Tanya, Hannah Peaker and Sophie Walker of the Women’s Equality Party:

“I am so honoured to march with you today.

“Today, you have rejected the rhetoric of division, and hate, and the rise of xenophobia in this country and around the world. Racism and sexism threaten to roll back hard-won freedoms and halt progress in areas where there is still so much to do.

“Today, in all our diversity, from all over the country, we have marched as one community to reclaim our democracy and bring the interests of all women into the political space.

“Today we understand that though diverse, we are inextricably bound. And unless tomorrow is shaped by the voices of all women – including BAME women, migrant women, disabled women, working class women and LGBTQ+ women – everyone will be poorer for it.

“Today we experience our diversity as power.
And we have the power to build politics that sees all of us.

“Because today we experienced that it is better for 100 people to advance a single step together than for one single person to advance 100 steps and leave others behind.

“We need to keep marching together, every day, creating a more equal and inclusive society, step by step.

“My name is Tanya Moodie. I am an artist, a teacher, a feminist and a founding member of the Women’s Equality Party. I marched today because I believe that ending violence against women and girls isn’t radical – it’s common sense.

“I believe my body is not up for grabs and that having control over my reproductive rights isn’t radical – it’s a basic human right.

“And I believe that equal workplace rights, affordable childcare and equal parenting are not radical – but the cornerstone of a democracy that gives everyone equal opportunities.

“I marched today because I am obstinate. I want to build a political movement that will give me all of those things. And I am damned if any movement for women’s equality is going to start without me…

“And tomorrow?
Keep the swing in your waist.
Keep the joy in your feet.
Keep your face above the parapet.

“Join the Women’s Equality Party, because
WE have begun what cannot be undone. Equality is better for everyone
(See you at Million Women Rise on 11 March!)”

Photos from the day

It wasn’t only women who took part in the Women’s March – as you can see from these photos, which were taken by my other half, Peter Jones (who also happens to be a man!).

And, meanwhile, in DC

And from the main Women’s March in DC on the same day, there was this. A song that I can’t – and don’t to – get out of my head. I can’t keep quiet. Can you?

This is beautiful. Will they record & release? Let’s make it No.1 #icantkeepquiet #womensmarch https://t.co/H9jbF8pWHw

These women never met till today and practiced this song online. Show them some love. #Icantkeepquiet #WomensMarch #WomensMarchOnWashington pic.twitter.com/rPA4dDTIYz