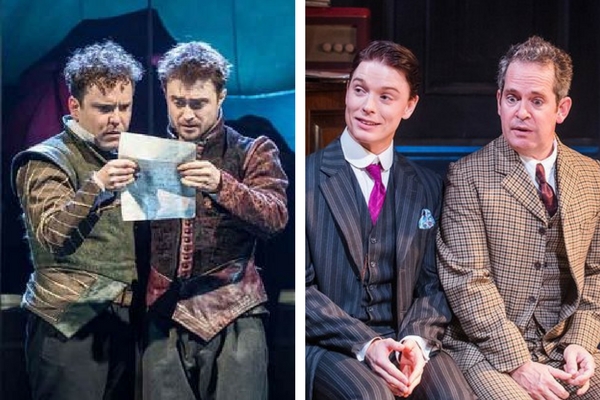 I’m pleased that the Old Vic has added a week to the run of its 50th anniversary production of Tom Stoppard‘s Rosencrantz and Guildenstern Are Dead, now booking until 6 May – it gives me another chance to tell you to go see it.

There’s a special thrill seeing Stoppard’s breakthrough play back on the same stage where it first premiered five decades ago. And David Leveaux‘s fine production – with Daniel Radcliffe and Joshua McGuire as the two minor characters from Shakespeare’s Hamlet who now take starring roles in their own confused story – shoulders the weight of that history well.

Something that kept occurring to me as I watched – and provided regular asides to my partner Peter, who had never seen either play before – was: has anyone ever staged Rosencrantz and Guildenstern in rep with Hamlet? 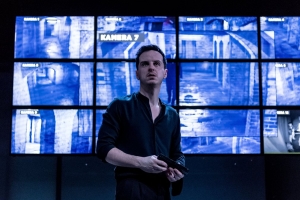 I haven’t yet seen London’s current Great Dane offering, Robert Icke‘s production of Hamlet starring Andrew Scott at the Almeida Theatre (and, just announced today, transferring to the West End’s Harold Pinter Theatre in June). It opened shortly before Stoppard’s spin-off and several critics commented on the extra satisfaction that this provided.

But what I want to see is not just the plays in quick succession. I’d like to see them staged under a single directorial vision and, crucially, with the same actors playing the same characters in each. Let’s see in full how McGuire and Radcliffe move from starring roles in R&G to cameos in Hamlet, and vice versa for the actors who play Hamlet, Gertrude, Claudius, Polonius and Ophelia.

If not Hamlet, it also occurs to me that Rosencrantz and Guildenstern could be well coupled with London’s other current Stoppard revival, Patrick Marber‘s production of Travesties, which is now running at the West End’s Apollo Theatre after a sell-out season last year at the Menier Chocolate Factory. 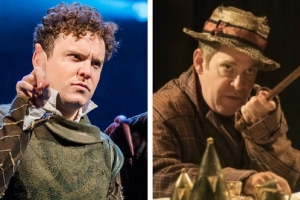 Originally premiered eight years after R&G, in 1974, Travesties, like its predecessor, is a kind of love letter to theatre – the play-within-a-play here being Oscar Wilde‘s The Importance of Being Earnest rather than Shakespeare. And there are other thematic resonances, including the elevation of a relatively minor player alongside well-known ‘characters’ (in this case, all historical figures: a British diplomat versus towering figures of the twentieth century including Lenin and James Joyce) and Stoppard’s trademark intellectual rigour and game-playing.

Again, I’d love to see a single company tackling both plays under a shared directorial vision. What extra insights might that bring? Whatever, it’d be lots of fun to see a cast of talented actors simultaneously two mega-works by one of our greatest living playwrights.

That said, seeing these two separately cast productions did make me think: Joshua McGuire (who plays Guildenstern) could easily pass for the son of Tom Hollander (who stars as diplomat Henry Carr in Travesties). Both have long been amongst my favourite actors of their respective generations, but seeing Hollander back onstage (he doesn’t tread the boards anywhere near often enough for my liking) in close proximity to McGuire makes their similarities – both physically and in terms of the quick wit and slightly neurotic intensity they bring to their performances. They’ve both got acting brilliance in their genes. 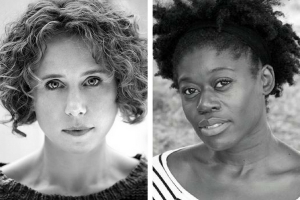 Okay, so two more asks. One, please could some savvy producer cast Hollander and McGuire in something together? They don’t even have to play father and son or be related in any way, just sharing a stage. Two, thinking specifically of Rosencrantz and Guildenstern Are Dead, as much as I enjoyed the pairing of McGuire and Radcliffe and indeed the pairing of former History Boys Jamie Parker and Samuel Barnett in the play’s last London outing (Trevor Nunn‘s Chichester Festival production at the Haymarket in 2011), surely it’s time to cast non-white male actors in these two gift roles?

Here’s my fantasy casting starter for ten for the next revival of R&G: Akiya Henry and Michelle Terry. Any other suggestions? Either for those roles or the cross-cast productions of Hamlet and/or Travesties we’ll run alongside them? And who should direct?

Rosencrantz and Guildenstern Are Dead is now booking at the Old Vic Theatre until 6 May 2017.

Travesties continues at the Apollo Theatre until 29 April 2017.

Hamlet finishes at the Almeida Theatre on 15 April and then transfers to the West End’s Harold Pinter Theatre from 9 June to 2 September 2017.