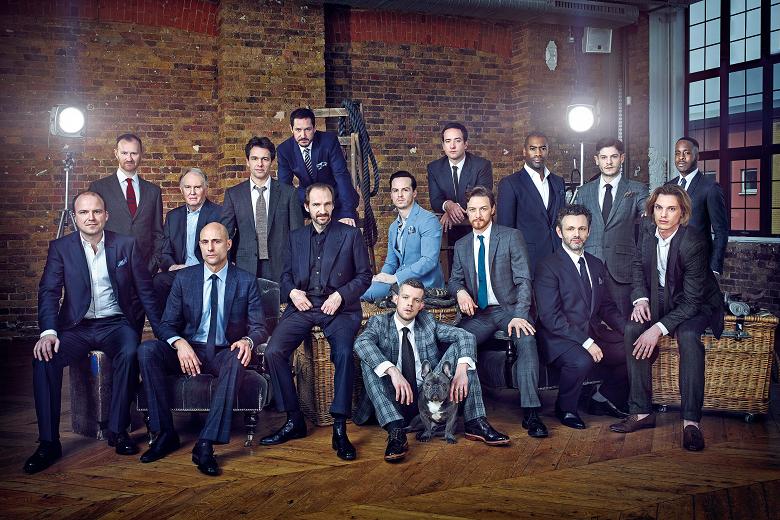 The “Drama Kings” photoshoot for The Times. © Robert Wilson

As a way of raising the glamour stakes ahead of this Sunday’s Laurence Olivier Awards, last Saturday’s Times Magazine‘s cover story was a five-star effort.

For the piece, three out of four of this year’s Best Actor nominees – James McAvoy, Mark Strong (for The Ruling Class and A View From the Bridge, both of which finish their West End runs this Saturday) and Tim Pigott-Smith (King Charles III) gathered in an industrial studio in north London to take their pick of a wardrobe of stunningly suave suits and pose for photographer Robert Wilson.

Meanwhile, reporter Ben Machell was on hand to capture the atmosphere and quiz the actors on their craft. In addition to McAvoy, Strong and Pigott-Smith (where oh where was The Crucible‘s Richard Armitage to complete the 2015 Best Actor field?), this creme de la creme of top male acting talent included Best Supporting Role in a Musical nominee Rolan Bell (Memphis), former Olivier winners and nominees Bertie Carvel, Rory Kinnear, Andrew Scott, Michael Sheen and other stage heavyweights Ralph Fiennes (now in Man and Superman), Julian Ovenden (My Night With Reg), Mark Gatiss (The Vote), Matthew Macfadyen (Jeeves and Wooster), Nicholas Pinnock (The Royale), Russell Tovey (The Pass) and Jamie Campbell Bower (soon to make his musical debut in Bend It Like Beckham).

From @thetimes piece. What’s the collective noun for actors? @russelltovey: ‘A whinge’ @Markgatiss: ‘A resting. An ambition. No, a thrust!’

With one notable exception (read the original piece to find out who that was!), all of these men come across as, not only hugely talented, intelligent, and surprisingly modest, but also just really nice guys – as well as good friends. Here are some of my favourite quotes from the day on the craft of acting.

On being friends not arseholes

“Actors tend to be quite good at getting on with people. If you’re an arsehole, people don’t want to work with you. You won’t get hired … Well, there are a few arseholes.” – Bertie Carvel

“If you’ve spent six months doing the same theatre production night after night, and trying not to go insane, then that does bond you.” – Michael Sheen

“We like to sit around and have a bitch and a whine about things… Yeah! Actors like to sit down and have a good moan. But that’s because we’re dramatic.” – Russell Tovey

On competition and appreciating good fortune

“It’s a complicated dynamic, a really odd balance. Because you form these very, very tight relationships with people. They’re your pals, but then you’re also competing with them for work. There are a lot of us chasing a few jobs.” – Mark Strong

“[In this room] We’re in that rare percentage of guys who can turn down work and feel secure that something else will come along. I still s*** myself whenever I turn down a job because I’ve got so many actor mates who aren’t working at all. But I’m so lucky. I’ve bought a place. I’m paying a mortgage. I can go out and buy a pair of shoes and not worry about it.” – Russell Tovey

“To be honest, I think I perform for my peers first and foremost. I don’t mean to belittle the audience, but it’s the other actors’ evaluation of my performance that I’m most interested in. We’re doing it for each other. We’re always trying to outdo each other, always trying to impress each other.” – Mark Strong

“At the end of the day I love pretending to be someone else… I mean, in what other job can you scream and cry and then, at the end, have someone pat you on the back and say, ‘Well done’? I do it because I need it. I think we all do… Psychoanalyse that.” – Russell Tovey

On theatre vs television

“I felt like I was doing a proper job. I know that sounds ridiculous. But I sort of felt nicely anonymous. You go in, you do your job, then go home. You’re not babied as much as you are in the TV business. You run into lots of people you’ve done jobs with in the past… I adore it.” – Nicholas Pinnock

“I think it’s your job as a leading man to be first in, last out. To work as hard as you possibly can. To identify the actor who is working hardest, and then work harder than them. Just to set the tone.”

“The source of theatre is human sacrifice. The first time we killed someone in front of a crowd to make the gods like us better, that’s where we got our theatre. And I think there’s still an element of that, when it’s frightening and electric, and you’re watching actors who are giving themselves in such a committed way that they are almost sweating blood. And that’s what I always try to do.”

“I’d rather people went out twice a year to see a really good, dangerous piece of theatre in which they were genuinely concerned for the actor on stage, rather than just going to see loads of dead-easy bourgeois f***ing pieces of s***, the dead-easy stuff that gets put on just to sell out quickly… If you watch a bad film, you kind of just forget about it. It’s not such a headache. But a bad play? When I watch bad theatre, I feel like I’ve been hurt. I feel like someone has really annoyed me. Badly.” – James McAvoy

What would Olivier have thought? 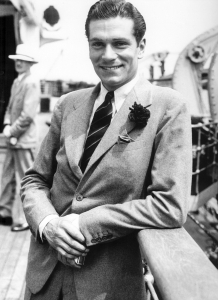 Laurence Olivier knew how to do suave

Seeing these actors at the top of their game – and lavishly suited (most expensive I spotted was Jamie Campbell Bower’s Tom Ford two-piece, with its £2,650 pricetag), booted and expertly styled – I could just imagine Laurence Olivier swanning in, with his perfect poise, and looking totally in place. In fact, is it my imagine, or is Iwan Rheon (back row, second from the right in the group photo) channelling a bit of a young Olivier with his look these days?

However, I’m not so sure that Olivier would have felt so comfortable with some of the industry changes since his heyday. As Tim Pigott-Smith noted: “The profession is radically different today. All those old-fashioned images of the old actor laddie in a fedora with a trace of eye make-up have gone. When I started, it was much more hierarchical. Older actors were afforded a great deal more respect. But since then there’s been a democratisation that is very healthy.” –

Well, I still have shedloads of respect for Pigott-Smith and others of his generation. But thank goodness for the younger generations too. We have an embarrassment of riches on our stages, as this feature so gorgeously illustrates.

Best of luck to McAvoy, Strong, Pigott-Smith, Bell and all of this year’s other Olivier nominees. You do Larry proud. I genuinely wish you could all win. And final question if any of them are reading: did you get to keep the suits?!

The 2015 Laurence Olivier Awards takes place this Sunday 12 April at London’s Royal Opera House. Highlights from the awards ceremony will be broadcast on ITV at 10.15pm on Sunday. For more information, visit www.olivierawards.com.

Striking a pose for The Times

Theatrical tantrums or male bonding – what happened when Britain’s leading men got together for our photoshoot? What’s the collective noun for a roomful of actors? “A whinge?” Ben Machell reports…