Simon Callow reaches 21 with The Man Jesus. What next?

Home-Simon Callow reaches 21 with The Man Jesus. What next?

Simon Callow reaches 21 with The Man Jesus. What next? 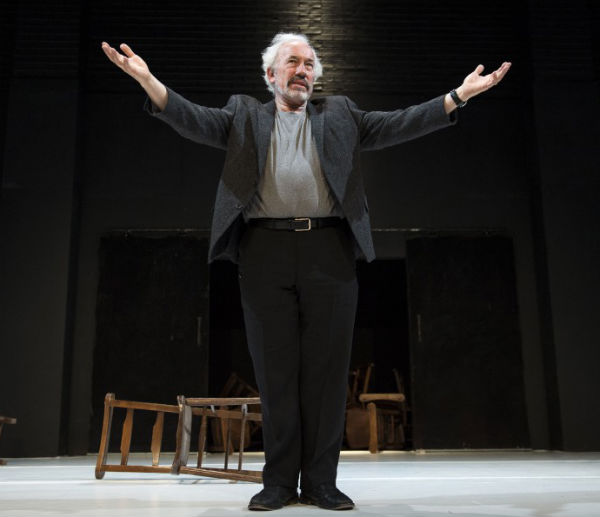 After catching Simon Callow’s latest barn-storming performance in The Man Jesus, which stopped off last night (6 October 2014) at the West End’s Lyric Theatre as part of a national tour, I had a lightbulb moment.

Similar to what Colin Watkeys is doing with his annual Face to Face Festival of Solo Theatre, which opened last night at Wandsworth’s Lost Theatre and continues until Saturday, Simon could mount his own solo festival…solo.

By his own count, The Man Jesus is Simon Callow’s 21st one-man show. In the past ten years or so, he’s been churning them out apace: The Mystery of Charles Dickens, Being Shakespeare (originally titled The Man from Stratford) and A Christmas Carol have all touched down in the West End, the first in 2002 and then revived again in 2012.

There’s also been The Importance of Being Oscar (Wilde, that is), There Reigns Love (Shakespeare’s sonnets), Dr Marigold and Mr Chops (two one-acts on Charles Dickens characters, presented as a double bill) and, launched at this year’s Edinburgh Fringe and just seen at the St James Theatre, Juvenalia.

Also in 2012, Simon went a step further from simply performing solo pieces, and decided to write one as well, Inside Wagner’s Head, which he premiered at the Royal Opera House’s Linbury Studio.

So, come on then, producers, book the Duchess Theatre, or somewhere else nice and central and intimate, and mount “Simon Callow Goes Solo”, all 21 of his one-man plays running in rep for a month… or maybe more.

At The Man Jesus after-party, I suggested my idea to the man himself. “I’ve been wanting to do that for years!” he agreed. And how about, at the centre of it, a “monodrama marathon”, in which he delivers all 21 back-to-back without stopping?! Just imagine the PR…. “Yes!” he says, without hesitation.

As his bio in the programme notes, with lashes of understatement, Simon is “never known for his lack of energy”.

By the way, unlike his previous offerings on Dickens, Wilde and Shakespeare, The Man Jesus is not a “Being Jesus” or “Being the Messiah”. In the play, written about Matthew Hurt, Simon plays a variety of characters, from mother Mary to Judas, Herod and Pontius Pilate, who give their perspective on Jesus.

It’s a respectful and thought-provoking evening of contemplation on the nature of faith and followers.

The solo faces of Simon