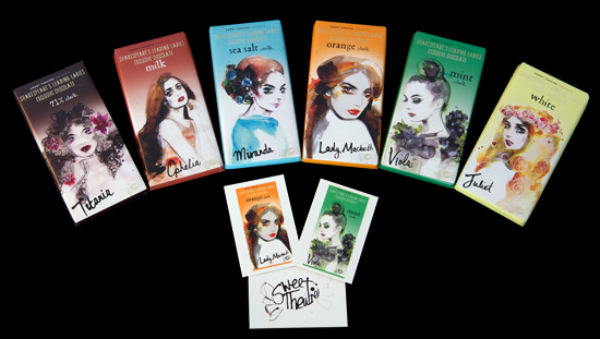 Any chance of dieting this month went out the window with the arrival of this beautiful care package of Sweet Theatre’s Shakespeare’s Leading Ladies chocolate bars.

Sweet Theatre is the brainchild of Sally Humphreys, a theatre producer and keen confectioner. For many years, Sally has been the cupcake maker of choice for West End openings and theatrical birthdays (in my previous guise, Sally whipped up a tantalizing tower of cakes for me for the tenth birthday of the WhatsOnStage Awards).

“Sweet Theatre is an extension of that hobby,” she tells me. In recent months, she’s been travelling a lot with her husband, Rolling Stone Ronnie Wood (they married in 2012), and was missing being able to bake as much. “I spent a lot of time in hotels talking to patisserie chefs,” she says.

Then, this past March, she woke up with the idea of chocolate, which, unlike cakes, could be made and packaged in batches and easily passed on as gifts. So why theatre? “It had to be connected with theatre, because that’s what I love!” Sally explains, and Shakespeare “because everyone has a connection” with the bard, and Leading Ladies because “well, I’m a lady and I relate to them more”.

Sally also believes that it’s women who are the biggest chocolate hounds – in my household, I assure her that my other half Peter is the one who really can’t get enough, but frankly he’s more like a woman than me in most ways (loves baking, does all the cooking, much better on fashion, always trying to dress me – for starters) – and they are drawn to her distinctively pretty packaging.

The illustrations on the front of the packaging are by Laura Tinald, another Birmingham native whom Sally has been wanting to work with since spying her art in a café back home.

On the back of every wrapper is a short lesson of sorts about the bard:

William Shakespeare, born 450 years ago in Stratford-upon-Avon, has captivated audiences across the centuries with his work. Innovative, inventive and endlessly interpreted, we present an exclusive range of chocolate bars celebrating Britain’s greatest playwright.

And then a brief character bio. For instance, for Miranda from The Tempest:

The Tempest’s Miranda has lived in exile on an island for as long as she can remember. Sheltered from the world, she is empathetic, innocent and heartfelt. She sees goodness and beauty in the human race, viewing life with wide-eyed wonder.

The flavours are also loosely inspired by Sally’s take on the characters and their circumstances, as well as Twitter-based taste tests to come up with compelling concoctions.

So, for Miranda, it’s Sea Salt, for Lady Macbeth, a blood Orange. The next six Leading Ladies, soon to be released, include Rosalind from As You Like It (Raspberry because “she spends a lot of time in the forest”), and Katherine from The Taming of the Shrew (Chilli, because she’s so fiery) and Desdemona from Othello (Espresso…).

Currently, Sweet Theatre bars (RRP £3.50) are stocked exclusively by Harvey Nichols – who she contacted cold through a form on the store’s website – but Sally is already in discussions with another big department store and various West End theatres, as well as, of course, Shakespeare’s Globe and the RSC.

Meanwhile, Sally continues with various theatre projects, including chairing a major fundraising gala for the Roundhouse in Camden, and a musical inspired by the 1970s teen magazine Jackie in 2015.

Sweets to the sweet, hello!, I say.