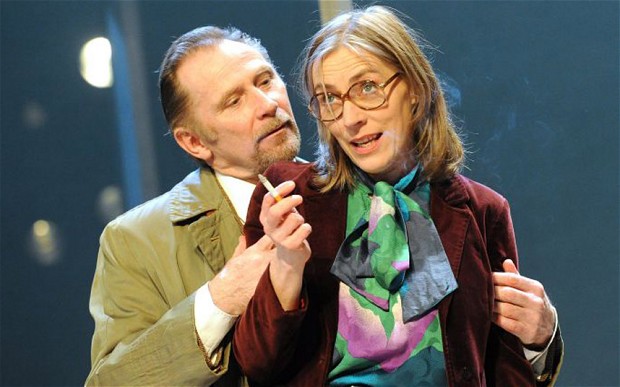 Saskia Reeves and Danny Webb play She and He in The Mistress Contract at the Royal Court, running until 22 March 2014

Two things kept coming to mind as I watched The Mistress Contract at the Royal Court. The two-hander, starring Saskia Reeves and Danny Webb, is based on a memoir, authored by the anonymous She and He and published last year. The book, and subsequent play by Abi Morgan, details the couple’s three-decade consensual and contractual arrangement in which he provided her with a home and income and she provided him with on-demand “mistress services”.

The first thing that came to mind was another book, A Guide to Surviving Life as a Mistress, published in 1999. I interviewed its authors for a newspaper feature at the time. I remember how desperately sorry I felt for these two women, who called themselves Heather King and Jordan Hayes, as they had invested so much energy into a (surprisingly dry, considering the subject matter) 192-page rationalisation of their life choices – and one that served as a pretty stark cautionary tale for other women considering the same choices.

I say that without moral judgment. Temptations surround us and we, as humans, are all highly fallible beings whose hearts and hormones often rule the head. But, whether “reluctant” or willingly “wanton” (the authors’ terms), signing up to the life of a mistress, of birthdays and holidays spent alone, of hiding your relationship from so many, of knowing that you may well be causing unknown harm to another woman, to children… is a recipe for near-certain misery. Which the book, and its very “survivor” title, highlights.

But at least the mistresses in A Guide to Surviving… were commenting from a point of passion. In The Mistress Contract, neither He nor She is married so the only thing stopping them from making other forms of commitment to one another is… well, a lack of commitment. Instead, they contract and conduct their ‘relationship’ in the most clinical and intellectualised terms. 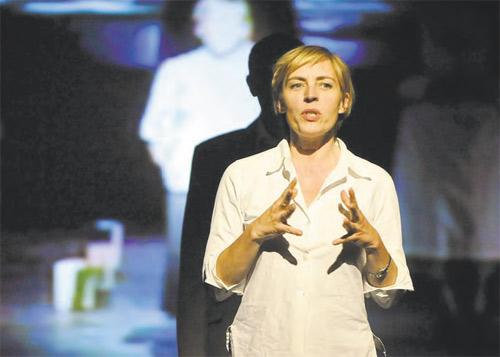 Saskia Reeves as Ruth in Complicite’s A Disappearing Number

Which is in stark contrast to the second thing that kept coming to mind during the performance I attended: Saskia Reeves’ performance in Complicite’s 2007 play A Disappearing Number. That piece, conceived and directed by Simon McBurney (@SimonMcBurney), was inspired by the life of Srinivasa Ramanujan (1887-1920), a poor Indian Brahmin, and his collaboration with Cambridge don GH Hardy. The Ramanujan plotline was set against the modern-day story of a mathematician named Ruth, played by Reeves, and her unlikely marriage to globe-trotting businessman Al.

You’d think a play about maths would more likely be the snoozer, but A Disappearing Number remains one of my most gripping and romantic theatre memories. In the scene that kept replaying on my mind’s screen during The Mistress Contract, Reeves’ Ruth and Al have snatched a few moments together in an airport hotel room.

He asks: Why on earth did you fall in love with me? … Don’t say it’s because I look like Ramanujan.

Ruth replies: You give me hope for the future… Why did you fall in love with me?

The stand-out from that exchange for me is Q: “Why do you love me?” A: “Because you take away my panic.” That is so beautiful it still brings a tear to me eye. I am loved, I am safe, you make me safe.

I don’t think Reeves’ She felt that about Webb’s He for a single second in The Mistress Contract.