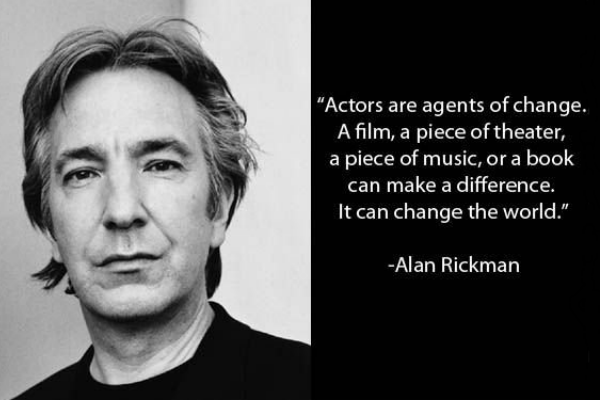 You don’t need me to tell you that Alan Rickman passed away last week, or how shocking and unexpected his death from cancer was at the age of 69, just days after his contemporary David Bowie shuffled off this mortal coil in similar circumstances.

I had just sat down at my laptop mid-day last Thursday after returning from a meeting when the news popped up in my Twitter feed. I was working in a shared office that day and was so startled by the news, I interrupted a stranger at the desk opposite to tell him the news. It turned out he [Steve] had once met Rickman as a child at an autograph-signing.

I’ve been a little luckier. I was lucky enough to see Rickman perform onstage, playing Elyot opposite Lindsay Duncan‘s Amanda in Howard Davies‘ production of Noel Coward’s Private Lives, at the Albery Theatre (now the Noel Coward) in 2001. That performance won him Best Actor in the first year that I ran the WhatsOnStage Awards.

I had the immense privilege of chairing a post-show Q&A with Alan Rickman – I was terrified but, by all accounts, it went very well…

It was the Awards five years later that gave me the opportunity to meet him a few more times. My Name is Rachel Corrie, about the American student activist who was killed by an Israeli bulldozer while trying to protect a Palestinian house, won three prizes, including Best New Play in the 2006 Awards. The play was based on Corrie’s emails and diaries, edited by Rickman and Guardian journalist Katharine Viner. Rickman also directed actress Megan Dodds in the solo piece. I met Alan, Katharine and Megan to present their awards.

When My Name Is Rachel Corrie transferred to the West End’s Playhouse Theatre, after its run at the Royal Court and in New York, I also had the immense privilege of chairing a post-show Q&A with Rickman. (I was terrified but, by all accounts, it went very well! In the dressing room afterwards, he told me I’d done a great job. Phew!)

To most outlets, Rickman seems to have been “the Harry Potter and Die Hard star”, first and foremost. I think this does him a disservice.

I tweeted about some of this on Thursday, when I was also struck by how many theatres were tweeting about Rickman too. These were not just condolences but also some terrific archive photos from stage productions early in his career and also heartfelt tributes – so many – to how much he has continued to support them in recent years, through patronage, donations, special appearances and more. While Rickman may not have been on the London stage in many years, he was doing a great deal behind the scenes theatrically.

Since Thursday, of course, there has been – rightly – an avalanche of media coverage about Rickman’s career. But I’ve been a little disappointed at how heavily weighted its been towards his film career. To most outlets, he seems to be “the Harry Potter and Die Hard star”, first and foremost. I think this does him a disservice.

So, I wanted to carve out this little space that concentrates on Rickman’s enormous contribution to the stage. I’ve collected some salient press cuttings – and also theatrical tweets in his honour. Also, as a Labour Party member myself, I wanted to big up his years of political activism and how that affected people – including former Labour leader Neil Kinnock, current leader Jeremy Corbyn and the late Rachel Corrie‘s family.

Rest in peace, Alan Rickman. Thank you for everything.

More tributes from actors and celebrities
The Telegraph live-blogs reactions to news of Rickman’s death, collecting tweets from other thespians (and random celebrities) including Ian McKellen, JK Rowling, Stephen Fry, Daniel Radcliffe and Eddie Izzard plus his most quotable quotes and memorable film roles. His Labour Party contribution is hailed here by Jeremy Corbyn and David Miliband. 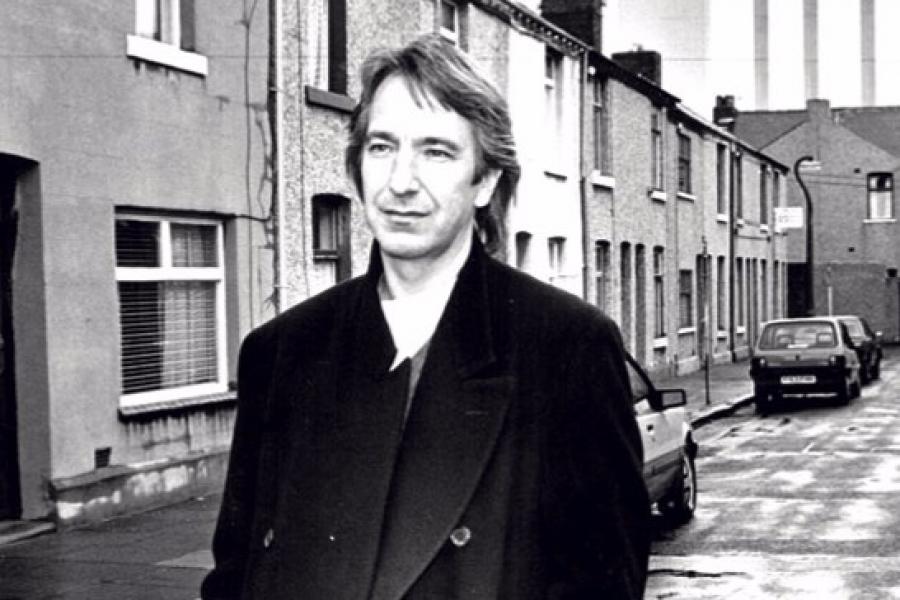 The Stage: Obituary
With a hypnotically lugubrious voice that sounded like caramel drenched in molasses and hinted at darker, more dangerous depths, Alan Rickman became an unlikely sex symbol on stage and… 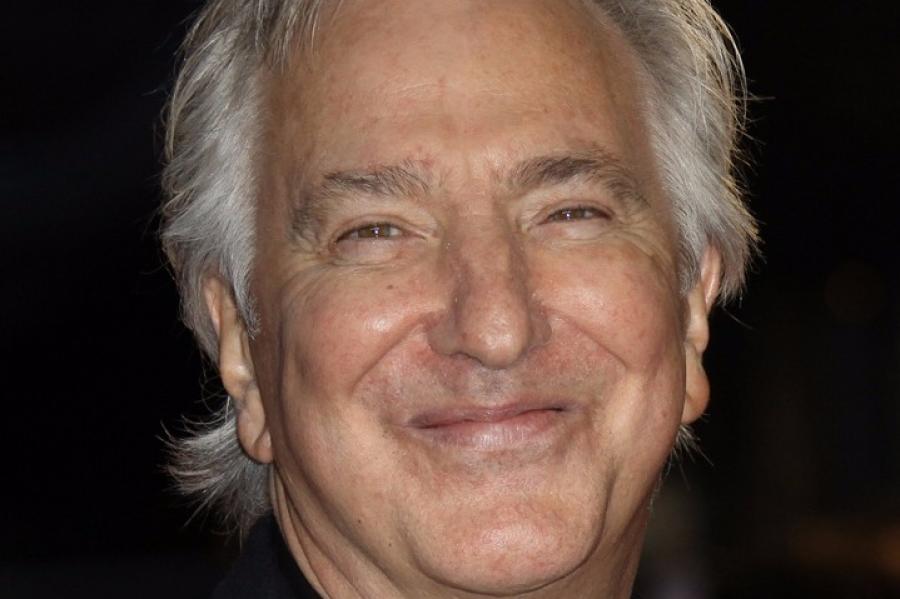 Time Out’s former theatre editor remembers Rickman
Among the tributes to the late, great Alan Rickman who passed away this week at the age of 69, there’s been a lot of focus on his film work. But before his big break with ‘Die Hard’, he… 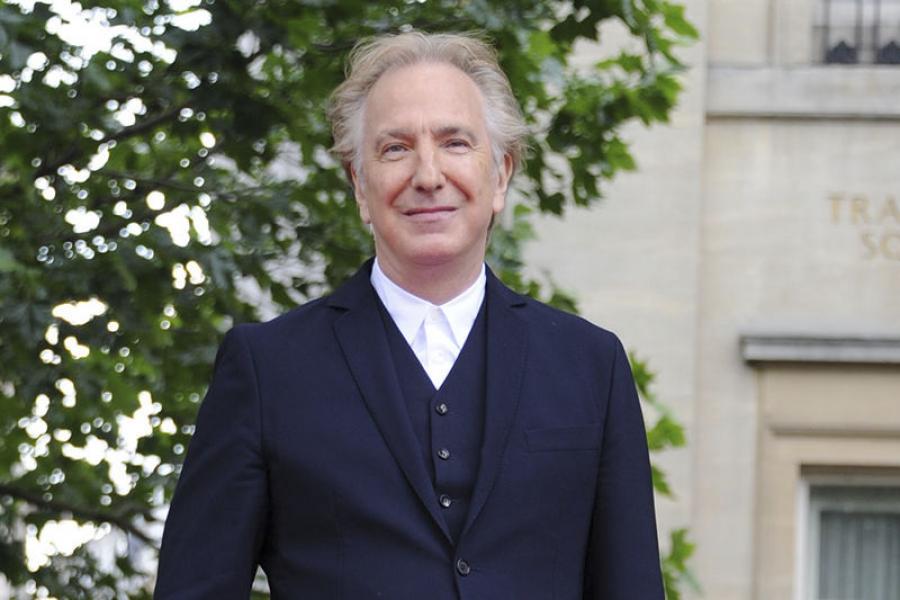 Official London Theatre: Obituary
One of Britain’s greatest actors Alan Rickman has tragically died aged 69. The much-loved and hugely respected giant of stage and screen had been suffering from cancer. The devastating…

RSC performance dedicated to Rickman
Alan Rickman started his acting career in Stratford at the RSC in the late-1970s. We recall his career here, while Greg Doran from the RSC pays homage. At the end of last night’s…

West Yorkshire Playhouse in tribute to Rickman
Leeds Harry Potter actor Matthew Lewis is among the stars to pay tribute to one of the ultimate on-screen ‘baddies’ Alan Rickman. The 69-year-old London-born star died from cancer,…

Craig Corrie: Alan Rickman gave the greatest gift to my late daughter, Rachel Corrie
My family and I were saddened on Thursday morning to learn of the death of Alan Rickman – too sad to write our feelings at the time. Alan, of course, is famous as an actor and director,…

Rickman remembered by Rachel Corrie’s father for dramatising his daughter’s life and death
Alan Rickman, the renowned British actor who died last week at age 69, received a touching farewell on Monday from the father of Rachel Corrie, an American activist killed by an Israeli…

Hammersmith MP Andy Slaughter on Rickman: ‘a good man, a Labour activist – and a local boy’
This international movie star has another profile.  As a west London boy, Labour Party loyalist and supporter of the arts in his local community.  And in the Hammersmith constituency I represent, this means more than the Hollywood CV… Alan Rickman had back story and local story which was authentic and grounded in the community he grew up in and to which he gave so much.

Neil Kinnock on Rickman: ‘great company and a staunch comrade’
His socialist convictions were rooted and reasoning. He was, he said, “born a card-carrying member of the Labour party”, and he and his beloved partner, Rima Horton, unfailingly showed on issues great and global, local and small, that they had an irrepressible commitment to economic, social and civil justice.

Alan Rickman the political activist
I met Alan Rickman in 1967 when I was a journalist, setting up an “alternative” local paper in Notting Hill, west London. Alan was training to be a graphic artist and came on board as the paper’s designer. We shared the same politics and became good friends. I admired him for his beliefs and activism, and not just his acting.