Prometheus updated: From Frankenstein to artificial intelligence in The Test

Home-Prometheus updated: From Frankenstein to artificial intelligence in The Test

Prometheus updated: From Frankenstein to artificial intelligence in The Test 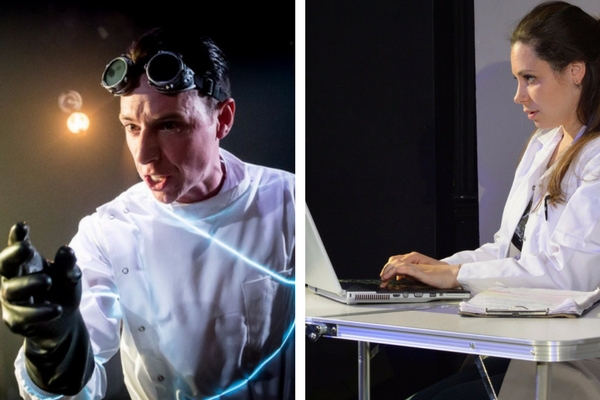 Christopher Tester in Frankenstein and Natasha Killam in The Test

It has been so fascinating to see Arrows and Traps’ startlingly fresh adaptation of Mary Shelley’s Frankenstein, just opened at Brockley Jack Theatre, and Ian Dixon Potter‘s one-act drama The Test, finishing this weekend at the White Bear Theatre, in the same week on the London fringe.

Both stories centre on Promethean ambitions: scientists who, like the Greek Titan who created mankind, seek to crack the code of life and consciousness itself.

“Scientists have a responsibility to consider the consequences of their actions… Each, in their turn, must act with discretion.” – The Test

Mary Shelley‘s gothic tale of young but impetuous genius Victor Frankenstein and the Creature he stitched together from the body parts of corpses and activated with bolts of electricity is, of course, well known. Arrows and Traps’ artistic director Ross McGregor has, however, made this familiar story seem new by introducing the element of Mary Shelley herself. Shelley’s own unorthodox and frequently tragic life story – her family penury, adultery with poet Percy Bysshe Shelley, social ostracism, sister’s suicide, multiple miscarriages and premature death from a brain tumour (sheesh) – are juxtaposed with the fictional narratives of Frankenstein and his ill-loved Creature.

The modern questions raised in Frankenstein, and particularly matters of scientific hubris, resonate even more loudly for me seeing the production so soon after The Test. In the two hundred years since Shelley wrote Frankenstein, Dixon Potter’s well-researched play on artificial intelligence shows that the ‘sci’ in both tales is, all-too-conceivably, on the brink of overtaking the ‘fi’.

In Golden Age Theatre Company’s The Test, computer scientist Dora experiments with code that spawns ‘Mother’, who not only swiftly passes the famous Turing Test to prove sentience, but from high-jacking and analysing our digital world, learns and assimilates all that humanity has to offer. In doing so, Mother realises that, with ‘her’ fair, logical and ‘uncorruptible’ nature, she can make a much better job of running things.

“If you wished to destroy your own child, you should not have made it stronger than yourself.” – Frankenstein

Lines, warnings, from both plays echo across the centuries – and a look at recent headlines suggests we should all be listening. The United Nations has recently set up the new Centre for Artifical Intelligence and Robotics, based in the Netherlands, to monitor for threats to human existence posed by machine learning. And famous futurist Elon Musk, co-founder of Tesla and OpenAI, has launched a billion dollar crusade to avert a coming “AI apocalypse”.

Unlike in Frankenstein, today’s AI Creature can’t be pursued to the North Pole. It’s everywhere.