Press pass: Reviews and everything else you need to know about Elf the Musical

Home-About Terri – Personal Blog - Press pass: Reviews and everything else you need to know about Elf the Musical

Press pass: Reviews and everything else you need to know about Elf the Musical 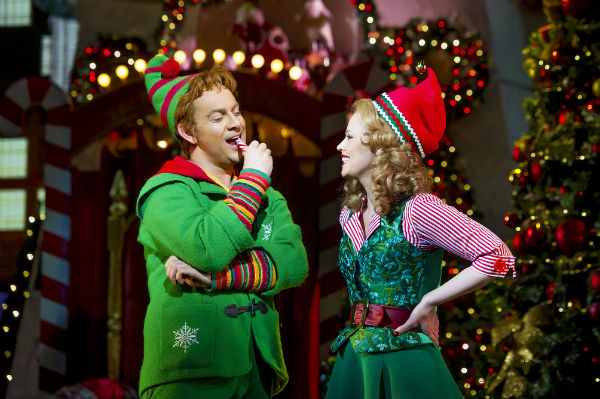 Ben Forster and Kimberley Walsh in Elf The Musical at the Dominion Theatre. © Alastair Muir

Maybe I’m just an old softie. Okay, yes, let’s admit it, I am. I’m also a lifelong believer in the restorative power of Christmas music which, like Katrina and the Waves’ “Walkin’ on Sunshine”, is my go-to Spotify choice if I’m feeling down – never mind if it’s a July heatwave, sleigh bells have been known to ring chez Paddock.

So how can I not be enticed by a zealously seasonal show like Elf the Musical? It’s catchiest tune, with its does-what-it-says-on-the-tin “A Christmas Song”, exhorts us all to:

What’s not to love here? Certainly, Ben Forster as Buddy the Elf is adorable (far more so than Will Ferrell in the film version); the rest of the company are well-drilled pros (with particular stand-outs from Jennie Dale and Jessica Martin, respectively, the PA and wife of Buddy’s workaholic dad, played with memorable grumpiness by Joe McGann); and for all the negative press about high ticket prices, you can clearly see on the stage where the money’s going, even before Santa’s sleigh takes off (a nice coup de theatre).

I tweeted on the night that you’d have to be a Grinch not to leave full (at least half full?) of the Christmas spirit. Well, there are a few Grinches out there!

You’d be a real grinch not to leave @elfmusicaluk full of Xmas spirit or feeling a tad #sparklejollytwinklejingly pic.twitter.com/lPHdUzdVPj

Reviews and ticket prices aside, this show has generated more column inches thanks to the casting of Kimberley Walsh as Buddy’s love interest Jovie, and the attendance of her former Girls Aloud bandmates at the opening. I’ve rounded up key coverage below.

Catch up on all the social from the show and cast 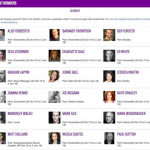 Elf is also the first musical I’ve attended since launching my new theatre media venture, Stage Faves. Check out the show page where, amongst other things, you’ll find full Twitter listings for the principal cast – and much else. Lots of jollity.

Elf the Musical continues at the West End’s Dominion Theatre until 2 January 2016. 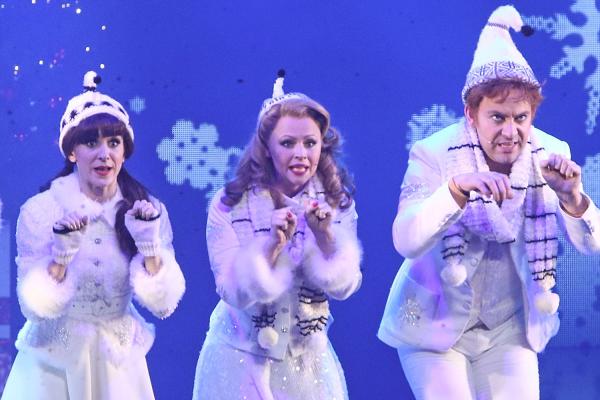 EVENING STANDARD – ★★★★
FIONA MOUNTFORD: If too many people ask for Elf tickets for Christmas, poor Santa will go bankrupt. This new musical based on the wildly popular 2003 Will Ferrell film made headlines for all the wrong reasons when it was announced that top price seats would cost a mind-boggling £240. Critical knives, I suspect, were being sharpened in anticipation of the show’s opening, but here’s the news: it’s a charming evening’s entertainment for children of all ages. 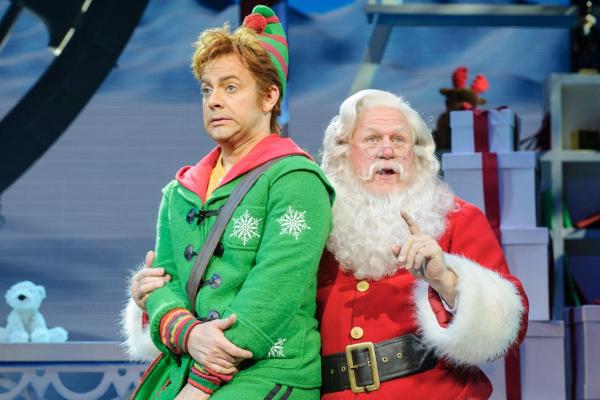 THE TELEGRAPH – ★★★
DOMINIC CAVENDISH: Never mind the recent mass stampede to be first in line for the Harry Potter play next summer. The most startling box-office record of the year has been made by this musical version of the hit Hollywood comedy about an elf-raised man-child who leaves the North Pole to seek out his real dad in NYC. 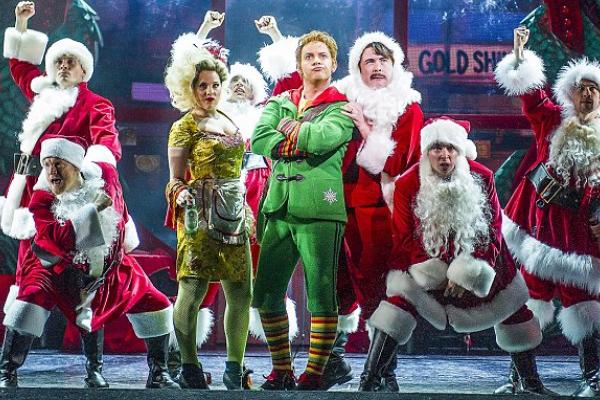 QUENTIN LETTS: Jamie Oliver would not approve of Elf, a Hollywood spin-off, which opened on the West End this week. Boy, it’s sugary. To stave off a diabetic high at the interval, I ordered myself a Diet Coke — the first time I have ever done that. It was little more palatable than the show. And yet this is a big, professional musical, seamlessly engineered, targeted at the Christmas family market with relentless commercialism. 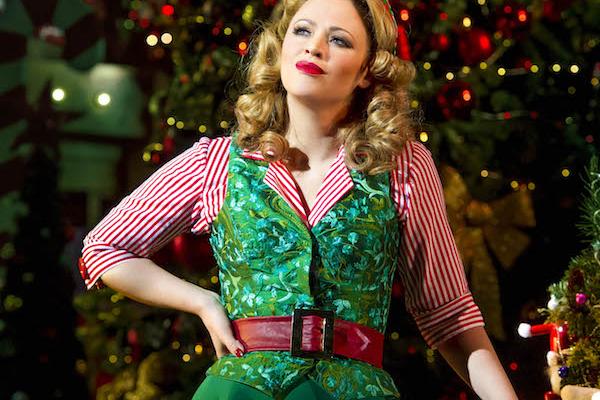 THE ARTS DESK – ★★
MARIANKA SWAIN: This new family musical, based on the popular 2003 Will Ferrell film, has rightly been censured for its extortionate seating prices, hosting the West End’s most expensive top-end tickets at £267.50 a pop – and that’s without the drinks, ice cream and £10 souvenir programme. So, is it worth it? 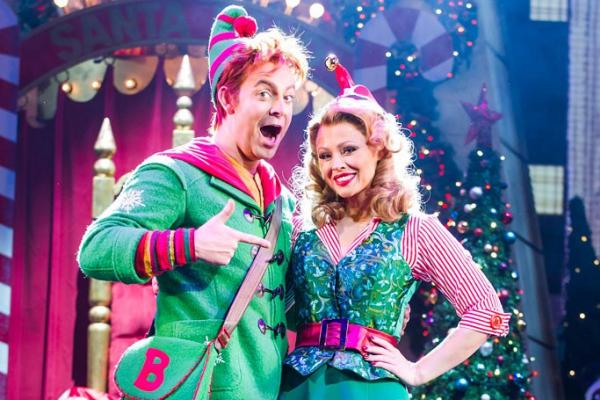 THE STAGE – ★★★
MARK SHENTON: This Christmas musical attraction has already gained notoriety for setting a new record for a top West End price of £240 a ticket. But if that reeks of greed, the show itself exudes far less cynical motives, and is in fact an amiable, good-natured seasonal show, which reconnects audiences with Father Christmas. 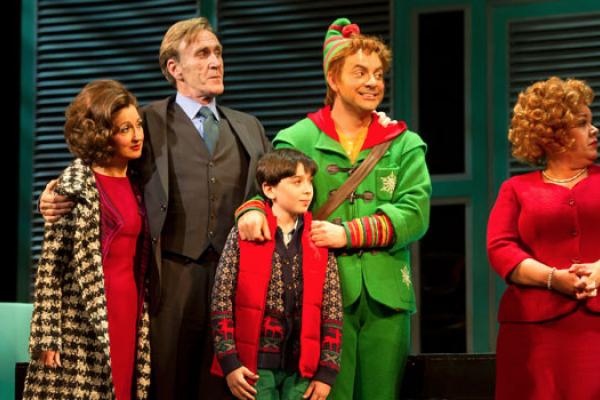 BRITISH THEATRE – ★★★
DANNY COLEMAN-COOKE: They say Christmas starts earlier every year and anyone who has been to the Dominion Theatre recently would be hard pressed to disagree. With fireworks being dusted off in readiness across the capital, there was a different sort of festivity in the air this week thanks to Elf the Musical. 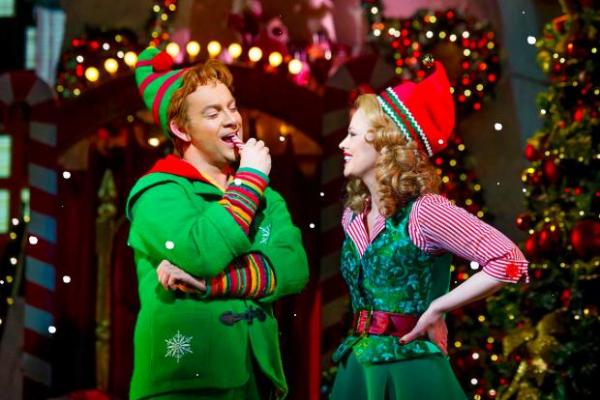 BROADWAY WORLD
NATALIE O’DONOGHUE: Originally a movie, Elf the musical is the story of Buddy The Elf’s search to find his real father. As a baby, Buddy crawled in to Santa’s sack and found himself at the North Pole. Raised by elves, he makes it to age 30 before realising he is in fact human, and heads to New York City to find his real father. 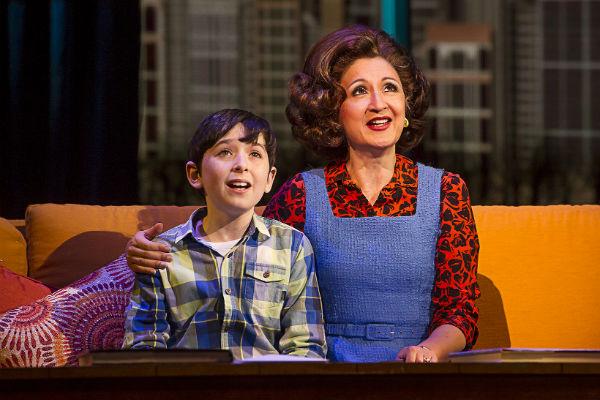 MY THEATRE MATES > THEATRE CAT – ★★
LIBBY PURVES: Play critic-cliché bingo once they’re out! One point each for “Elf ’n Safety”, “National Elf”, kids with phones outside taking Elfies, pixie-lated publicity, gnome runs, and anyone saying “this’ll sleigh them”. The one about feeling good “from head to mistle-toe” is actually in the lyrics, so that doesn’t count. 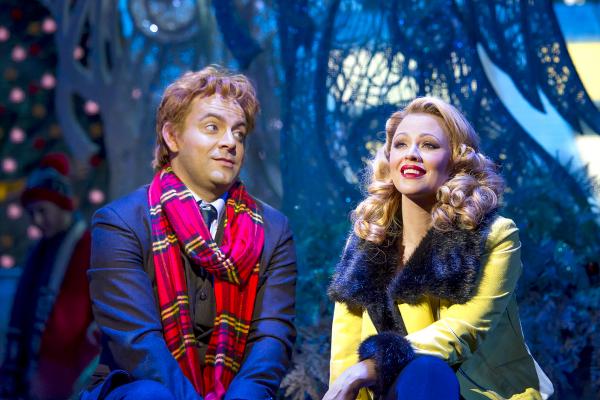 LONDON THEATRE – ★★★
MARK SHENTON: Christmas, of course, seems to get earlier every year; we sure believe in the commercial opportunities of Christmas, if not Father Christmas. Elf, a new musical based on the 2003 film of the same name, wants us to believe in both. On the one hand, it is blatantly cashing in — the production has notoriously set a new high for top ticket prices in the stalls of the Dominion or £240. 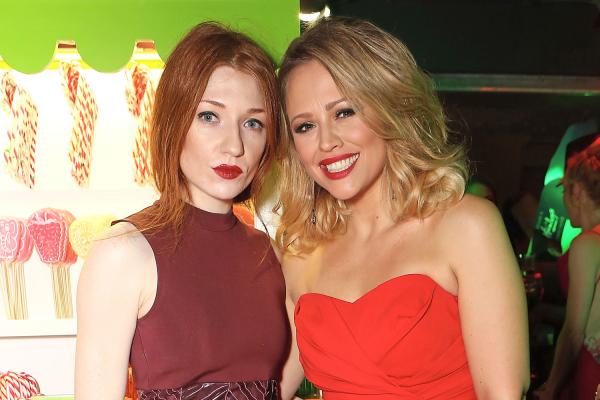 Kimberley Walsh says her one-year-old son Bobby was her “trial audience” while she was practising for her starring role in West End musical Elf. After winning a standing ovation for her role in the show, the former Girls Aloud singer told the Standard how she had been juggling the part with looking after Bobby and planning her wedding next year to boyfriend Justin Scott. 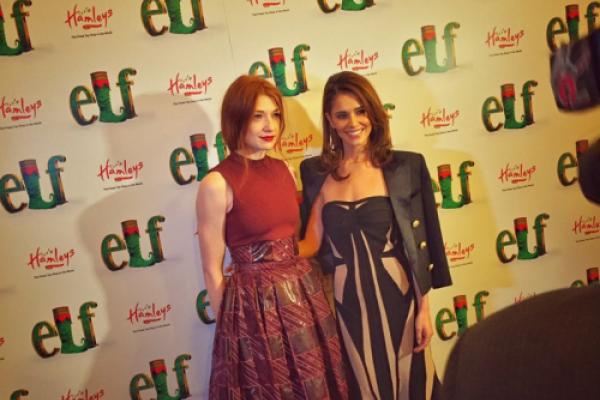 Cheryl Fernandez-Versini And Nicola Roberts Disrupt Elf Musical
Ever since it was revealed that Elf The Musical was coming to the West End, Christmas lovers across the country were beside themselves with excitement, and when it was announced that Zooey Deschanel’s film character, Jovie, was to be played by former Girls Aloud Star Kimberley Walsh, we just knew that this was going to be a recipe for success.

Elf the Musical hits London… but tickets are quite expensive

Are you going to watch the stage adaptation? Tickets for Elf the Musical are on sale but you’d be hard-pressed to find them for less than £50 each. In fact, tickets go into the hundreds of pounds for the show, which is adapted from the 2003 film Elf starring Will Ferrell and Zooey Deschanel. 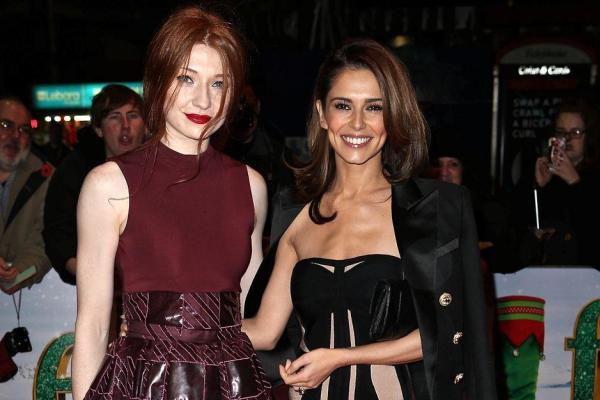 CHERYL Fernandez-Versini makes sure she doesn’t come up short at the premiere of Elf The Musical yesterday. The stunning X Factor judge, 32, stole the show as she supported her former Girls Aloud pal Kimberley Walsh in London’s West End. Kimberley, 33, and Ben Forster, 34, who won ITV’s Superstar, take the lead in the remake of the 2003 Will Ferrell film. 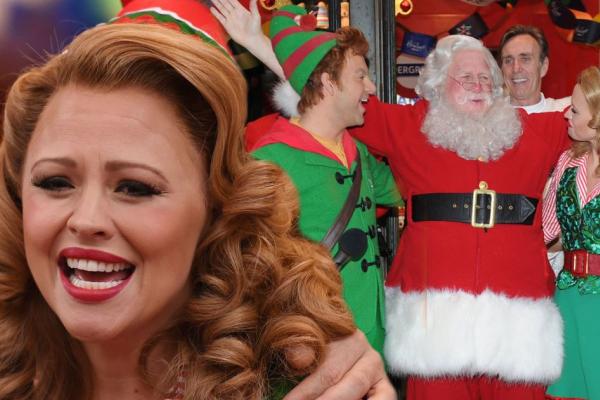 Kimberley Walsh brings Christmas cheer with her Buddy and Elf: The Musical cast

It’s often billed as the best Christmas movie of all time, so there is a lot of pressure on Kimberley Walsh’s shoulders as she stars in Elf:The Musical. The former Girls Aloud star is set to tread the boards in the new West End show, which is a musical adaptation of the hit movie that starred Will Ferrell and Zooey Deschanel. 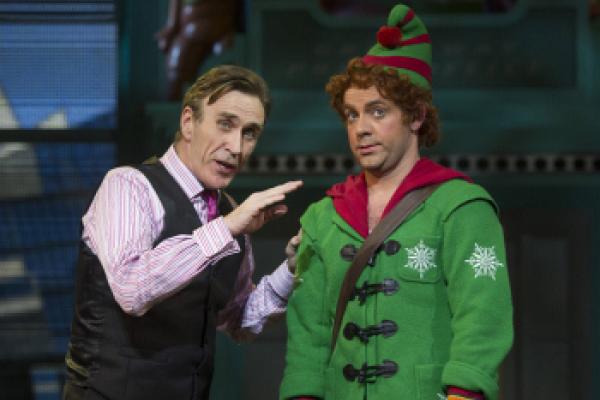 Ben Forster: Reprising Buddy the Elf for Christmas
It will be Christmas before we know it! As the build-up to the festive season grips London, we thought we would embrace some Christmas cheer ourselves, as our reporter Hayden Thomas… 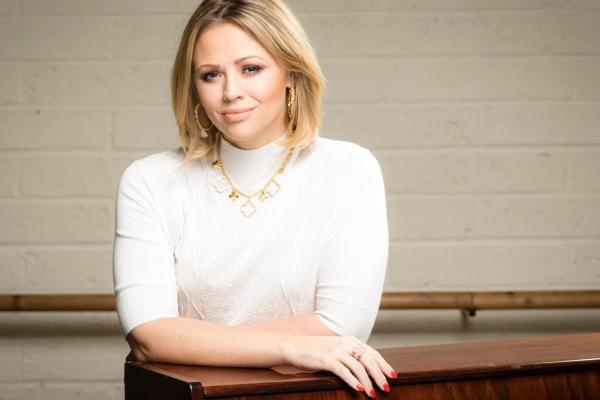 Kimberley Walsh: the pop star  lighting up the West End
When Kimberley Walsh watches her one-year-old son, Bobby, crawl around the huge north London home she shares with her boyfriend, Justin Scott, she says she feels a sense of trepidation… 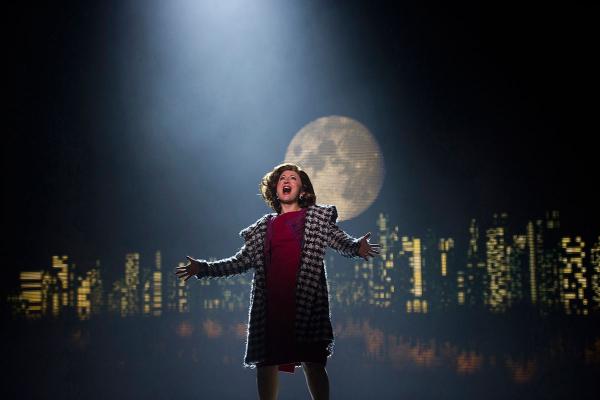 Jessica Martin On ELF: THE MUSICAL!
It feels fantastic – we’ve had a really good response from the audience, and that augurs well for the rest of the run. Is it a bit strange starting a Christmassy show in the middle of… 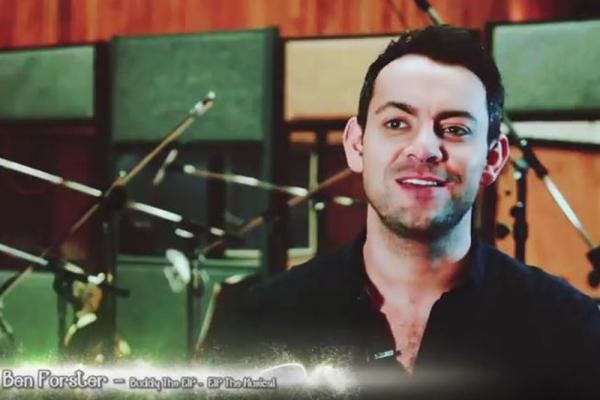 Video: Elf musical’s cast recording
It might be more than two months to Christmas but who can resist a glance behind the scenes as Ben Forster, Kimberley Walsh and co bring festive frenzy to a recording studio, creating the… 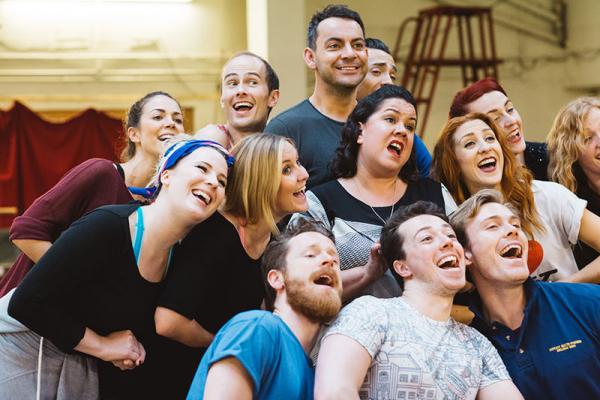 In rehearsal: Elf The Musical
The best way to spread Christmas cheer is singing loud for all to hear… or, if it’s still only October, it’s probably sharing rehearsal images of the Elf The Musical team putting the…

What are the 10 most expensive West End shows in history?
A spokeswoman for Elf said premium prices were introduced as a means of eradicating the ticket touts on the street. She said: “What we’re seeing is people electing to buy at the higher prices to guarantee their being able to see the show on the day they want to.