Press Pass: Everything you need to know about School of Rock The Musical

Home-Press Pass: Everything you need to know about School of Rock The Musical

Press Pass: Everything you need to know about School of Rock The Musical 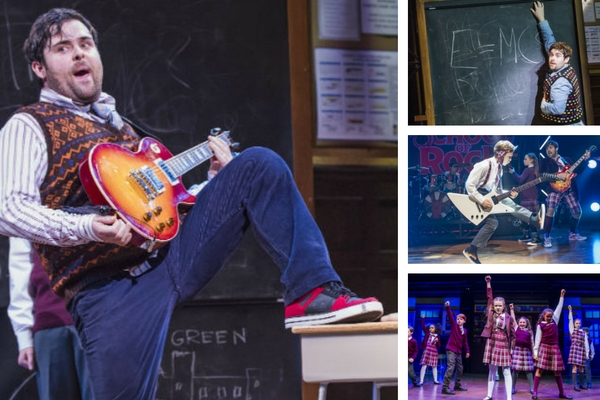 David Fynn and the West End cast of School of Rock. © Tristram Kenton

Here’s everything you need to know about last night’s West End premiere of School of Rock: The Musical in a nutshell: Andrew Lloyd Webber has a monster hit on his hands; the show is both a return to hit factory form for the Lord and also not at all what you’d expect from a Lord; David Fynn as Dewey Finn (that’s still tough to keep straight) is very good and the kids (who they all play their own instruments) are absolutely phenomenal (and they all play their own instruments); the show is either the perfect tonic to Trumpism gloom or Trump in white male privilege musical form; speaking of Trump, Lloyd Webber kept him away from the show on Broadway and may be working on a musical about him; and Myleene Klass wore a very revealing dress to the premiere. 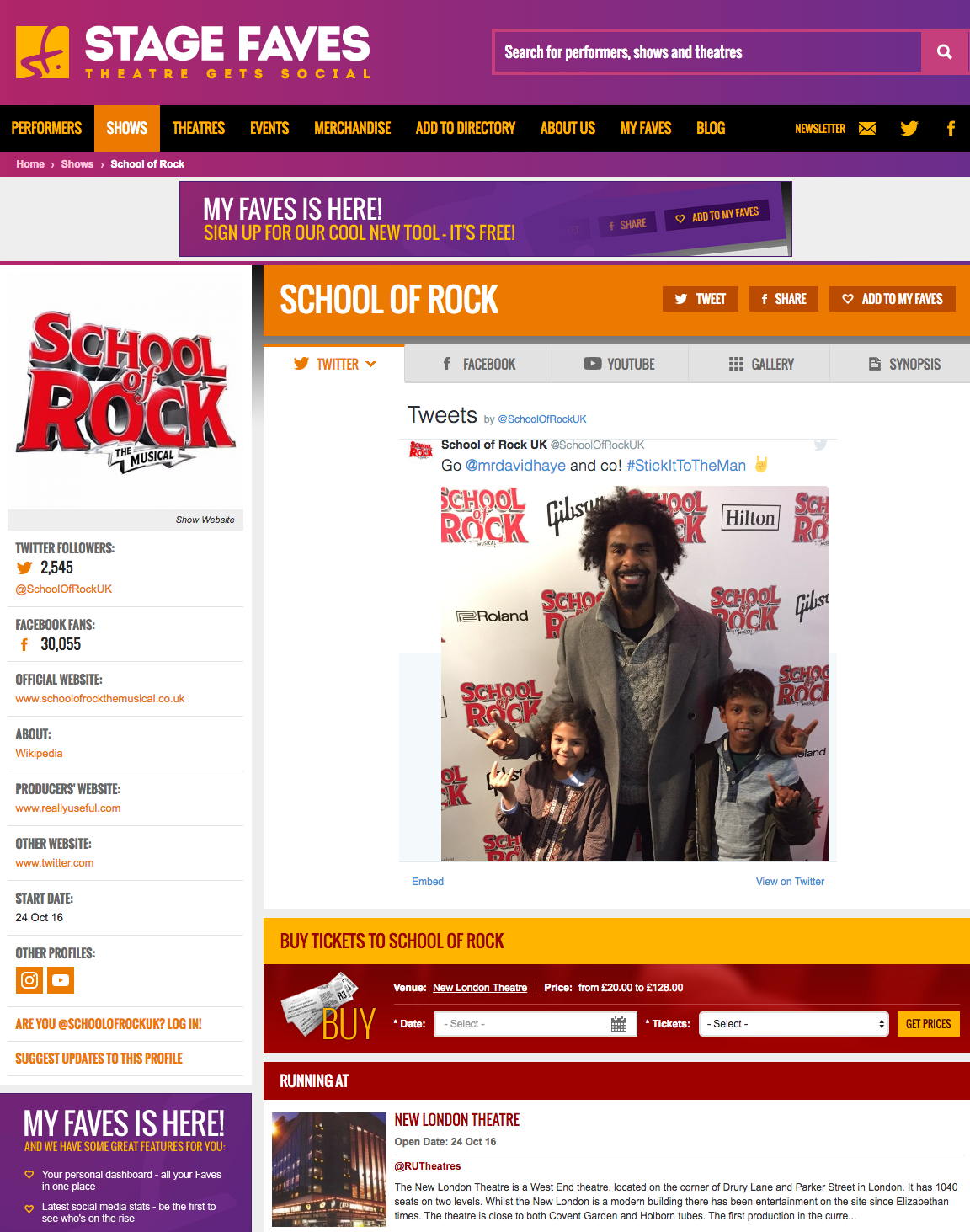 Get all social media for School of Rock & its cast on www.stagefaves.com

School of Rock is based on the 2003 film starring Jack Black as Dewey Finn, a slacker, wannabe rock star and substitute teacher who turns a fifth grade class of straight-A students into an all-conquering rock band. In addition to music from the film, the stage musical features new music written by Llody Webber with lyrics by Glenn Slater and a book by Julian Fellowes (he’s everywhere at the moment – next up in the West End this week, Half a Sixpence, and next year, The Wind in the Willows).

The adult cast for School of Rock also features Florence Andrews, Oliver Jackson and Preeya Kalidas. They’re joined by three teams of 13 young performers who were found via nationwide search – and did I mention that they play their own instruments?

Here’s a round-up of some of the show’s overnight reviews, plus those Donald Trump-focused interviews with Lloyd Webber and Mylene Klass’s spotlight-stealing wardrobe malfunction. I’m seeing School of Rock on Wednesday and can’t wait. Have you got your tickets yet?

School of Rock is at the West End’s New London Theatre. 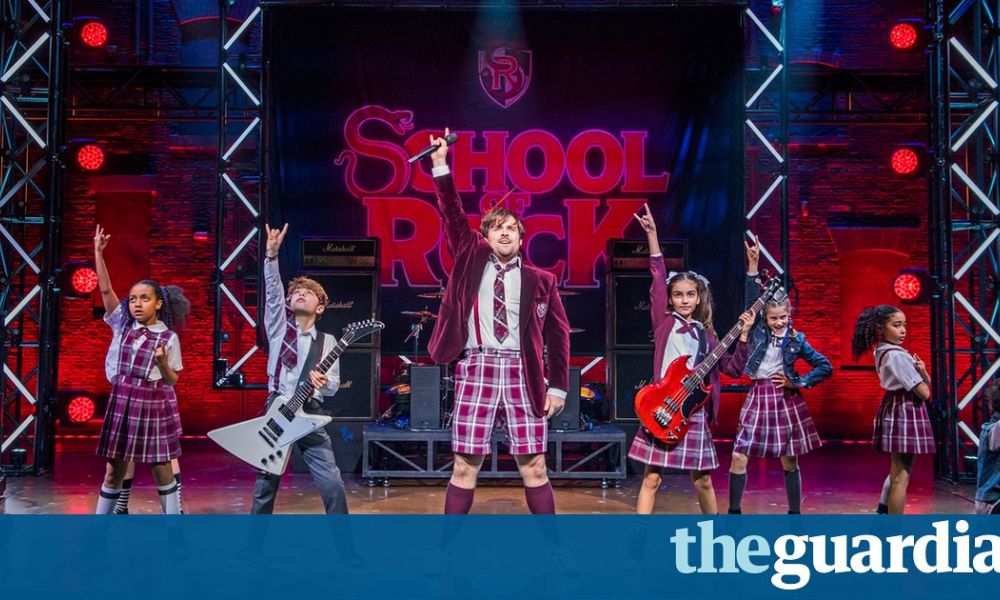 GUARDIAN – ★★★★
Michael Billington: Although the show occasionally feels as if a pair of avuncular old rockers are letting down the remains of their hair, it has an overwhelming good nature and allows its preteen performers to display their genuine talent… This is Lloyd Webber’s most exuberant show in years and, at a time of general gloom, is dedicated to the great cause of cheering us all up. 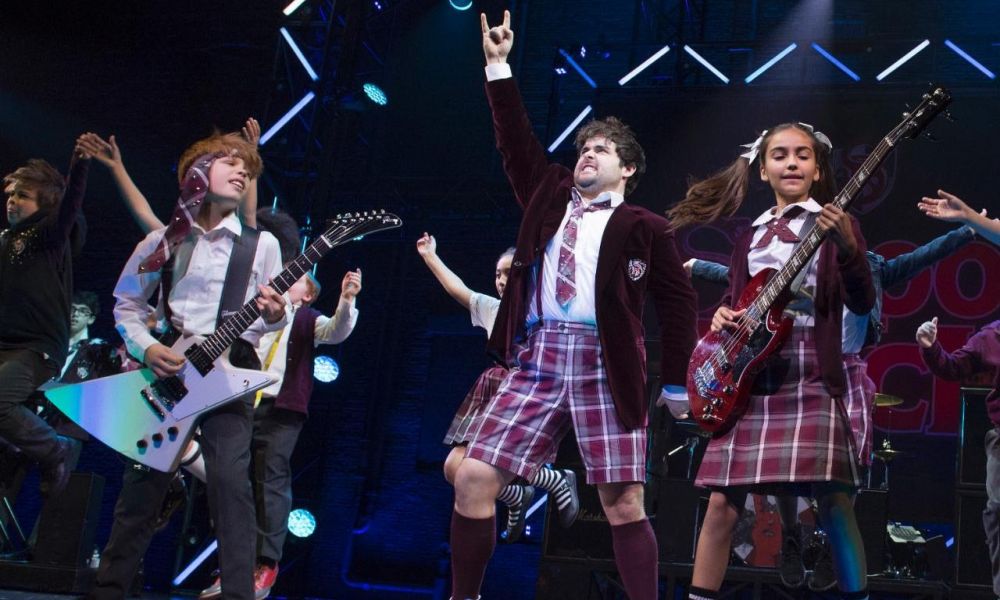 Dominic Cavendish: A stonking hit on Broadway, at a stroke rescuing the ailing artistic reputation and re-booting the commercial fortunes of Andrew Lloyd Webber, School of Rock has now landed with an almighty kerrang of confidence in the West End… The most enjoyable few hours money can buy. 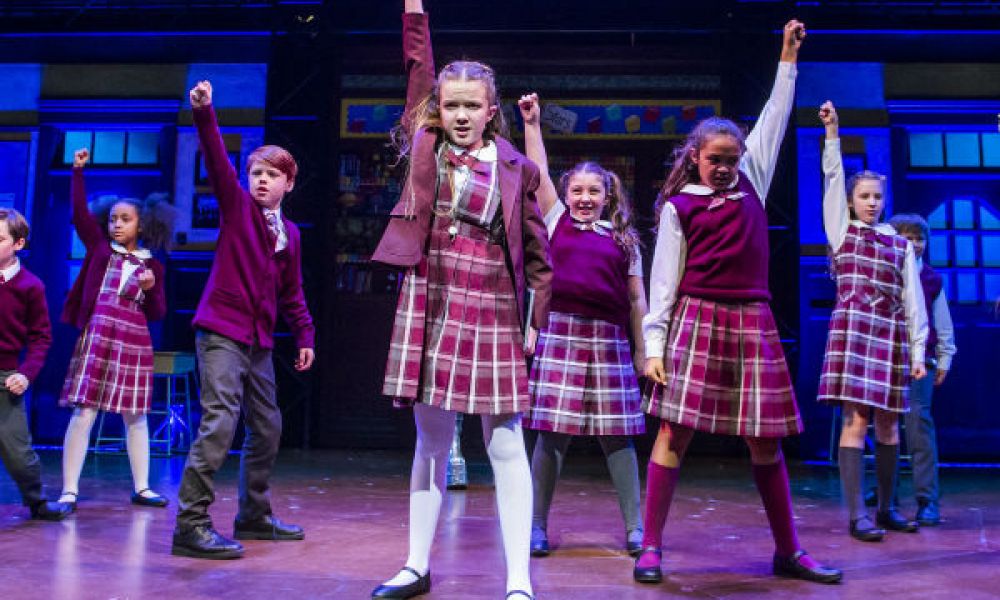 Rod McPhee: School of Rock is a triumphant return for Andrew Lloyd Webber as king of hit musicals… The children, who all play the instruments live, are simply phenomenal. School of Rock doesn’t just mark the end of Lloyd Webber turning out turkeys, it also marks a brave departure for the good Lord. This musical was a gamble, but one that’s paid off spectacularly. 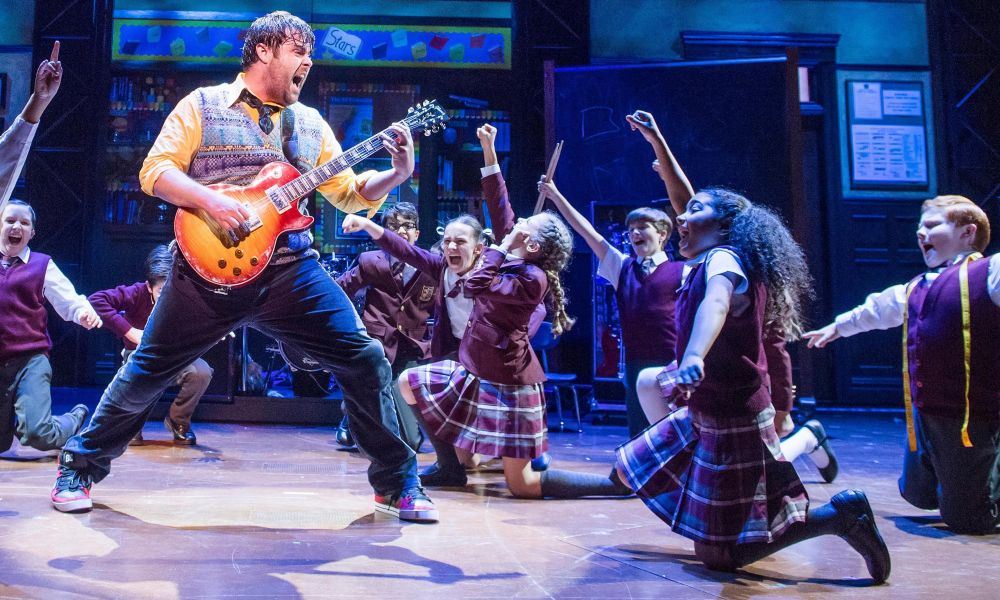 THE TIMES – ★★★★
Ann Treneman: I left this musical humming its best song, a rebellion anthem made for kids called Stick it to the Man. OK, well, maybe more than humming. I also left with a smile and, looking around, I wasn’t alone… It is the kids who make this musical: it’s not as sophisticated, or as dark, as Matilda the Musical, but the story never felt too trite or stereotyped. But, as the Who would say, the kids are alright. 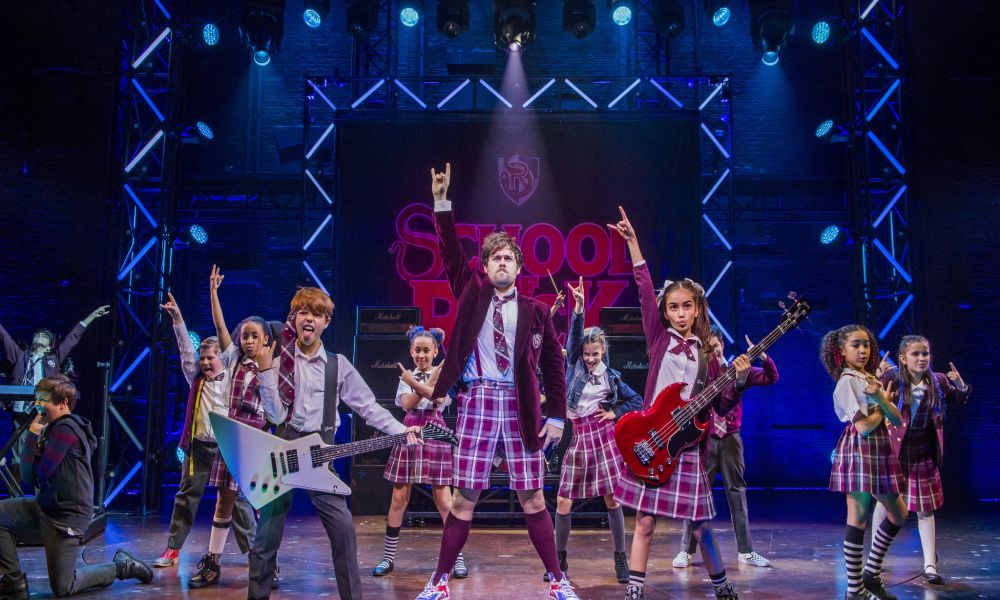 INDEPENDENT
Paul Taylor: The kids are more than alright – in fact, they’re an absolute joy in this ridiculously entertaining new show… It’s clear that the material strikes some deep chord within Lloyd Webber who has here composed his happiest and most confident score in a long while… The performances on press night were universally knock-out… Too many to mention by name.  Along with David Fynn, they all deserve to be showered with gold stars. 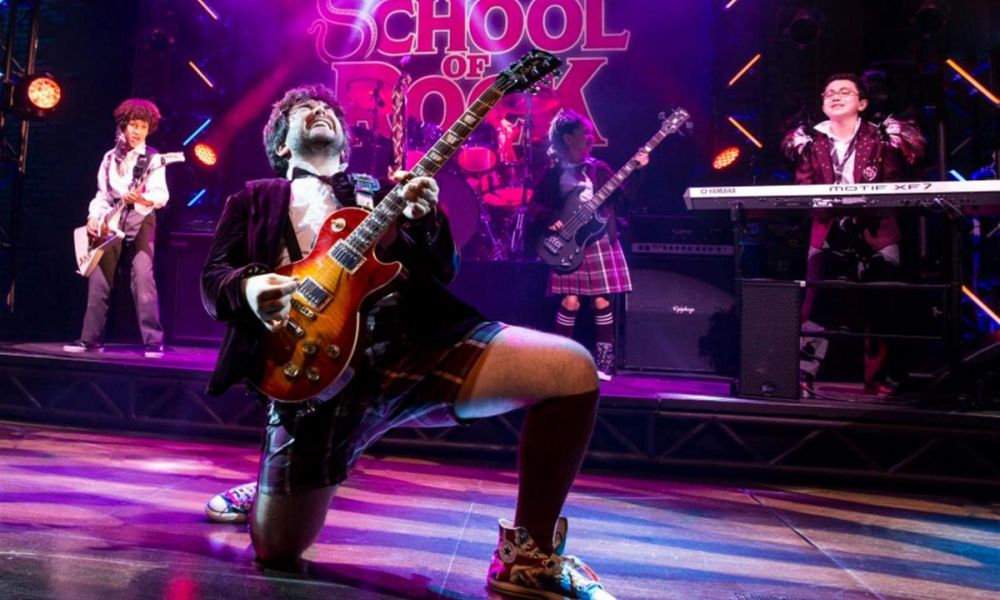 THE SUN – ★★★★
Bill Hagerty: Terrific acting, a witty script by Julian Fellowes and new songs by Andrew Lloyd Webber make live musical School of Rock a must-see. The multi-talented cast play all the instruments and will charm and delight audiences… Every now and again a performer becomes an overnight stage sensation, but never before have 14 such starbursts occurred all at once. 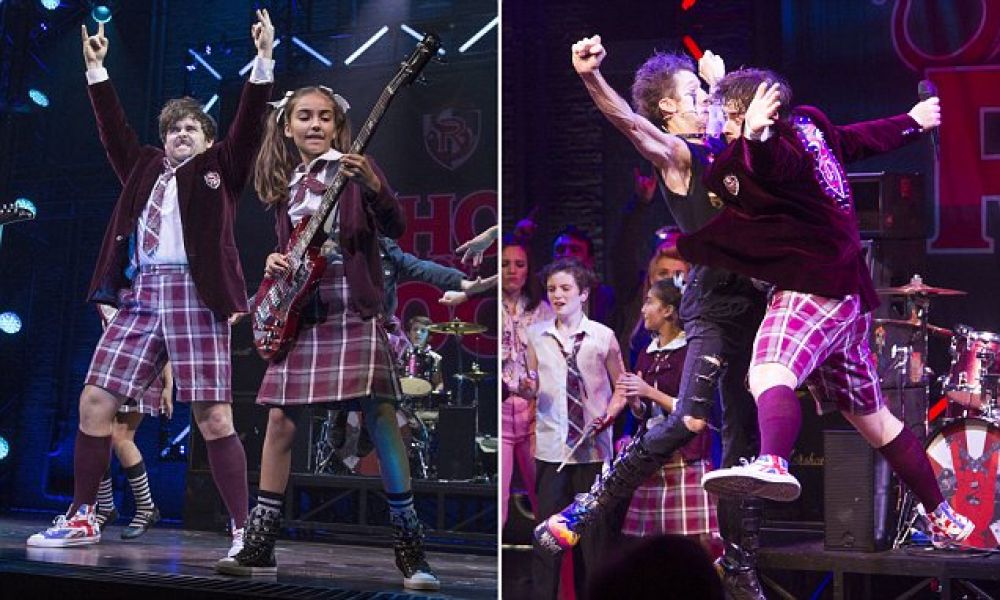 DAILY MAIL – ★★★★★
Quentin Letts: The veteran composer’s latest show, just imported from America, is a rooty-tooty, rock-pumpin’ effort with not a single, warbling ballad to be found. Instead it gives us a stage full of child-rockers playing electric guitar like shrink-wrapped Jimi Hendrixes. Ear-splitting and rib-tickling, it makes for one of the most merrily liberated romps (or riffs) of the year… Left my wife and me joyfully speechless. Terrific fun, this show. 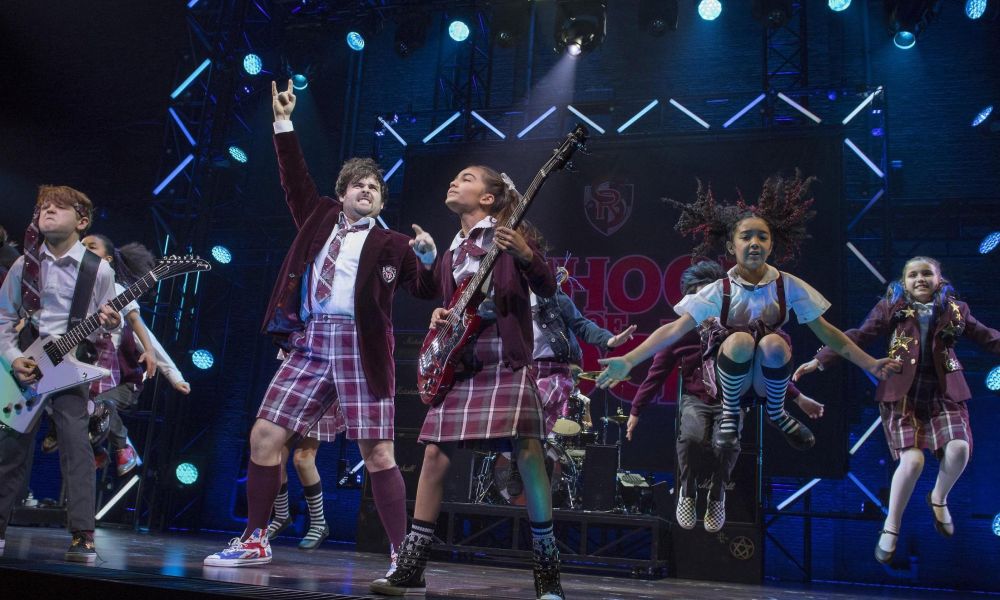 EVENING STANDARD – ★★★★
Henry Hitchings: Andrew Lloyd Webber has a hit on his hands… Based on Richard Linklater’s 2003 film, it’s loud and cheeky, a feelgood experience with a hint of anarchic wildness… Laurence Connor’s production roars into life the moment the students start to fall under Dewey’s spell. With an exuberant silliness that feels like a seasonal tonic, this is a big-hearted, family-friendly show. 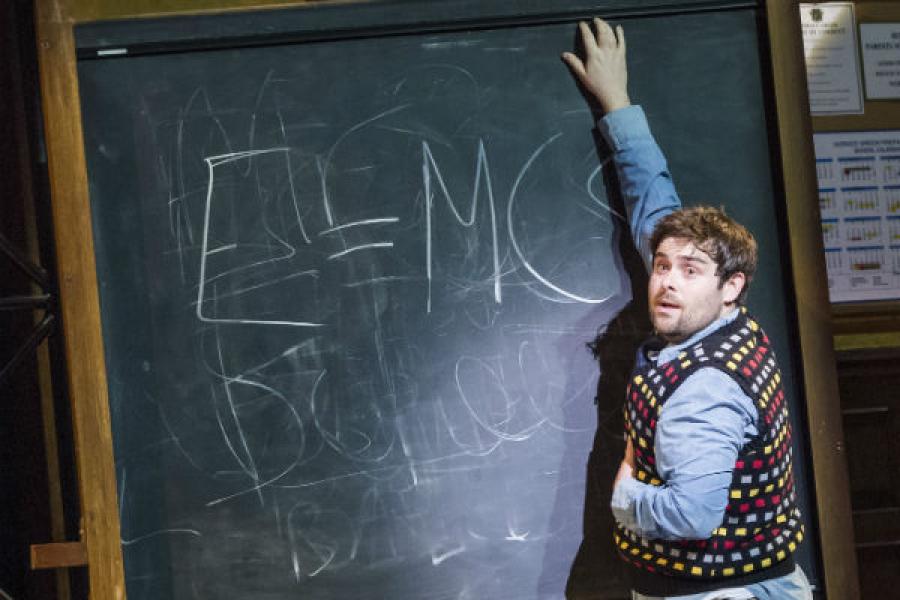 MY THEATRE MATES – ★★★★★
Libby Purves: With Laurence Connor over from the US to direct a fresh British cast, ALW has a stonking hit on his hands: light, joyful, touching, youthful and musically inventive. 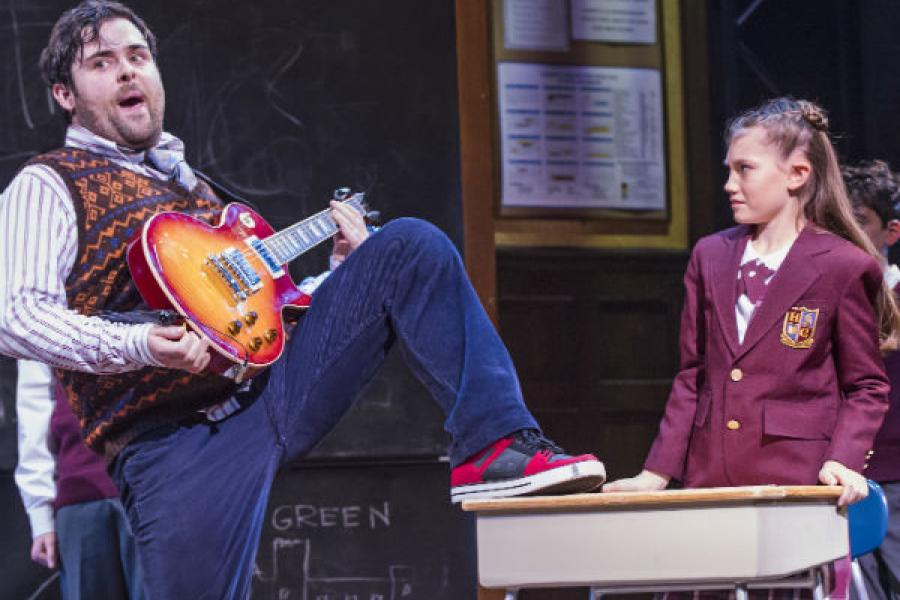 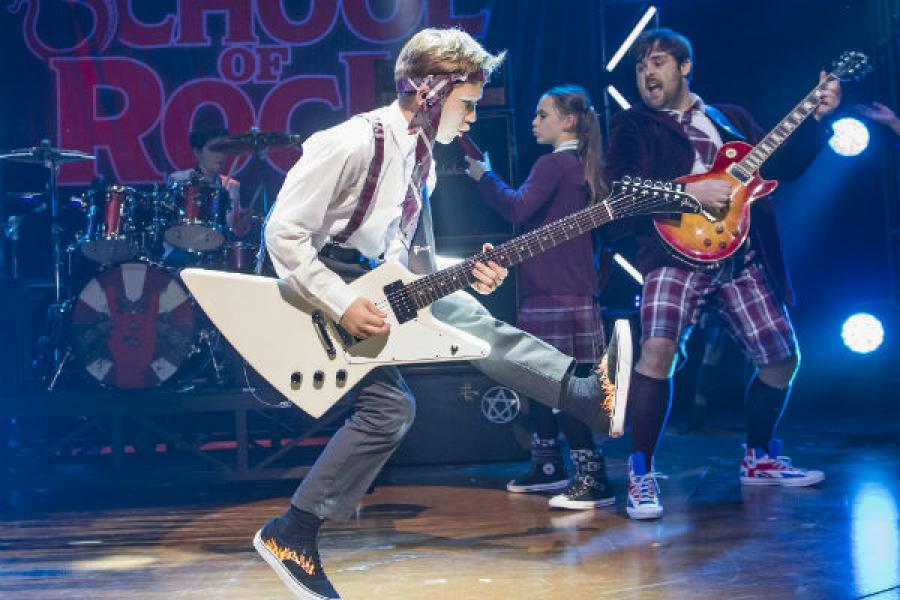 MY THEATRE MATES
Ian Foster: School of Rock is a cheerily appealing slice of musical theatre. And with a seemingly endless roll call of talented youngsters who, as we’re reminded, play their own instruments. 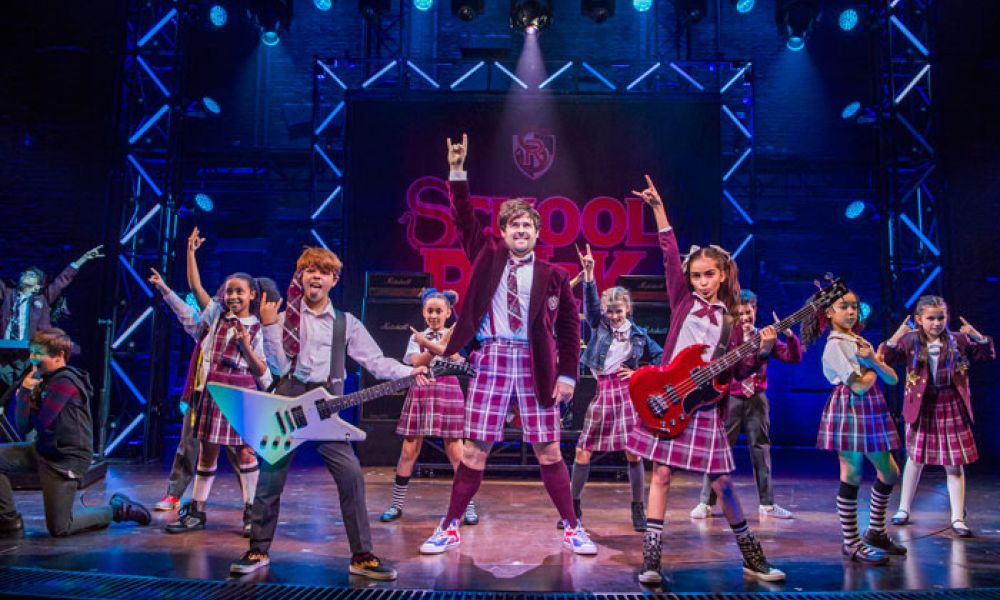 THE STAGE – ★★★★
Mark Shenton: Lloyd Webber goes back to his rock roots and produces his freshest musical in years… It’s not a show that takes itself too seriously, but it has a heartwarming message about the value of self-expression for children… This show has tons and tons of heart. 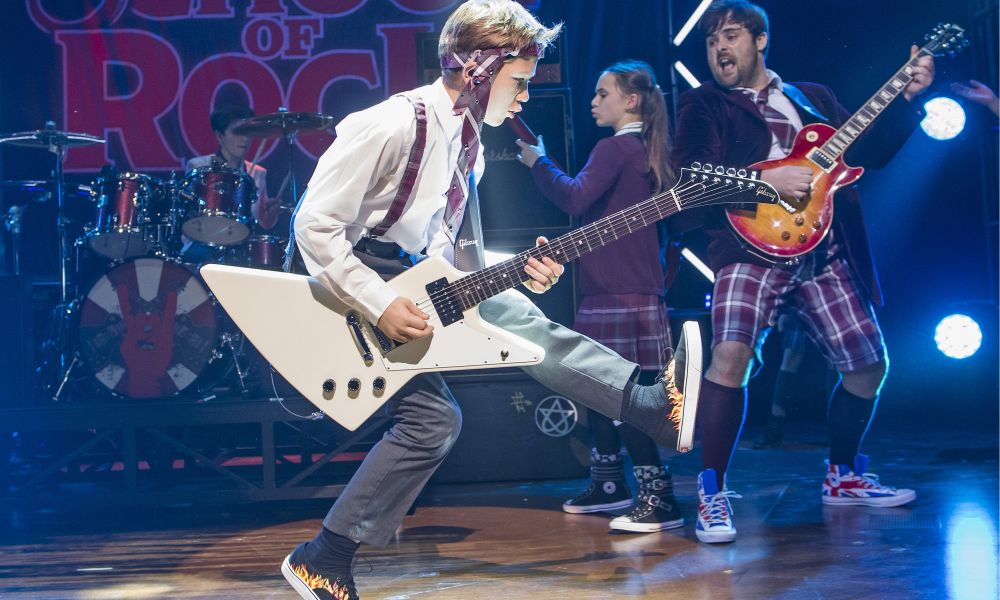 TIME OUT – ★★★
Andrzej Lukowski: It is the ultimate musical about male privilege, a show about an under-qualified, over-entitled white guy who shambles his way to public adoration by blithely inflicting his bankrupt baby boomer values upon a bunch of impressionable people who don’t know any better… It is the musical version of Donald Trump. But with much more likeable children. 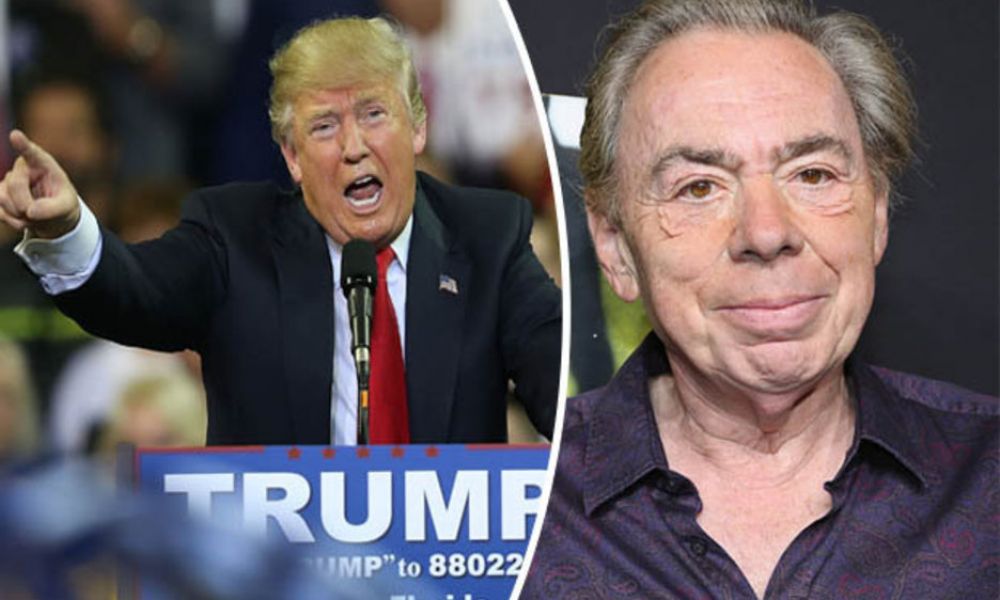 Lloyd Webber insisted Trump didn’t come to Broadway School of Rock
The composer asked him not to attend School of Rock so that he “didn’t upstage the children”. Lord Lloyd Webber has said he found Mr Trump’s comments during the election campaign… 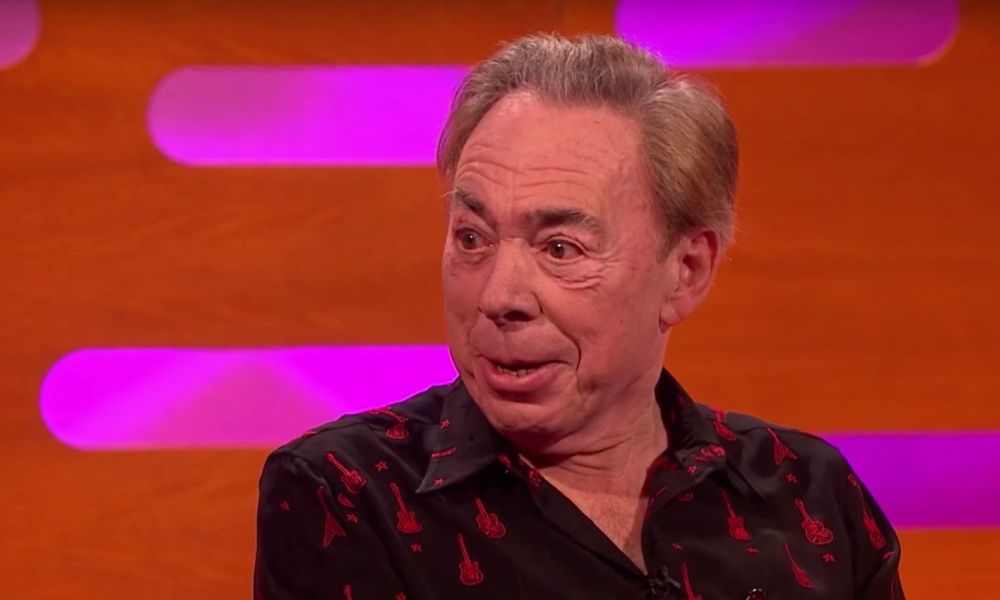 Lloyd Webber’s dreaming up Trump: The Musical (Lady & The Trump?)
Lord Andrew Lloyd Webber already has some decent ideas for turning Donald Trump’s historic (or horrifying) US presidential win into his next musical. The composer of The Phantom of the… 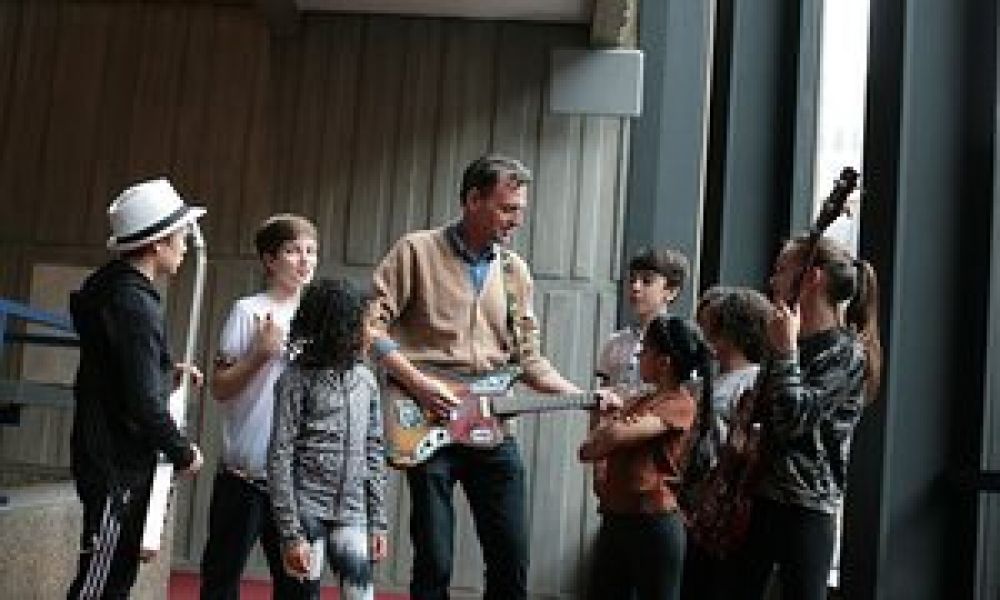 I’m with the band: jamming with the kids from School of Rock
Tim Dowling: “Sorry, can you just show me that again?” I say. “It basically starts on the seventh fret,” replies Jake Slack, 13. “On the G and B strings. Sometimes, I do it like this.” He’s off… 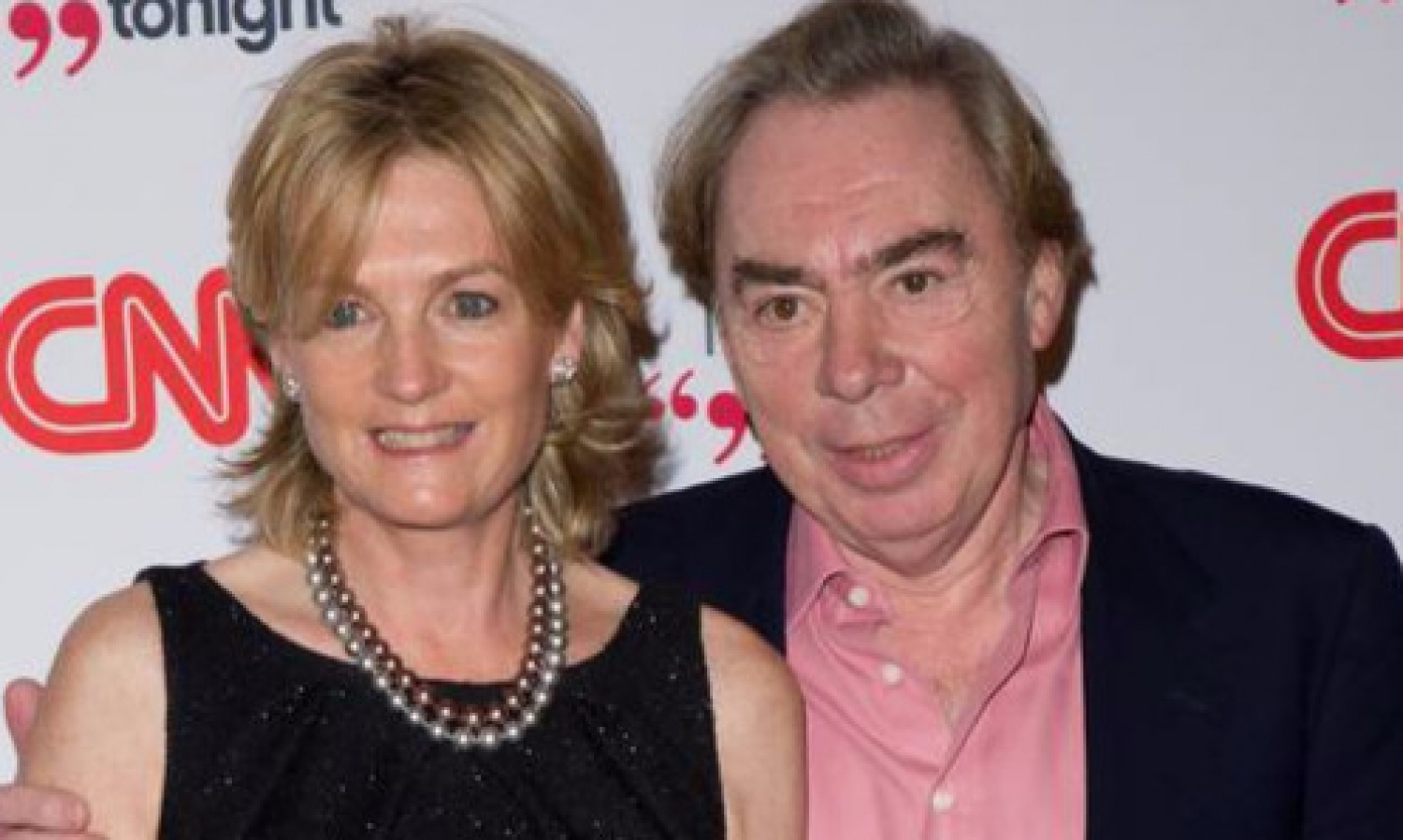 Lloyd Webber: ‘I’m the most boring person I’ve met’
Andrew Lloyd Webber was so taken with the voice of a girl in the bar of the Sandy Lane hotel in Barbados he turned to his companion and said: “This girl, she’s rather good…” His… 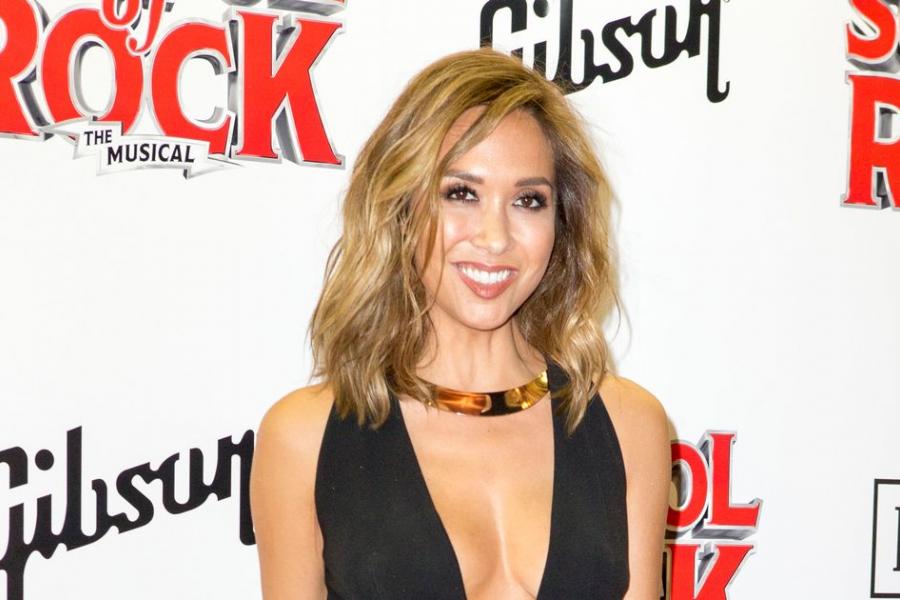 Myleene is all front in plunging jumpsuit at School of Rock
Myleene Klass never fails to impress when it comes to her glitzy wardrobe choices. The mum-of-two stopped by the press launch for Andrew Lloyd Webber’s latest musical – School of Rock -… 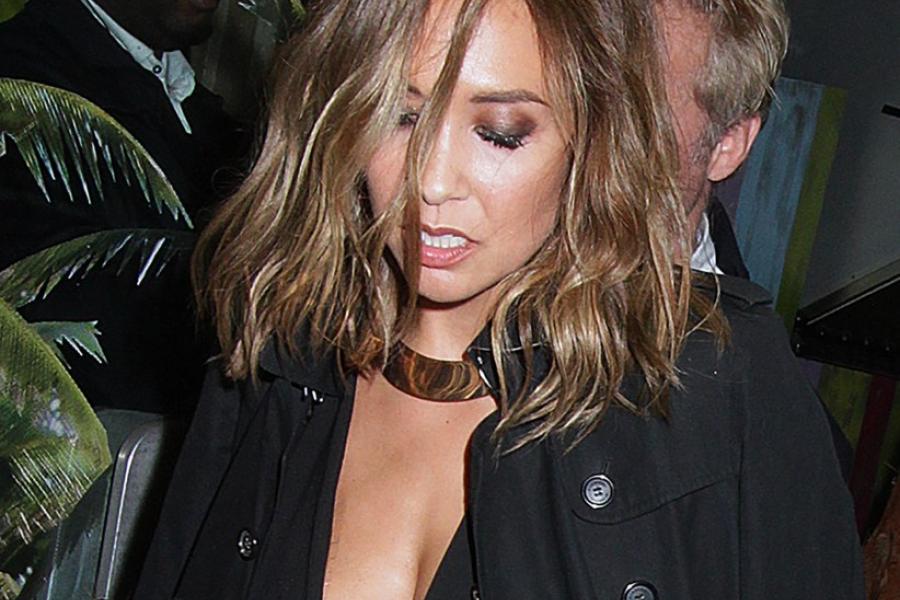 Myleene looks worse for wear, avoids wardrobe malfucntion
One too many? The TV presenter wore a plunging black jumpsuit for her night on the town Myleene Klass looked like she had one too many as she narrowly avoided a wardrobe malfunction after… 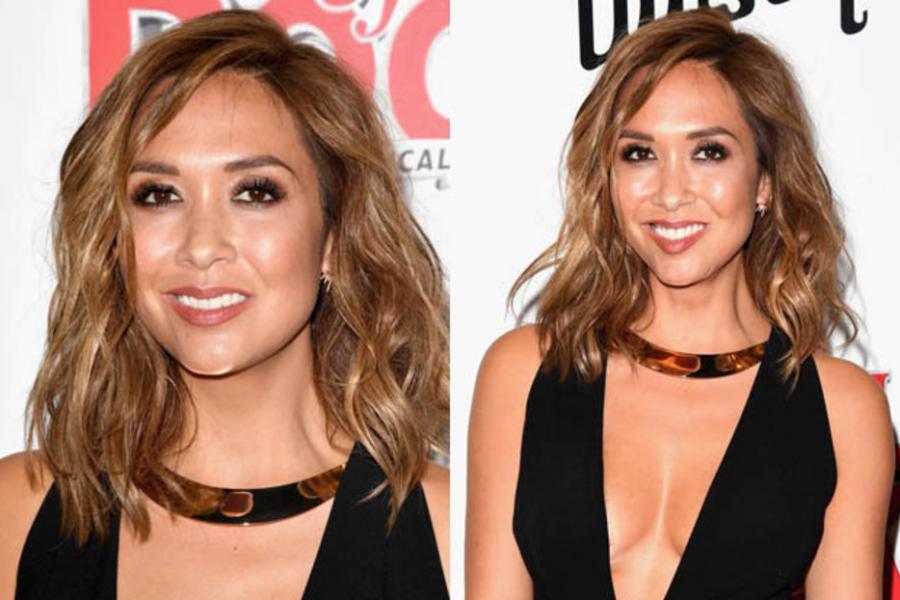 Taking the plunge: Myleene stuns as cleavage erupts
The latest series of I’m A Celebrity…Get Me Out Of Here! started this week, so she had to remind us of those famous shower scenes. Top marks Myleene, a boob tease will surely do the…