Press Pass: Everything you need to know about Alfie Boe & Katherine Jenkins in Carousel

Home-Press Pass: Everything you need to know about Alfie Boe & Katherine Jenkins in Carousel

Press Pass: Everything you need to know about Alfie Boe & Katherine Jenkins in Carousel 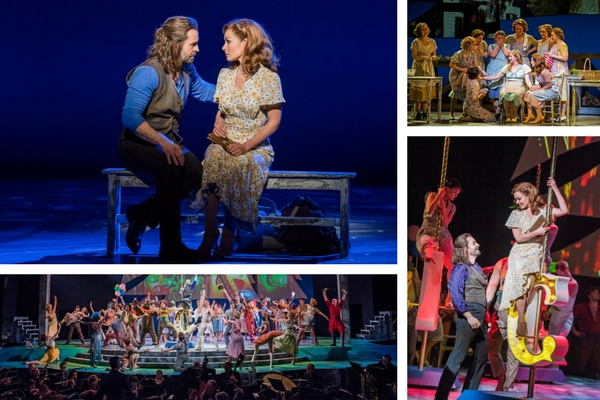 Carousel at the London Coliseum

As with the previous ENO musicals of the past two years, this production is produced by Michael Linnit and Michael Grade (who are also behind the current big-budget production of another Broadway classic, 42nd Street, just opened at the Theatre Royal Drury Lane) and directed by Lonny Price. And, whereas Sweeney had Bryn Terfel and Emma Thompson and Sunset (now on Broadway) had Glenn Close, Carousel boasts two more big names leading the cast: classical singers Alfie Boe and Katherine Jenkins, who are accompanied by ENO’s 40-piece orchestra and chorus.

In Rodgers & Hammerstein’s 1945 Broadway classic is a supernatural romantic musical, famously caught between heaven and earth. Fifteen years after getting caught up in an armed robbery and taking his own life, the charming carousel barker Billy Bigelow (Boe) gets a chance to return to earth and make amends. Discovering that his daughter Louise has grown into a lonely, troubled teenager, haunted by her father’s legacy, Billy vows to restore pride to his wronged wife Carrie Pipperidge (Jenkins) and family.

Carousel continues at the London Coliseum until 13 May 2017. 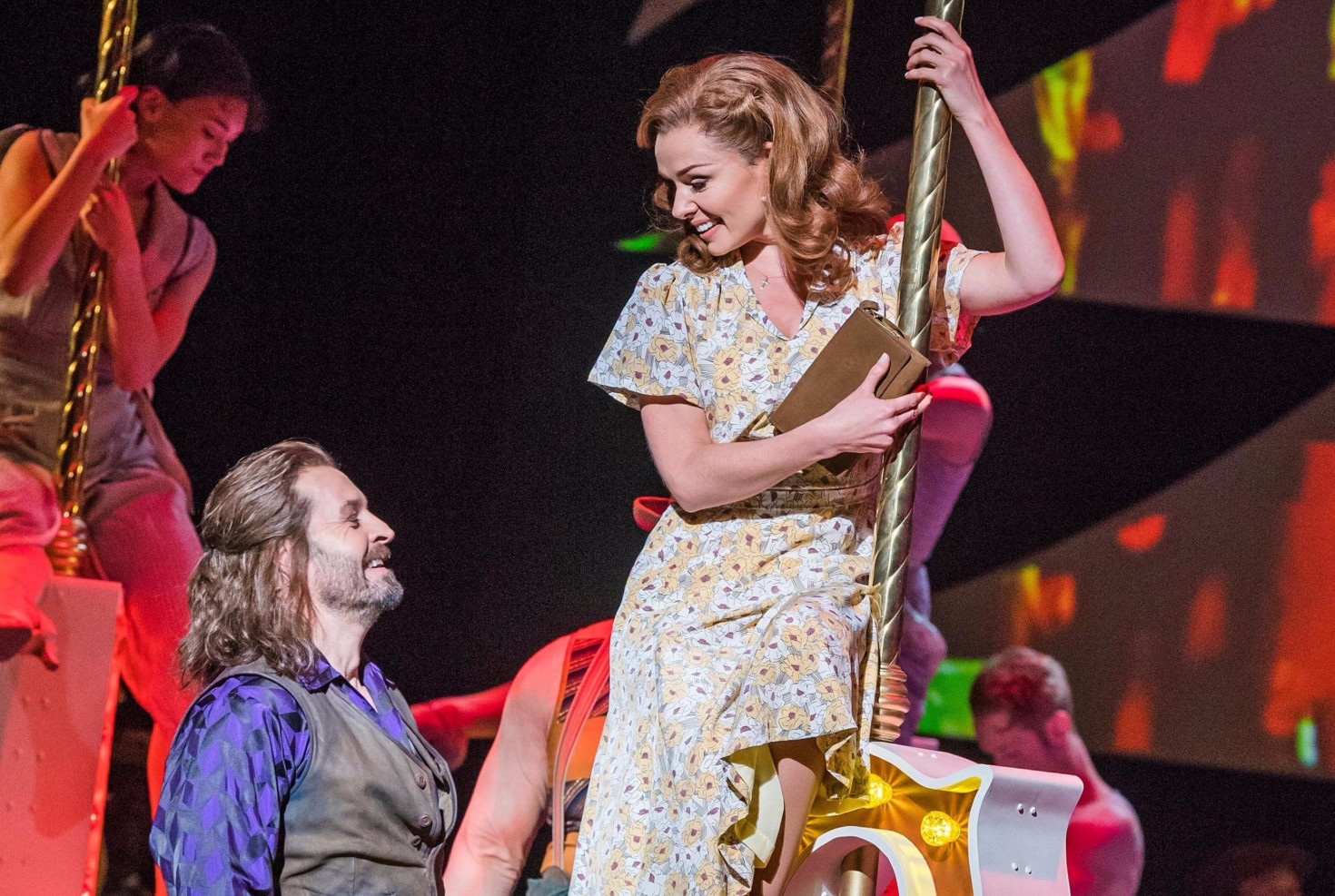 THE TIMES – ★★★★★
Ann Treneman: She can sing like an angel, she looks divine, but can Katherine Jenkins act? Well, after I spent almost three hours smiling, tapping my feet and shedding the odd tear through the Welsh classical crossover star’s stage debut — in one of the biggest theatres in the West End! In one of the best-loved musicals ever written! This is not a “soft opening” — I can report that, yes, yes she can. She impresses in a beguiling if uneven show in which it is co-star Alfie Boe whose full-monty operatic singing is shown up by his narrow acting range…  More than 70 years after it was first staged, this is a marvellously persuasive mix of the mainstream and the modernist. 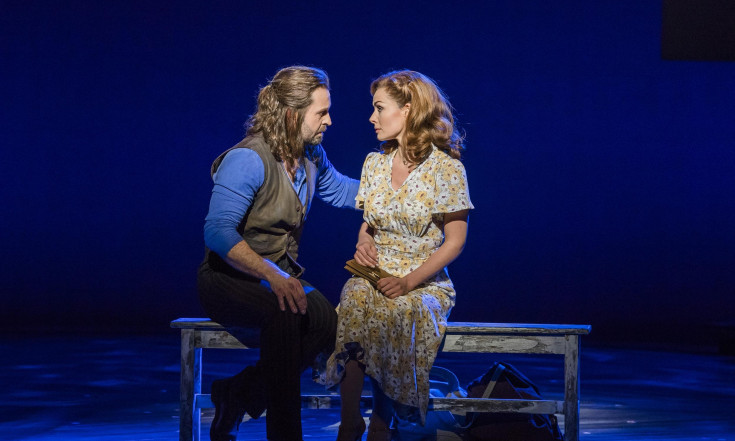 Henry Hitchings: Katherine Jenkins is demure and appealing as Julie Jordan, a poor millworker in coastal Maine. The part has limitations, but she’s plausible as a young woman seduced and then devastated by a reckless bad boy, and she sings ardently, albeit with a bit too much breathy vibrato. As Billy Bigelow, the volatile fairground barker, Alfie Boe is able to show off his pure and potent tenor voice. But his acting is stiff, and we get a limited sense of his character’s violent transformations… The story’s emotional complexities aren’t fully explored. When the characters sing, the show soars. A lot of the time, though, they’re not singing. 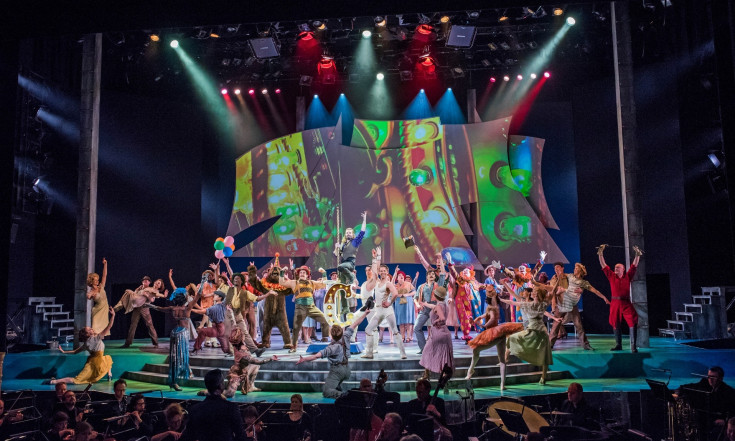 Mark Shenton: The ENO production is billed as a semi-staged version, but it might be more accurate to describe Lonny Price’s production as semi-acted. Boe and Jenkins seem at cross-purposes, and not just in the mismatched aspirations of the characters they are playing… The performances are mostly caricatures, with the exception of the delightful Alex Young and Gavin Spokes lending some individuality and humour and providing a necessary respite from the prevailing earnestness. By all means go to bask in the beautiful, ravishingly performed score again, but Carousel has seldom felt less affecting. 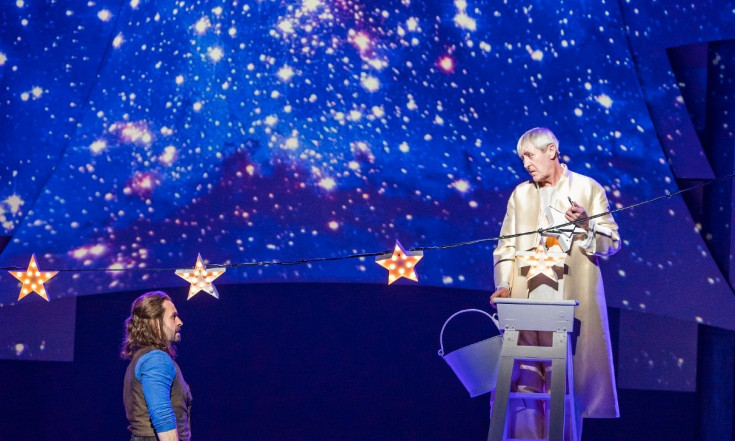 Andrzej Lukowski: Casting a lead actor who can’t act is perhaps an inevitable consequence of ENO’s annual series of ‘semi-staged’ musical revivals, designed to fill up the troubled company’s depleted coffers via unexpected big name casting… Despite having virtually never acted before, Jenkins is actually okay in a breathy, slight tragic-Monroe type way. Musical theatre regulars Alex Young and Gavin Spokes do a great job with sub plot leads Carrie and Enoch, and Nicholas Lyndhurst, of all people, is super in a late cameo as a whimsical celestial being, but they can only do so much with small roles. 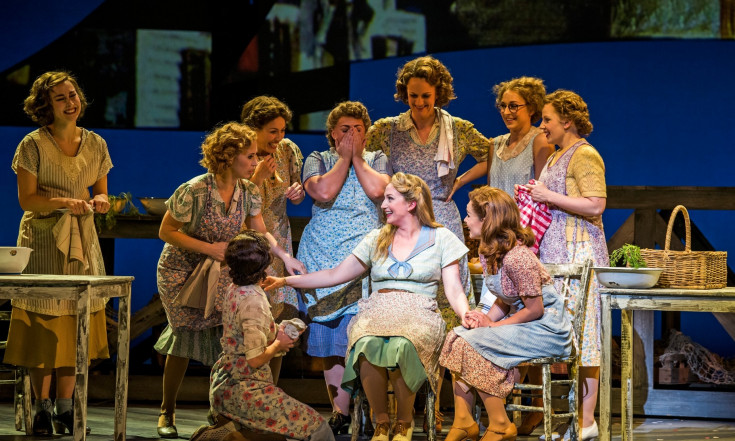 Nicky Sweetland: The musical, which was the writing partnership’s second Broadway hit show and purportedly their favourite, boasts possibly one of the most beautiful overtures ever written for theatre, and with the 40-piece ENO orchestra under the baton of David Charles Abell, is performed to its full and glorious potential. But the music is where this show is at its strongest, with Lonny Price’s production failing to add any depth to a musical that could be better described as semi-acted rather than as semi-staged. 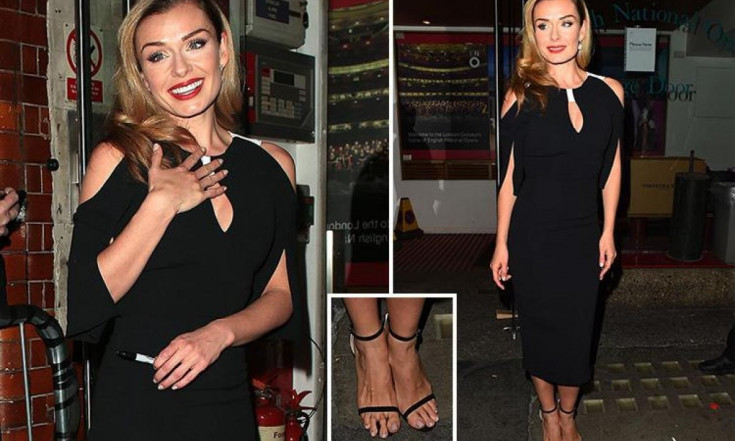 Katherine Jenkins sizzles in a LBD yet reveals her strange toes!

Dan Cain: Toe-tally stunning. Katherine Jenkins stunned in a classy black dress following a triumphant performance of Hammerstein & Rodgers’ Carousel. The Welsh beauty stepped out hand in hand with her handsome American husband Andrew Levitas, 39, in the stylish frock which boasted a teardrop chest and exposed her shoulders. 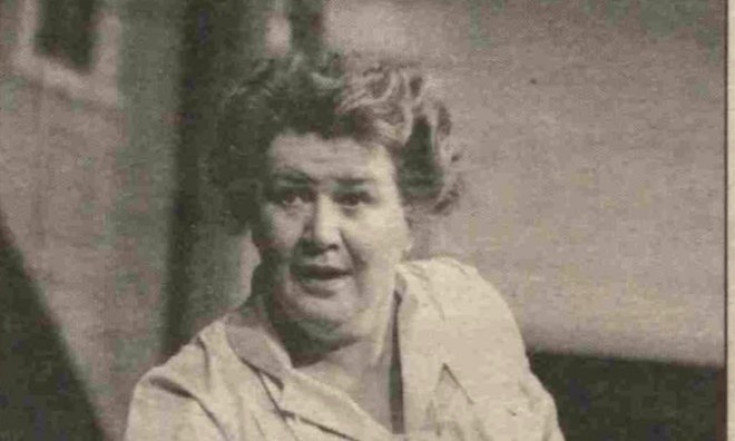 How Carousel turned into a whirlwind success
Al Senter: It was a task worthy of Hercules. How could Richard Rodgers and Oscar Hammerstein II repeat the phenomenal success of Oklahoma! in 1943? The critics had hailed the show as the coming of age of the American musical theatre in which book, music and lyrics were fully integrated in service of the narrative and the psychological make-up of the characters.

On my social media directory site, you can get full social media for Carousel and all of its cast, plus other great content including the following. 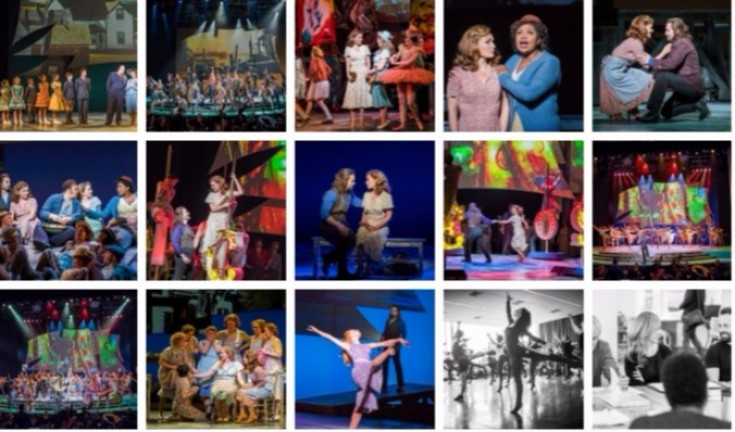 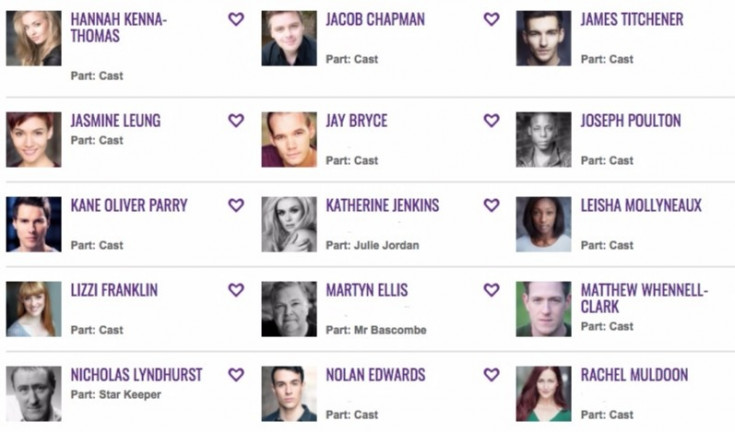