Press Pass: All the reviews (and #GameOfThrones pics) from Doctor Faustus opening

Home-Press Pass: All the reviews (and #GameOfThrones pics) from Doctor Faustus opening

Press Pass: All the reviews (and #GameOfThrones pics) from Doctor Faustus opening 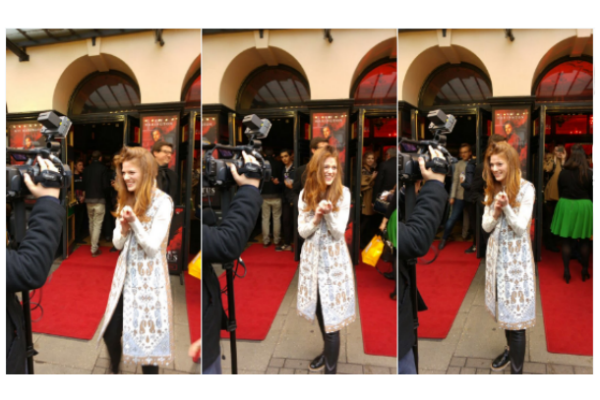 I shared some of my own thoughts about Jamie Lloyd‘s new production of Doctor Faustus – along with choice quotes (be they care of Christopher Marlowe or Colin Teevan) – last night. This morning’s other coverage following the star-studded opening night is, like the story itself, a mixture of heaven and hell.

While most critics found some praise for the lead performances by Kit Harington and Jenna Russell (as Mephistopheles), they were, by and large, less won over by Lloyd’s “cacophonous” production of Teevan’s “messy” modern mash-up. But there’s little doubt that Game of Thrones‘ fans won’t be disappointed their Jon Snow’s onstage revelations (particularly those of the flesh) or the presence of so many other Thrones stars in the well-papped gala coverage. It truly is a case of life imitating art imitating life. What would Marlowe have to say about that?

I’ve rounded up some of the key overnight reviews, news and features below. 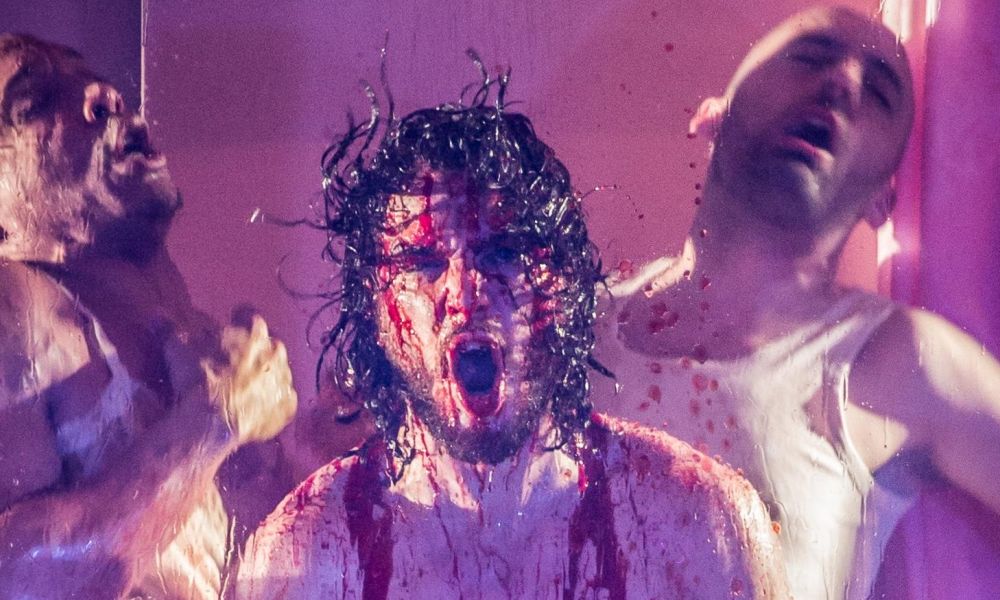 ★★★★ – THE TIMES
Ann Treneman: If the devil is in the detail, then he’s very much centre stage here. The director Jamie Lloyd has invested so much in the detail, not to mention the devil, that if he did not shock then he wouldn’t be happy…
Harington noticeably relaxes once he gets to Vegas where he emits rock star sex-god energy in a way that makes you think of Jim Morrison. He struggles a bit at the start with Marlowe’s language, but gets through it, helped immeasurably by Jenna Russell as Mephistopheles… It’s all wildly OTT but I must admit that I rather liked it. 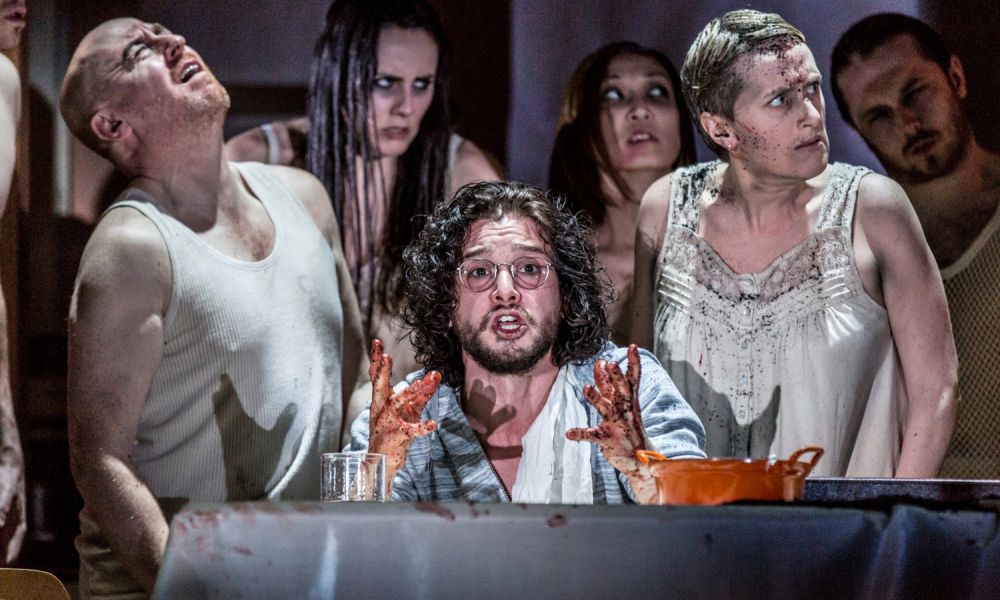 ★★ – EVENING STANDARD
Henry Hitchings: Harington is agile and energetic in this unapologetically messy take on Marlowe’s classic play. He doesn’t always make perfect sense of the passionate Elizabethan verse, but he has an undeniable presence… Lloyd and Teevan are astute about today’s slavish fixation with celebrity, yet the result feels like an exercise in bombarding us with toxic images. Harington’s fans will savour his performance’s mercurial physicality. But for fans of the original Doctor Faustus, it’ll seem to be a case of less Marlowe and more Marloverkill. 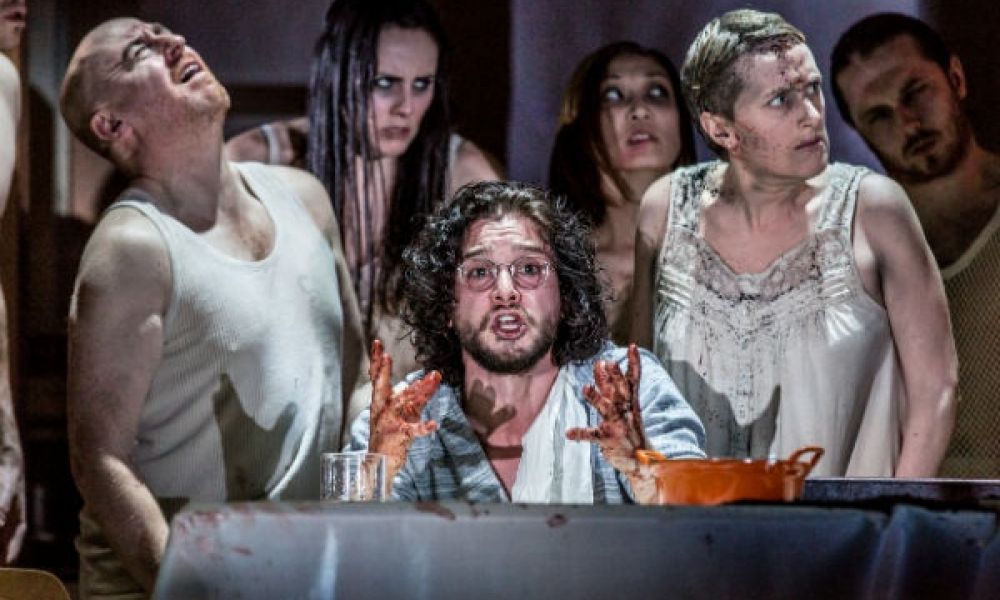 ★★ – TELEGRAPH
Dominic Cavendish: The Game of Thrones star looks great in this Marlowe revival, but his delivery is stubbornly earthbound, and the production verges on being totally incomprehensible… There’s nothing intrinsically wrong with this sort of star-driven “event” theatre (how neatly apt too that the actor was named after “Kit” Marlowe by his folks). But alas there’s little that’s intrinsically right about Jamie Lloyd’s revival. 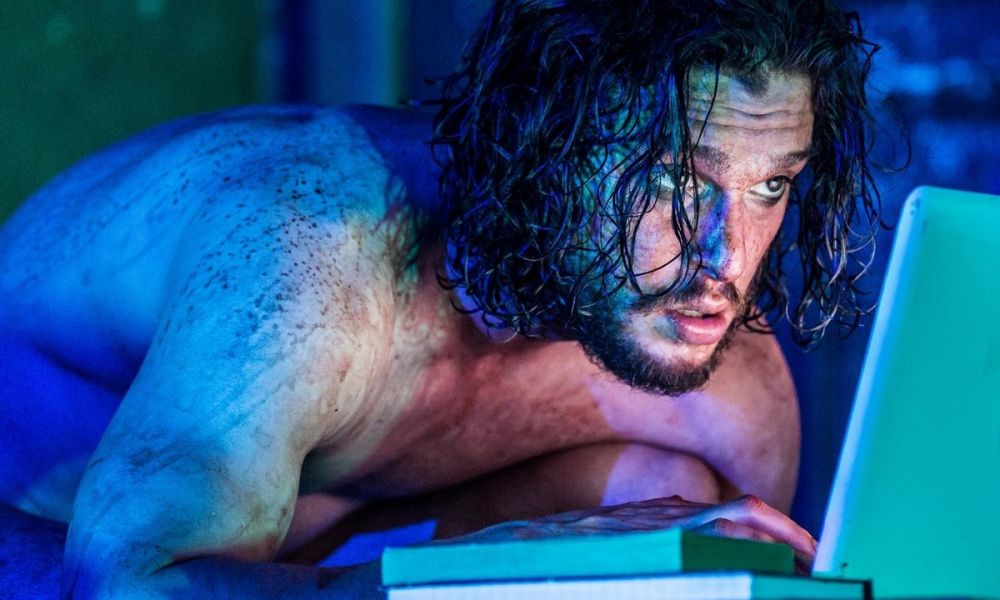 ★★ – GUARDIAN
Michael Billington: The Game of Thrones actor gives us a sense of the scholar’s flailing despair but Jamie Lloyd’s excessive version of the tragedy comes with a trite message… Marlowe’s play was once said to consist of “a beginning, a muddle and an end”. But Colin Teevan’s adaptation, which totally rewrites the farcical central acts, only compounds the confusion and Jamie Lloyd’s production seems based on the idea that nothing succeeds like excess 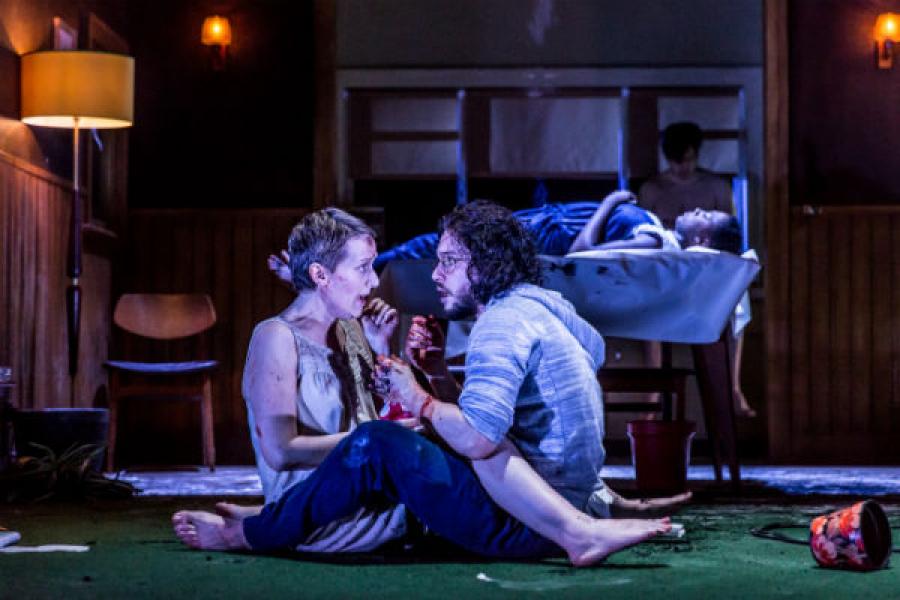 ★★ – THE ARTS DESK
Marianka Swain: Harington more convincingly conveys the physical effects of Faustus’s 24-year excess than his spiritual and existential crisis, outclassed in the latter by Russell’s fallen angel. Weary, matter-of-fact, trudging around in her voluminous nightie, she’s tormented by the absence of hope… Despite the horror film shocks and liberal blood budget, it’s never really scary, nor as tragic as it should be. Commendably accessible, but verging on soulless. 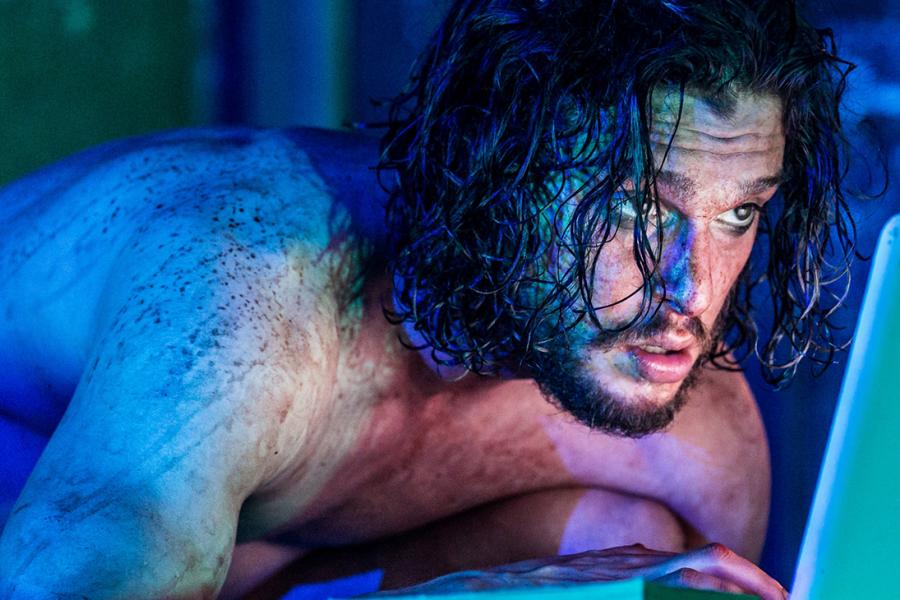 HOLLYWOOD REPORTER
Leslie Felperin: Harington has grace and presence, and in such an overwhelmingly physical piece of theater, that counts for a lot… Sneering at celebrity worship feels like pandering to the theater crowd’s smuggest sense of superiority. It’s perhaps also an act of bad faith, given that the whole show is happily exploiting the fame of its star performer. 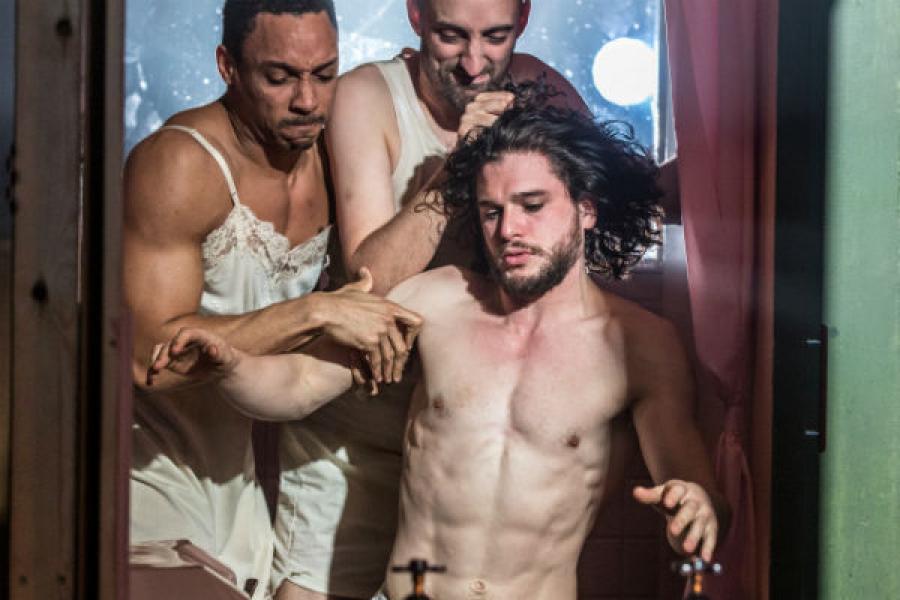 VARIETY
Matt Trueman: Must theatre sell its soul for new audiences? Director Jamie Lloyd has made it his mission to bring a new generation into theatre, but at what price? Canny casting pulls in a young crowd; flashy productions send them out breathlessly excited. The flip side is superficiality, and his Doctor Faustus, starring Kit Harington of Game of Thrones, is nothing if not that. 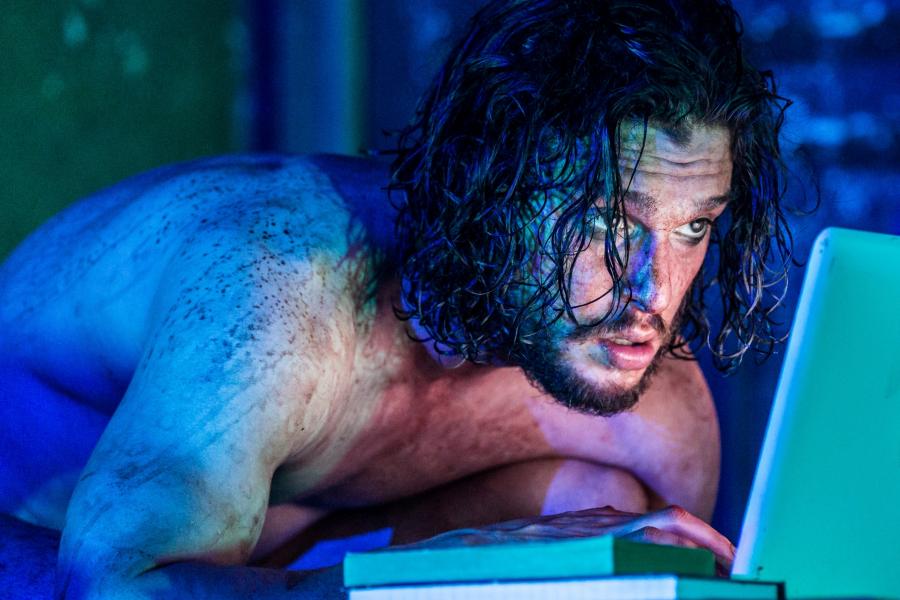 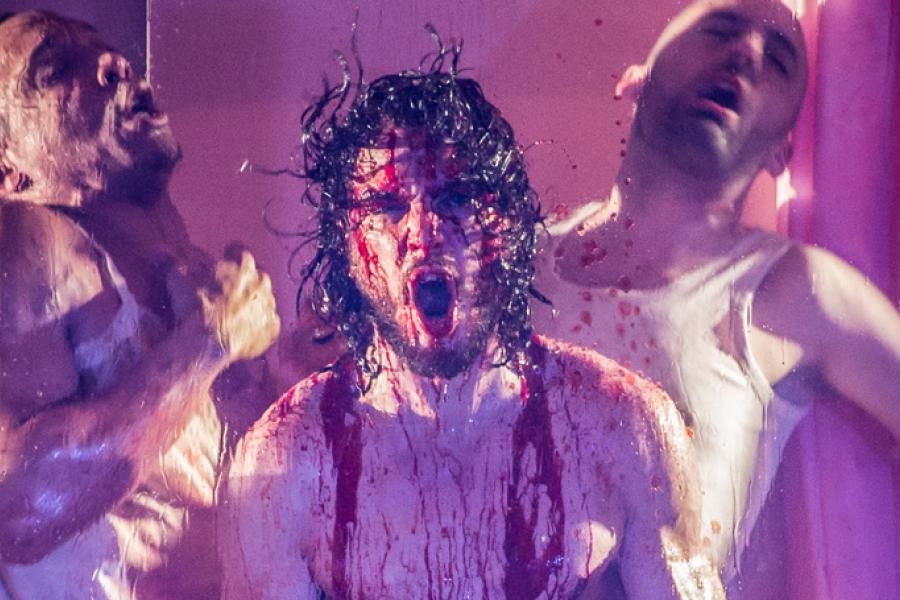 ★★★ – THE STAGE
Natasha Tripney: Brash, bold, and very messy modern mash-up of Marlowe… By all things holy, this is a very busy production; it’s cacophonous and fidgety, occasionally ingenious, often absurd. It never shuts up…  Amid all this Harington is nothing if not game. He drools and moons. He spends a lot of time on stage in his pants. 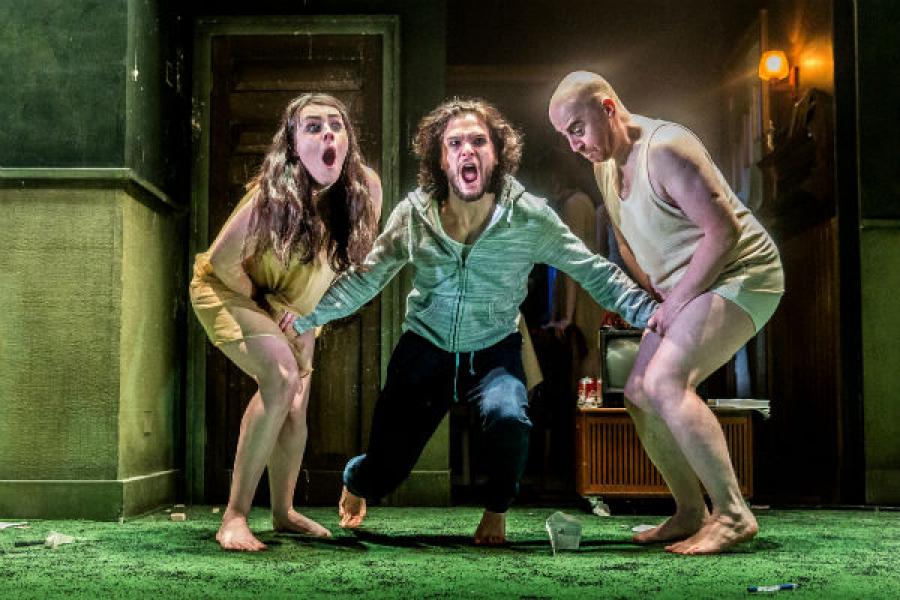 HUFFINGTON POST
Jessie Thompson: Jamie Lloyd’s Doctor Faustus is absurdly showy, flamboyant, always daring itself on to do something even more outrageous. What a show to see if all you had on your agenda was popping down to see Kit Harington in his boxers… It’s a thrilling evening, full of fun and silliness, darkness and anarchy. 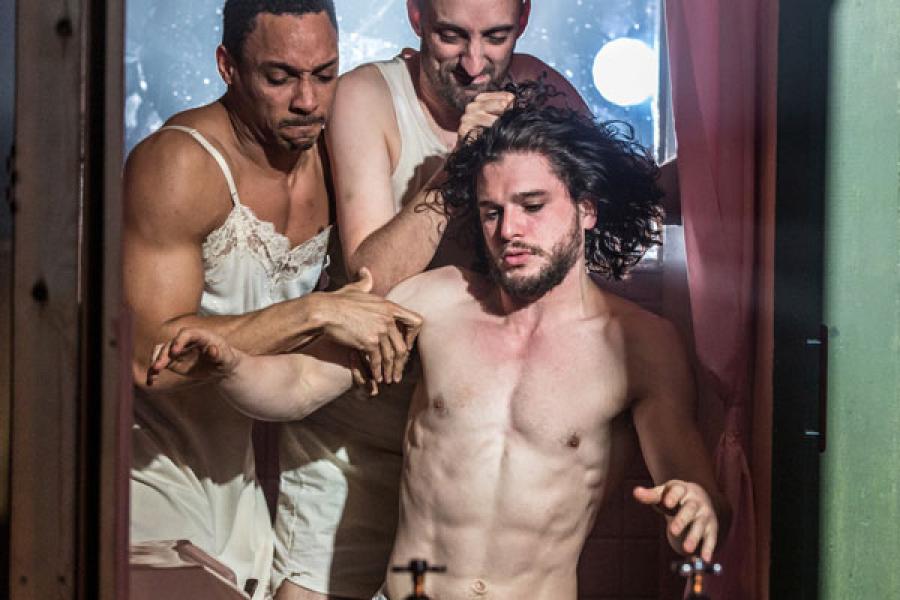 ★★ – BRITISH THEATRE
Danny Coleman-Cooke: Harington is brilliantly conflicted in the title role, making the most of an often laboured script. It is an emotionally and physically demanding performance and Harington crosses effortlessly from 16th century to modern dialogue. 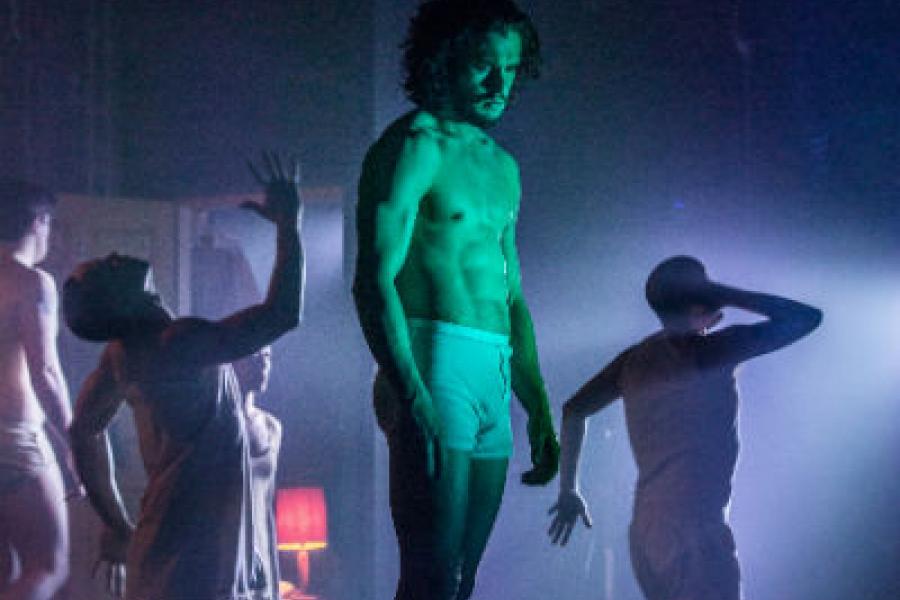 BROADWAYWORLD
Laura Jones: Harington is able to command the audience’s attention, particularly in the second act when things start to unravel… Doctor Faustus is vulgar, grotesque, sexually charged and shocking and although it promises an awful lot, it doesn’t necessarily deliver. 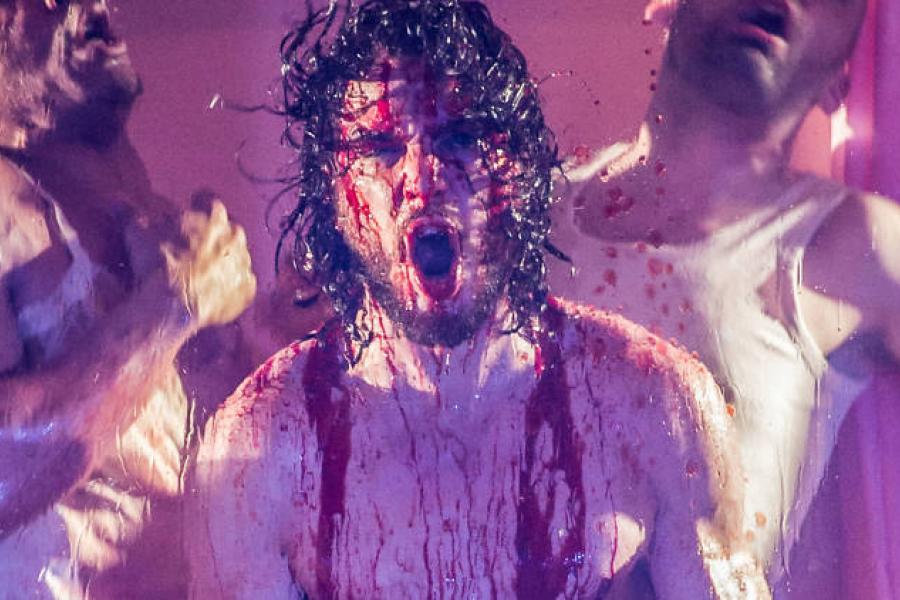 A YOUNGER THEATRE
Camilla Gurtler: Harington enters the world of Faustus leaving all traces of Game of Thrones heroism behind. He drives the play with a passionate hunger for fulfilment, played with incredible intensity, though his verse seems a little too formal. 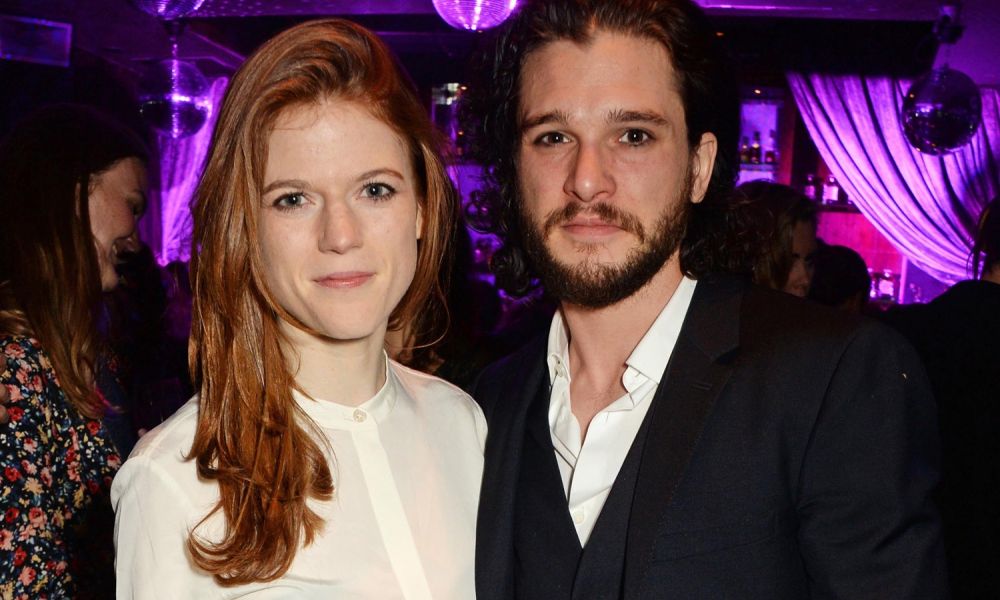 Harington celebrates Faustus performance with Rose Leslie and Game of Thrones fans
Emma Powell: Rose Leslie stepped out to support her boyfriend Kit Harington as he took to the stage for the gala night performance of Doctor Faustus. Harington was all smiles as he cosied up… 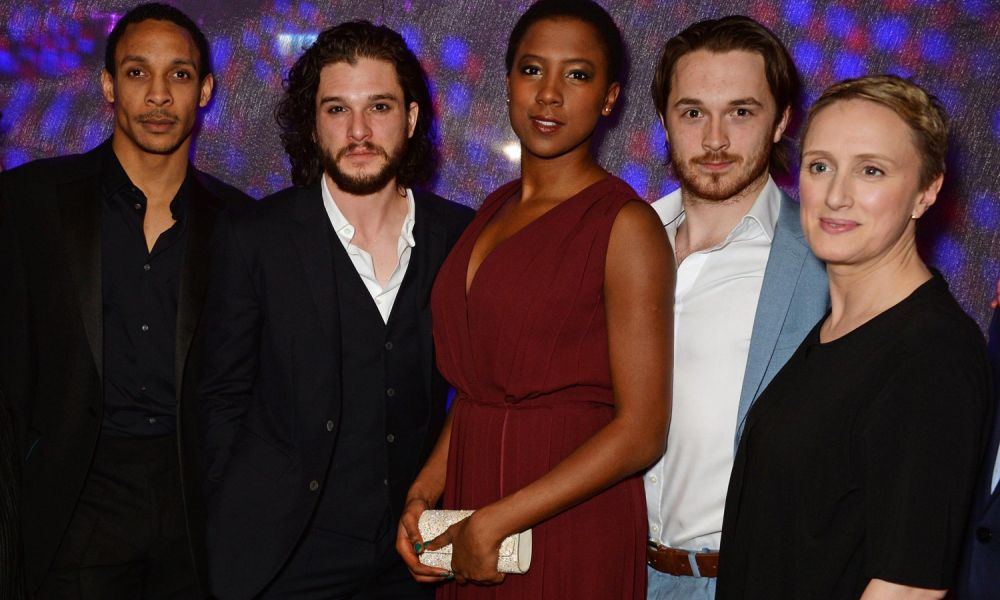 Doctor Faustus star Kit Harington: Now I can watch new Game of Thrones
Robert Dex: Kit Harington plans to celebrate his West End success in Doctor Faustus by doing what millions of his fans have already done – watching the first episode of the latest series of Game Of Thrones… 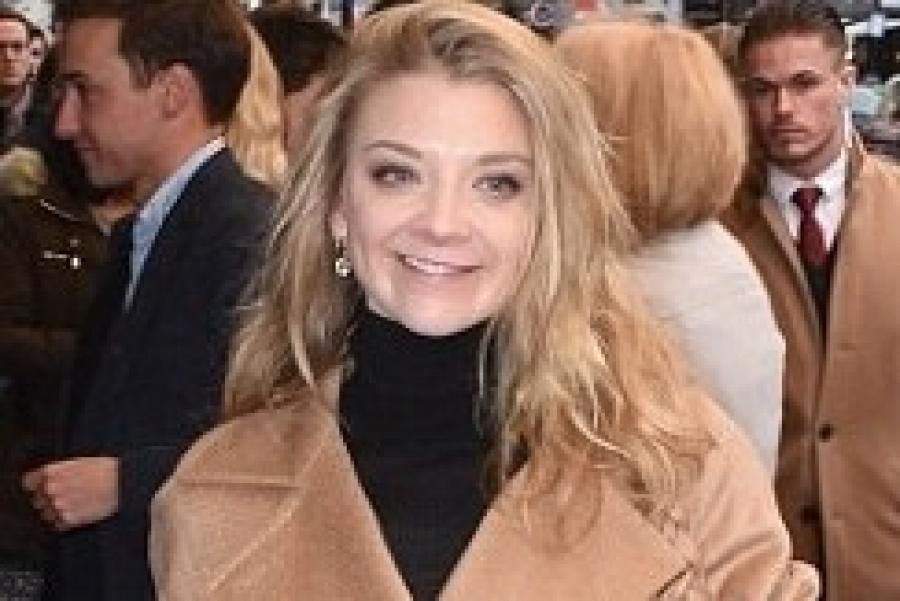 Natalie Dormer and Alfie Allen support Kit Harington in London
Nola Ojomu: Game of Thrones fans in the UK will be tuning in the season six premiere on Monday night to finally learn John Snow’s fate. But two of the show’s stars were seen supporting Kit Harrington… 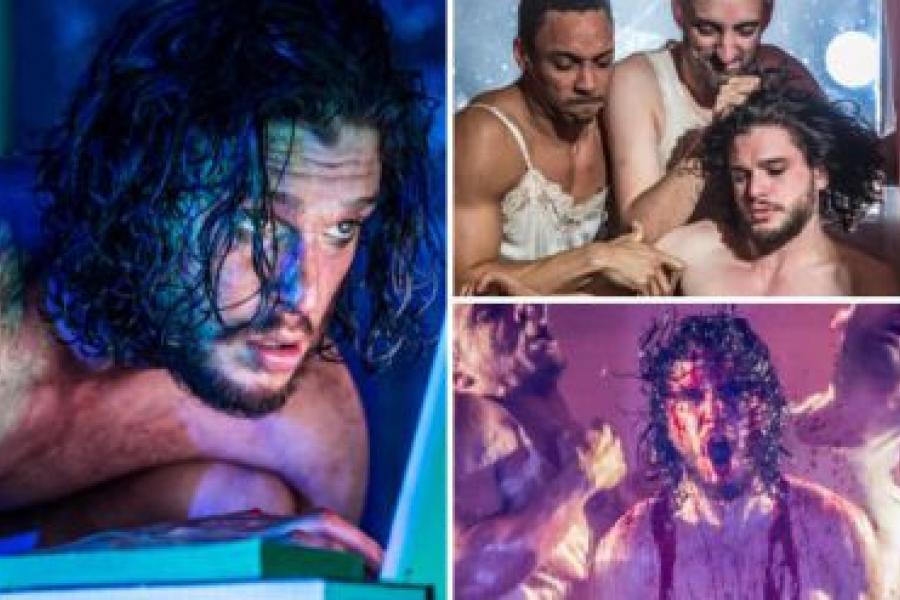 New photos of Kit Harington as Faustus released on opening night
Jack Hardwick: Game Of Thrones star Kit Harington looks unrecognisable in these brand new photos from his new play Doctor Faustus, which celebrated its gala night on Monday. Kit was joined by a host of… 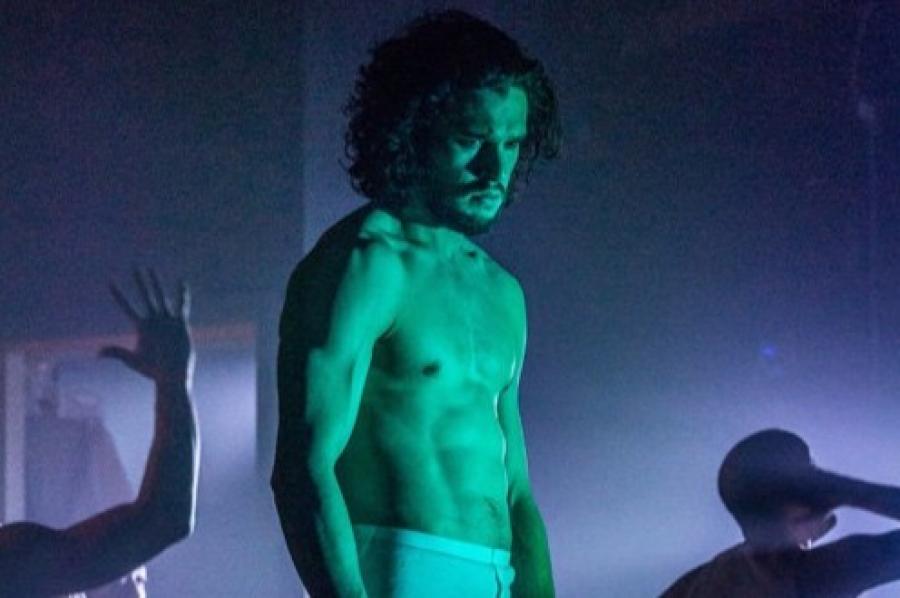 Getting his Kit off: Game Of Thrones star bares all for theatre fans
Marc Brenner: The 29-year-old actor takes the lead in Elizabethan classic Doctor Faustus at the Duke of York’s Theatre. Telling the story of a man who makes a deal with the Devil by… 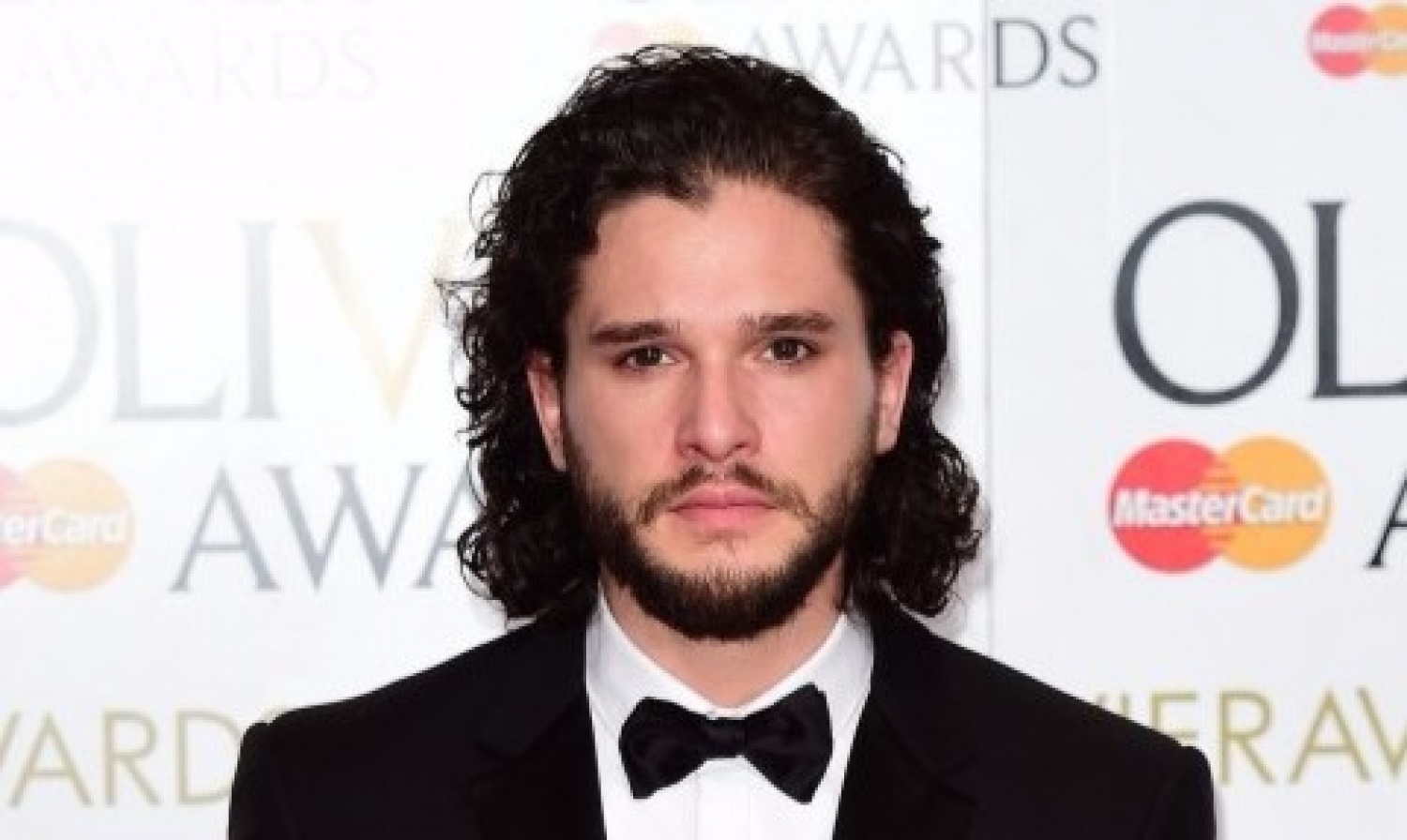 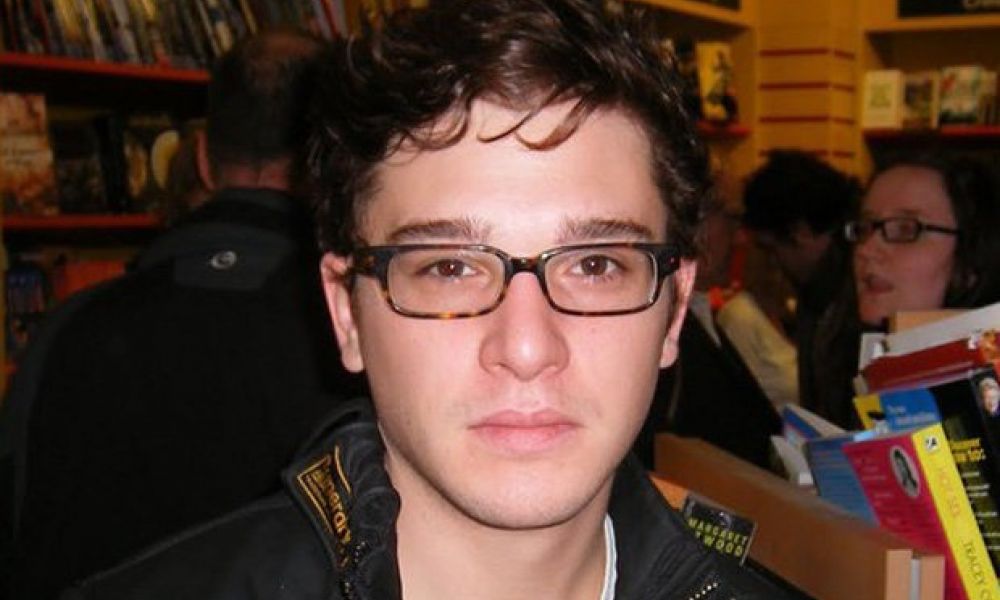 Geek to hunk: You will never guess who this lad grew up to be (I think we CAN guess…)
Jack Hardwick: Jon Snow actor Kit Harington has pulled off a dramatic image overhaul, going from fresh-faced geek to outright sex symbol. Opting to ditch his glasses and grow a trendy beard, the star…