Press pass: All the Aladdin reviews, the biggest star on the purple carpet + show trailer

Press pass: All the Aladdin reviews, the biggest star on the purple carpet + show trailer 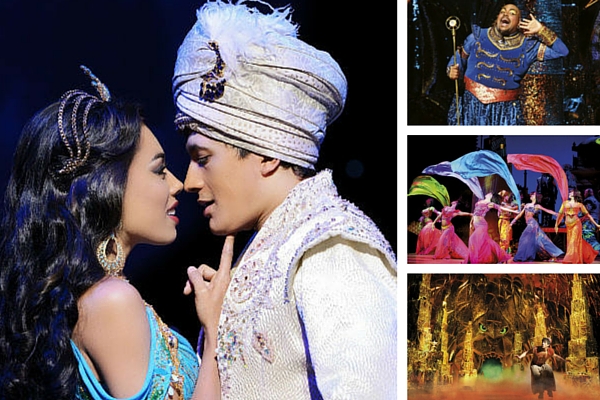 The first-night bookers could never have imagined that the timing of Aladdin‘s West End opening could feel so incongruous with what’s happening in the real world. For producers Disney themselves, it’s been a week of sadness and horror: a boy killed by an alligator at their resort in Orlando, Florida, where, of course, 49 other victims lost their lives in one of America’s worst mass shootings in a homophobic, terrorist attack on a gay nightclub.

One of the previews attended by critics coincided with this week’s Soho Vigil, when the streets outside the Prince Edward Theatre filled with people showing solidarity with Orlando’s LGBT victims. Quentin Letts noted this in his Daily Mail review: “On Monday night, when I saw [the show], the streets outside were packed for a moving tribute to the dead of Orlando. Seldom has a musical felt more detached from reality.”

“Seldom has a musical felt more detached from reality.”

Meanwhile, the UK is being torn apart by the EU referendum, football fans are wreaking havoc in France and Donald Trump is… well, Donald Trump. Maybe, after all, it’s perfect timing – we all need a fairy-tale escape from this reality.

And, judging by the overnight reviews, and despite the inevitable pantomime associations for British audiences, the Disney-scale spectacle has worked its magic on most critics. Here’s a round-up of reviews published this morning.

There’s also a dash of purple carpet glamour, with one very special guest in particular: title star Dean John-Wilson‘s girlfriend, also known as Cynthia Erivo. Last night’s opening comes just four days after she scooped the Tony Award for Best Actress in a Musical for her Broadway debut in The Color Purple. Now there’s a happy bit of timing.

Aladdin is at the West End’s Prince Edward Theatre. 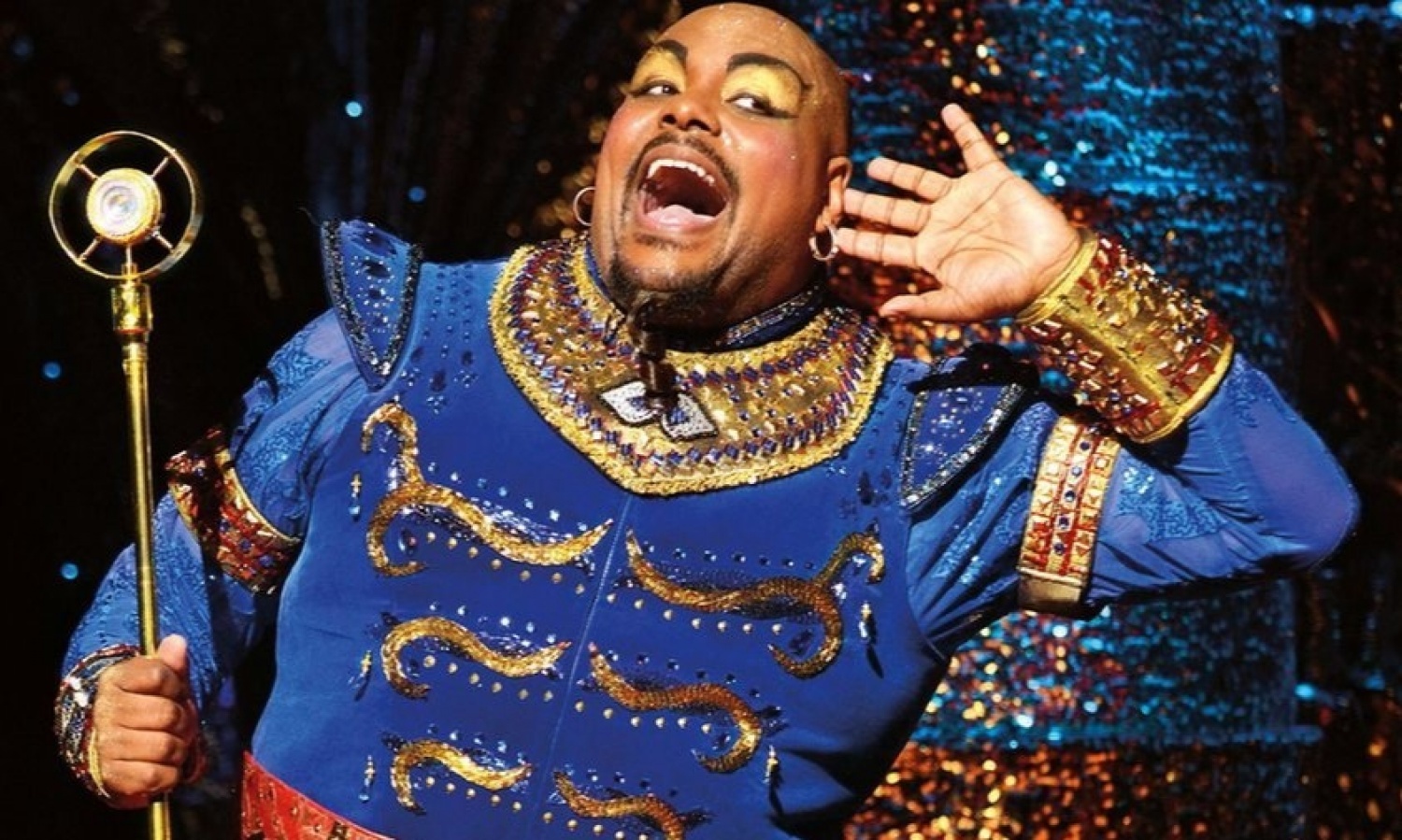 ★★★★ – GUARDIAN
Michael Billington: Imagine a Christmas panto minus the dame and with a budget of zillions and you get some idea of this musical extravaganza. At first, I resisted the corporate zeal corporate zeal…but I gradually found myself won over by the blend of spectacle, illusion and a greater supply of corn than you will find in the Kansas wheatfields. 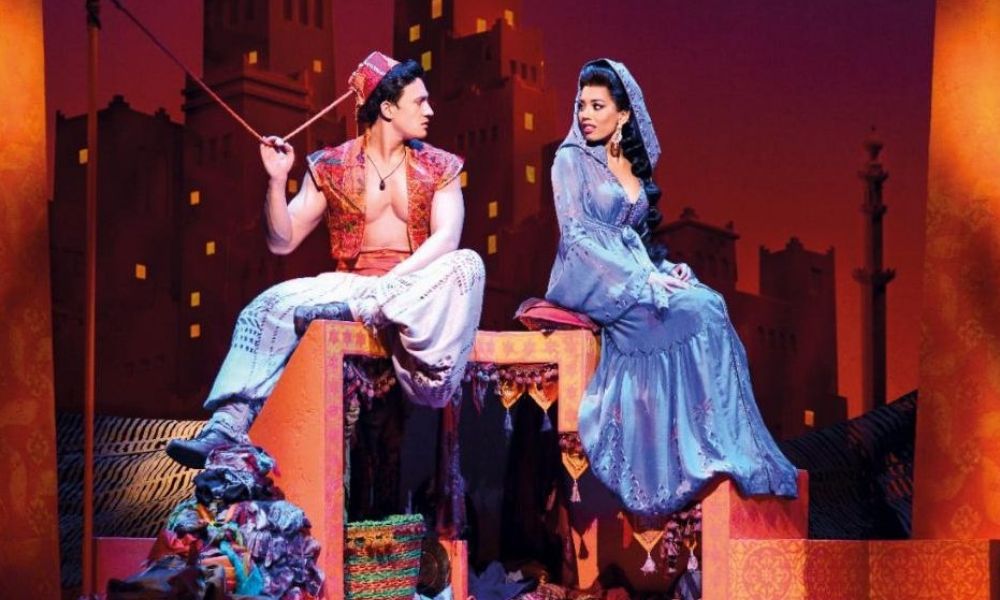 ★★★ – TELEGRAPH
Dominic Cavendish: It’s an odd sort of family entertainment that makes a parent heartily glad he didn’t bring his kids along for the ride… For all the visual splendour, spry, yearning-filled lyrics and syrupy sounds, it barely rises above the generic; a cynic’s idea of Disney “magic” at its blandest… You don’t need to be a patriotic nut to miss old Widow Twankey, Wishy-Washy and the time-honoured British slant on this tale.

★★★ – DAILY MAIL
Quentin Letts: Panto season has begun early this year with the arrival of Aladdin in the West End.
It’s only June but we already have lamp-rubbing, pops of smoke, plasticky romance and a magic carpet (more a magic mattress) which floats around like a flying saucer… It’s Disney, not Chekhov. It’s pink and white, with little between. It’s cynical, saleable, palpable pap and I suspect it will make a fortune. 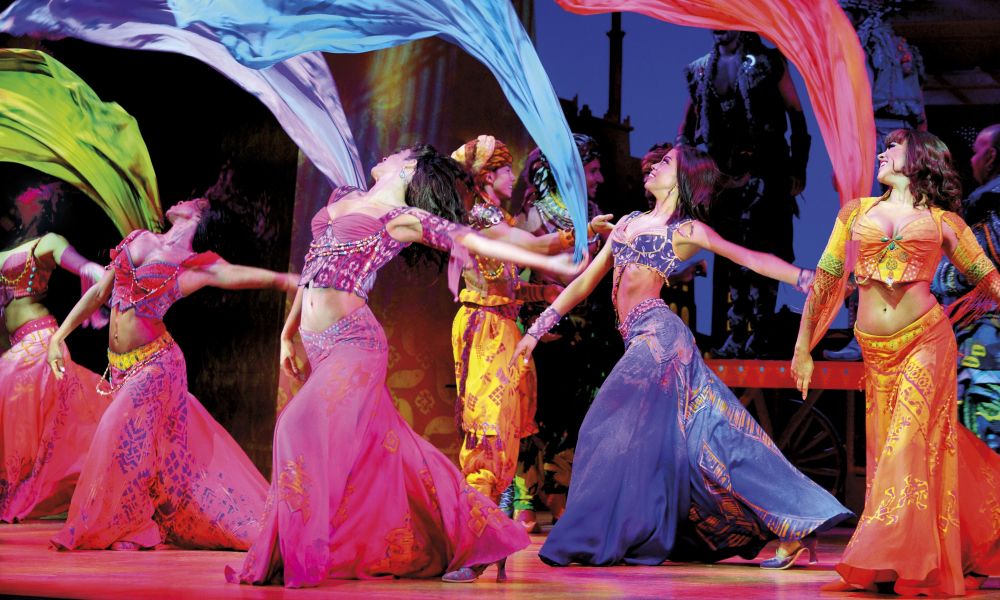 ★★★★ – TIMES
Ann Treneman: It’s not so much a musical as a spectacle. As we waited beforehand, I stood next to a little girl who was wearing a Princess Jasmine costume. Respect… Trevor Dion Nicholas, larger than life, all smiles and showbiz, is a genius genie. He appears in a plume of smoke, a spiral twirl delivering him on stage. His costumes are beyond your wildest imaginations of what glitter can do. 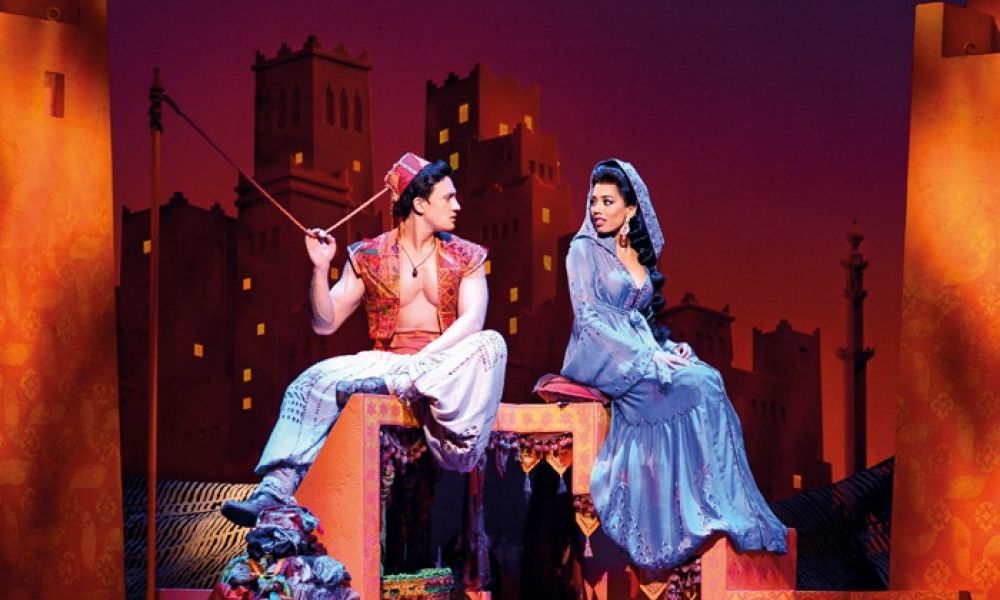 ★★★★ – THE STAGE
Mark Shenton: Family musical of class, wit and invention – a sure-fire West End hit… Alan Menken’s irresistibly tuneful score, with lyrics by the late Howard Ashman and Tim Rice, is beautifully rendered under the musical direction of Alan Williams, and director and choreographer Casey Nicholaw takes it all home with a staging that nails every number with brilliant showmanship. 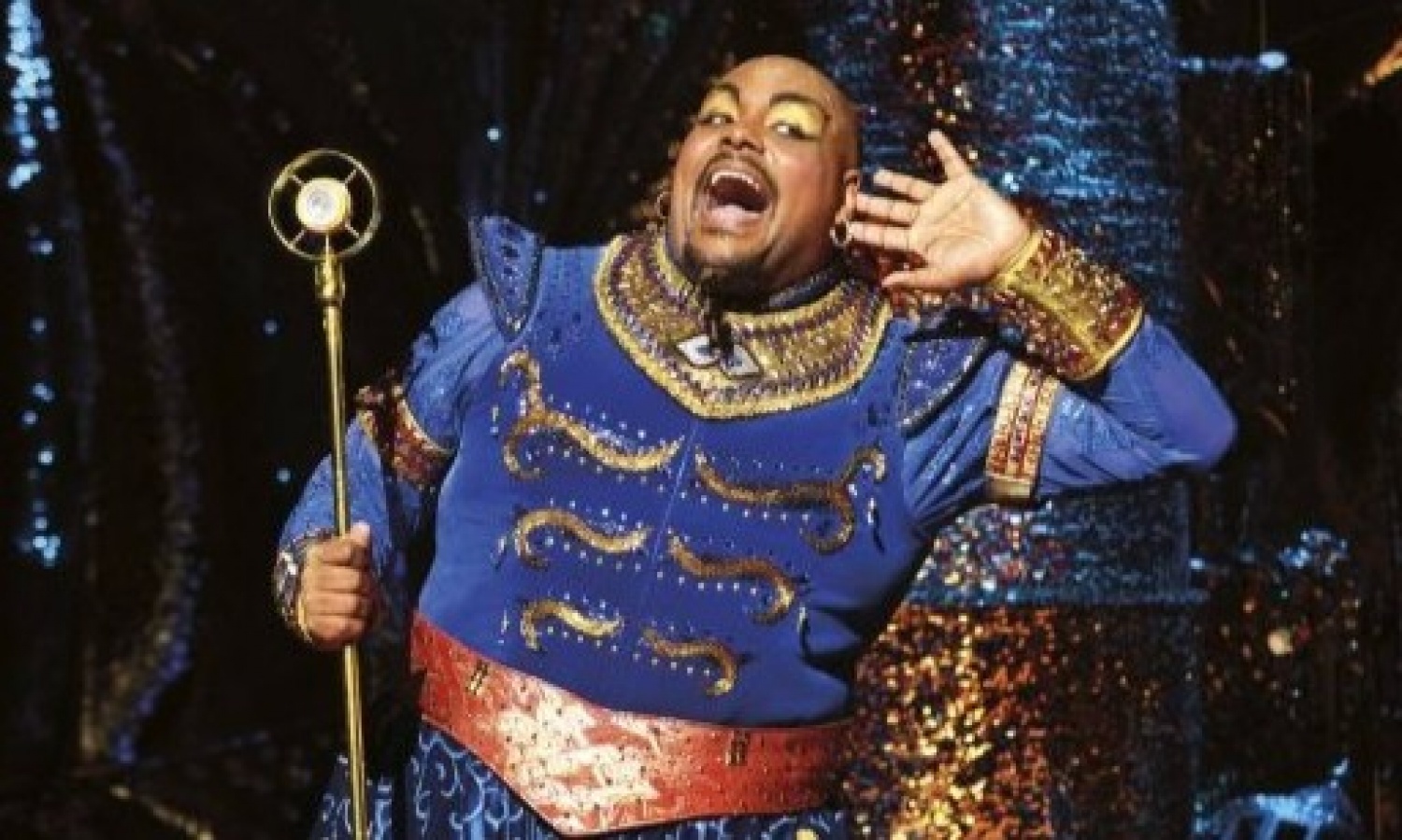 ARTS DESK
Edward Seckerson: Granted, Aladdin offers “a whole new world” of possibilities (as per the title of its most famous number), but its slim pickings, musically speaking…I took home one lovely song – Aladdin’s solo “Proud of Your Boy” – which Menken wrote with his long-term partner, the late Howard Ashman, and has restored for the stage version. But that’s about it: beneath the cosmetics, there’s precious little else to savour.

Various on MY THEATRE MATES
Multiples Mates’ views and reviews of the show, including from Caroline Hanks-Farmer and Emma Clarendon, plus production photos and news… 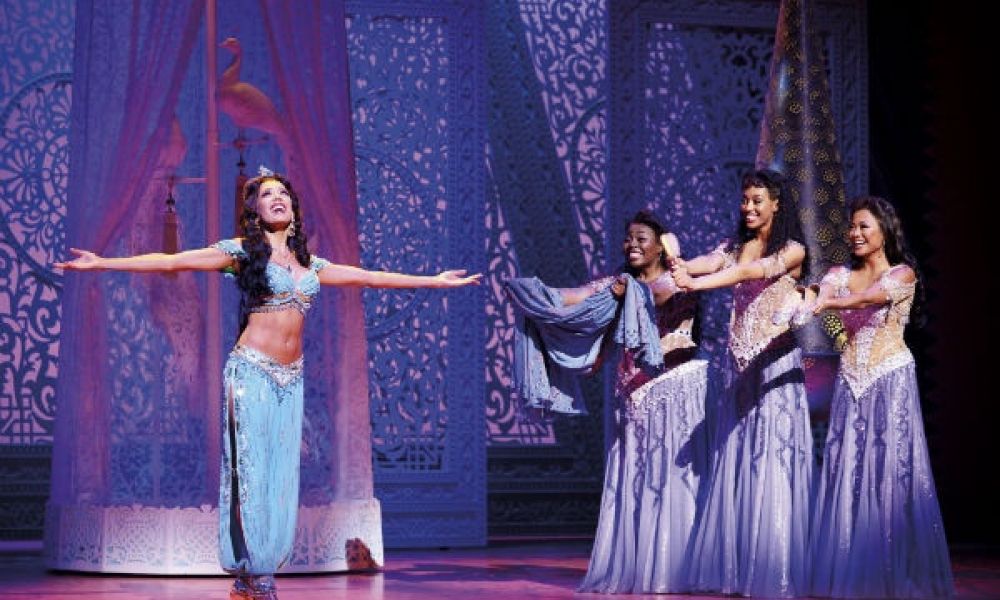 SPECTATOR
Lloyd Evans: Aladdin is played by Dean John-Wilson, a cocky slab of tanned muscle, whose reluctance to shine in the part cedes the limelight to Princess Jasmine (Jade Ewen, an absolute knockout). She plays the truculent royal as a gobby campus activist who claims the right to choose her husband and rule as his equal. This role will be the making of Ewen, a newcomer to the West End. 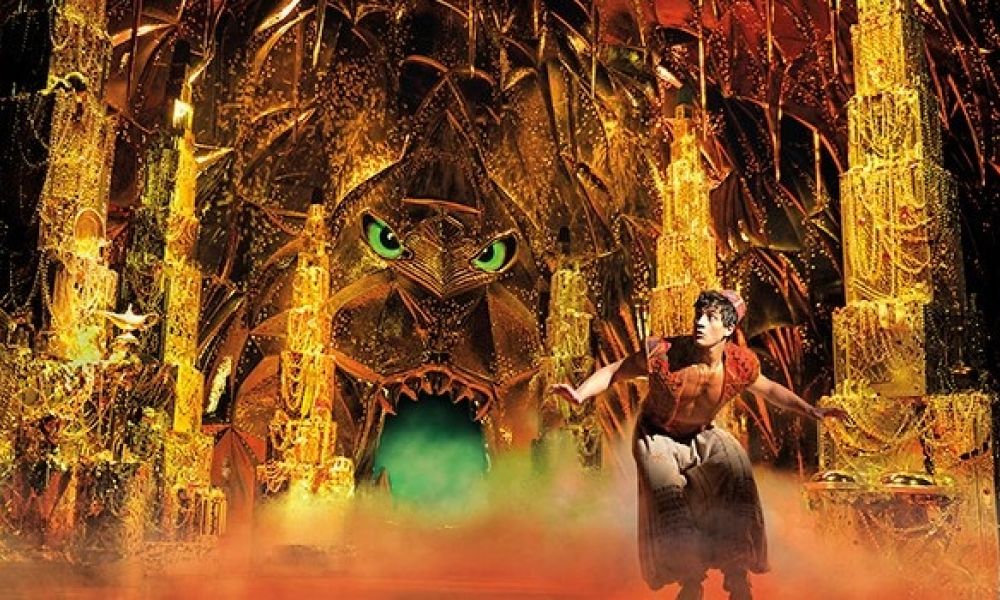 A YOUNGER THEATRE
Samuel Sims: Aladdin is very enjoyable and looks fantastic. The jokes are disappointingly thin and the tone, predominantly cheesy but the message of equality is a rousing one and the performances, especially from Nicholas’s Genie and John-Wilson’s Aladdin are spot on. You may also just wee a little as the magic carpet first takes flight.

ayoungerthe…
ON THE PURPLE CARPET

Cynthia Erivo dazzles on opening night of Aladdin
Cynthia Erivo, the British actress who is the toast of Broadway after winning a Tony Award for The Color Purple this week, was among the stars attending the glitzy opening night of Disney’s Aladdin. (She’s dating Aladdin star Dean John-Wilson.)