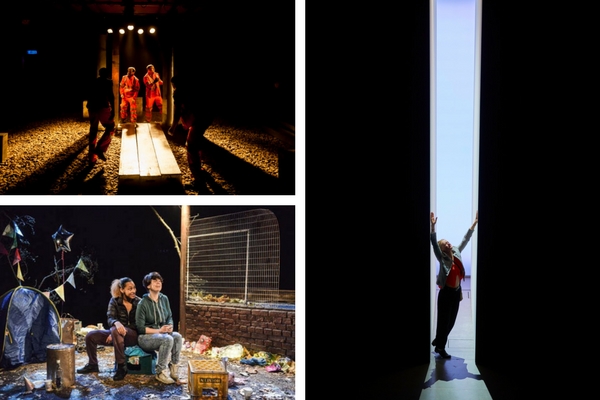 Clockwise from top left: 31 Hours, Heisenberg and All the Little Lights.

I can’t get out of my mind the idea of touring two new, one-act plays I’ve seen recently – Jane Upton‘s All The Little Lights and Kieran Knowles‘ 31 Hours – as a double bill. It’s something that would absolutely warrant generous funding for tackling important and urgent social issues, and you could map out the tour along the Network Rail grid.

These potential companion pieces are both set alongside the railway, you see. 31 Hours, inspired by Kieran Knowles‘ own experience as a graduate trainee manager for one of the rail operators, centres on four men whose job it is to clean up after someone commits suicide by train which, as the title signifies, happens every 31 Hours in the UK. Through their stories and the pressures this horrific duty places on them, we also hear the stories of some of those – disproportionately young men – who take their own lives.

As I said on Twitter at the time, the play is, in my mind, three things at once: one, an addition to the best tradition of plays about the workplace (and the jobs most of us don’t like to think about, let alone, would ever consider doing); two, a deconstruction of the modern male psyche (Robert Webb ought to include 31 Hours‘ “Man Up” speech in the next edition of his How Not to Be a Boy memoir) and prevalence of male suicide; and three, a poetic ensemble piece performed by four talented young male actors – James Wallwork, Salvatore D’Aquilla, Jack Sunderland and Abdul Salis (definitely one to watch, incredible strength and stillness).

In All The Little Lights, first seen at Nottingham Playhouse, it’s three desperate teenaged girls, with plenty of appalling pressures of their own, who meet along the railway for one last night together. Jane Upton was inspired to write this George Devine-winning hour’s drama by the Rochdale sex ring scandal, in which girls from poor, white, working-class families were targeted and groomed. As in 31 Hours, the rumble of trains is a striking aural backdrop, and, as the girls play chicken on the tracks, there’s the constant suspicion that one may just not leap to safety in time.

Tessie Orange-Turner (as bully Joanne), Sarah Hoare (as Lisa, struggling to flee from her past) and Esther-Grace (as naive youngest Amy – who does an adorable ET impression) are terrific as the teens: making these three girls, the type of girls society so often forgets, simply unforgettable.

To the West End for another sub-90 minute evening of new writing: there was a real sense of occasion on the opening night at Wyndham’s Theatre for the world premiere of Heisenberg: The Uncertainty Principle. This is the first offering from Elliott Harper, the new production company founded by former National Theatre colleagues, director Marianne Elliott and producer Chris Harper, and it also marks the reunion of Elliott with Simon Stephens, who had a mega NT hit with The Curious Incident of the Dog in the Night-time. So, many of the great and good turned up for the opening, when it felt like the whole industry was rooting for Elliott Harper’s success (and, next up, in 2018, they have the wildly anticipated, gender-switch revival of Sondheim’s Company starring Rosalie Craig and Patti LuPone).

Heisenberg is a slighter piece, and certainly doesn’t pack the social urgency punch of 31 Hours or All the Little Lights, but in its depiction of two quirky, damaged souls who find one another, it portrays a pervasive, modern loneliness I imagine most of us can identify with. Anne-Marie Duff and Kenneth Cranham (that craggy voice!) are two actors I’m always happy to spend an hour with too, and Paule Constable’s spectacular, colour-floods of lighting on Bunny Christie’s sliding, shifting, telescopic sets the mood well.

More on-the-night thoughts and selected quotes on these plays in the tweets below.

31 Hours continues at the Bunker Theatre until 28 October 2017

All The Little Lights continues at the Arcola Theatre until 4 November 2017.

Heisenberg: The Uncertainty Principle continues at Wyndham’s Theatre until 6 January 2018.