Picture this: My new neighbourhood Cervantes Theatre is a must-visit

Home-Picture this: My new neighbourhood Cervantes Theatre is a must-visit

Picture this: My new neighbourhood Cervantes Theatre is a must-visit 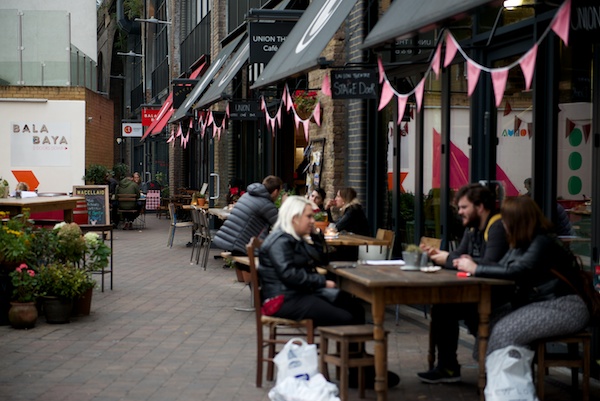 Living in SE1 in London, I’m absolutely spoilt for theatres. The South Bank powerhouses of the National Theatre, Old Vic and Young Vic, Shakespeare’s Globe, and, as of later this month, the new Bridge Theatre under the auspices of former NT uber-duo Nicks Hytner and Starr, are all within ten minutes’ walking distance. But even more thrillingly, I have a surfeit of Off-West End theatres on my doorstep: the Menier Chocolate Factory, Bunker Theatre, White Bear Theatre, Southwark Playhouse and Union Theatre.

And to that second list, I can now add another: the Cervantes Theatre. The Cervantes is just three doors down from the relaunched Union, down the buzzing new cultural alleyway of the Old Union Yard Arches off Union Street, where visitors can also visit a choice of bars and restaurants, a flying circus gym and the Africa Centre, all custom-built into the arches under the railway.

Officially unveiled last November, the Cervantes is the new home of the Spanish Theatre Company, which is dedicated to promoting the best of Spanish and Latin American drama for London audiences. Run by Jorge de Juan and Paula Paz, it presents productions performed by twin casts performing Mondays to Wednesdays and Thursdays to Saturdays in English.

I visited this past Friday night to see the world premiere of leading Spanish playwright Guillem Clua‘s explosive new two-hander The Swallow, inspired by the homophobic terrorist attack last year in Orlando, in which 39 people were murdered in a gay nightclub. It’s a sensational drama – indeed, having seen it in English, I’m tempted to return to see it in Spanish… and I don’t even speak Spanish.

A big part of the lure to return is the theatre itself: an intimate 75-capacity thrust auditorium with incredibly plush seats (like most of the theatre’s striking details, imported from Spain), upstairs bar and artistic lighting. It’s a little stunner.

On the night I attended, Lucky Stiff was opening at the neighbouring Union Theatre. “Where’s the Cervantes Theatre?”, I was asked by one friend after another who I bumped into outside the Union. I pointed up at the sign just feet away – right there.

With Brexit looming, which throws the resident status of so many of the actors and theatremakers who work there into doubt, and so much of British society looking inwards, it feels to me even more important to expose ourselves to and support European voices.

I was so impressed by my first visit to the Cervantes that I returned the next day, dragging along my photographer partner Peter Jones to take a few more photos – including some exterior shots to demonstrate just how close to the Union it is!

The Swallow continues at the Cervantes Theatre until 14 October 2017.