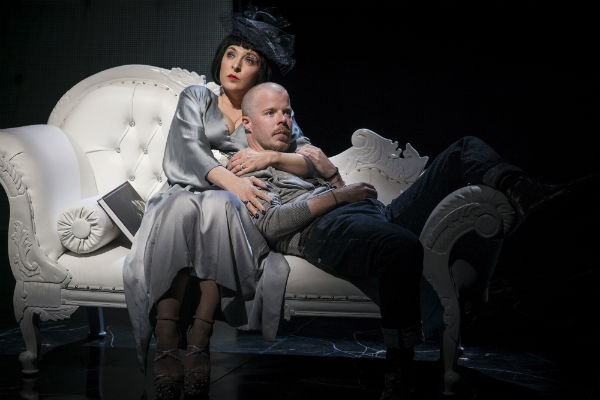 Monsoon is about as close as I get in my day-to-day life to designer fashion – which is to say, I know NOTHING about fashion that I haven’t picked up from The Devil Wears Prada.

In my theatregoing experience, James Phillips‘ new play, McQueen, which premiered this week at London’s St James Theatre, is the first play I’ve come across to take a serious – and respectful – look at the fashion world in a dramatic context.

And for me, John Caird‘s resulting production throws up three big stars: the play’s subject, Alexander McQueen, the British designer who committed suicide in 2011; the actor who plays him, Stephen Wight (who I’ve always had a lot of time for, since seeing him in his breakthrough appearance in 2007 Dealer’s Choice at the Menier Chocolate Factory); and, well, fashion itself.

The best moments in Phillips’ play are when this trio of stars align: when Wight’s performance gets into full flow, as McQueen, ruminating on what fashion means to him – and, even more specifically, what a beautiful dress means:

“You’re still thinking that a dress is just an outside, but it’s more than than, it alters you inside too. An urchin is an Amazon, she just doesn’t know it yet. You are more complicated that you know, but not more complicated that you suspect; and the clothes, they can show you that. It’s you, for every moment you’re in it. You’re golden. I can do that, that’s what I can do.”

I wish there were more of these moments. Still, they provide enough insight to blow huge, gaping holes through my misplaced reverse snobbery: this McQueen speaks of fashion, and makes me recognise it through the eloquent and heartfelt descriptions of his creative inspiration and process, as, without doubt, a form of art.

What’s more, Phillips’ play teaches me, McQueen’s presentation of his fashion creations was pure theatre. Music, motifs and an ensemble of dancing mannequins (choreographed by Christopher Marney) help recreate scenes from some of the designer’s most famous and fantastical shows and collections, as the play takes us on kaleidoscopic ride through an other-worldly night-time London landscape (with set designed by David Farley, video by Timothy Bird). Take a look through the picture gallery: this is theatre as fashion show.

While my budget may still only extend as far as Monsoon, my interest in high fashion, and certainly in the late Alexander McQueen, has been piqued. I think I’ll have to follow up soon with a visit to the current McQueen exhibition at the Victoria & Albert Museum, the first and largest retrospective of McQueen’s work to be presented in Europe.

The play McQueen continues at the St James Theatre until 27 June 2015. The exhibition Alexander McQueen: Savage Beauty is at the V&A Museum until 2 August 2015.