Photos and podcast: On Ayckbourn and comedy with How The Other Half Loves’ cast and director

Home-Photos and podcast: On Ayckbourn and comedy with How The Other Half Loves’ cast and director

Photos and podcast: On Ayckbourn and comedy with How The Other Half Loves’ cast and director 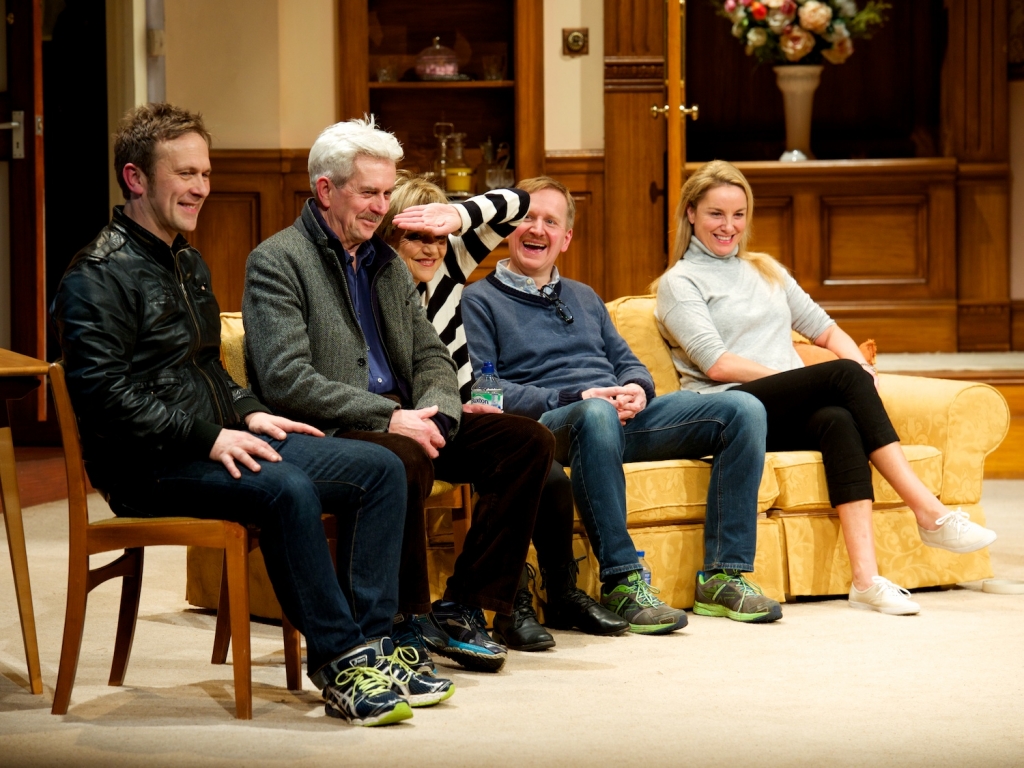 Jason Merrells, Nicholas Le Prevost, Gillian Wright, Matthew Cottle and Tamzin Outhwaite at the How the Other Half Loves post-show Q&A

What’s the essence of good comedy? And what marks out an Alan Ayckbourn comedy in particular? What does the UK’s most prolific, produced playwright (80 plays and counting) demand of actors and directors? And, despite the (often onerous, occasionally near-impossible) demands, why do actors and directors relish coming back for more?

These were some the questions posed to director Alan Strachan and his stellar cast for How the Other Half Loves – Nicholas Le Prevost, Jenny Seagrove, Jason Merrells, Tamzin Outhwaite, Gillian Wright and Matthew Cottle – at the post-show Q&A I was delighted to chair at the Theatre Royal Haymarket last night (29 March 2016).

This is the first West End revival of this early Ayckbourn hit (written and set in 1969, it had its West End premiere in 1970 at the Lyric Theatre, where it ran for more than two years). In it, three married couples are derailed by an affair, and multiple accusations of affairs, over the course of a few days and two disastrous, overlapping dinner parties.

Strachan is one of the country’s most respected and experienced Ayckbourn interpreters, with more than a dozen Ayckbourns to his credit, including How the Other Half Loves: this is the third time he’s revived this particular play, and the second time with Nicholas Le Prevost in the pivotal (chaotically confused) part of Frank Foster. Seagrove, Cottle and Outhwaite are all seasoned Ayckbourn aficionados as well (Outhwaite was cast by Ayckbourn in her professional play – Absent Friends – in Scarborough, 20 years ago), while Merrells and Wright are relishing their Ayckbourn debuts in How the Other Half Loves.

Other questions I loved last night: How does Matthew Cottle go so red in the face? What’s the point of previews… and pauses? And how much meaning can be invested in the word “another”? Have a listen to the full, unedited podcast for answers, insights and plenty of laughs. Also check out the pictures (care of Peter Jones) and some top-notch live-tweeting via the show account @OtherHalfLoves.

How the Other Half Loves officially opens tomorrow night (31 March 2016) and is booking at the West End’s Theatre Royal Haymarket until 25 June 2016.

How The Other Half Loves