Photos and podcast: I’m Getting My Act Together with Landi Oshinowo and co

Home-Past Events – Photos and podcast: I’m Getting My Act Together with Landi Oshinowo and co

Photos and podcast: I’m Getting My Act Together with Landi Oshinowo and co 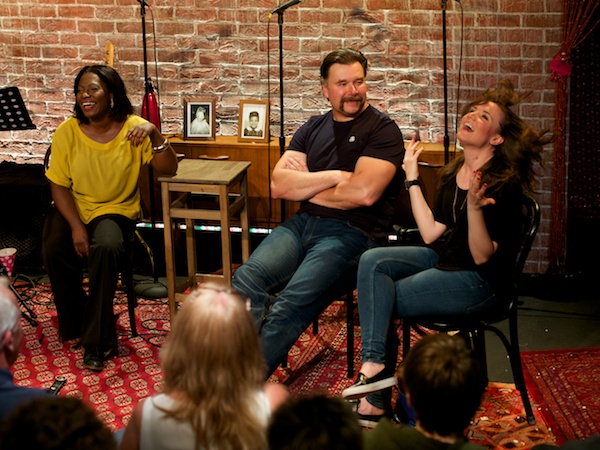 Landi Oshinowo, Nicholas Colicos and Rosanna Hyland at I’m Getting My At Together’s post-show Q&A

Last seen in London in 1981, when its premiere production ran at the West End’s Apollo Theatre after success Off-Broadway, I’m Getting My Act Together and Taking It on the Road has returned 35 years on for a limited season at Jermyn Street Theatre, where Landi Oshinowo takes on the role of pop star Heather (originated in the UK by Diane Langton) who is in the midst of reinventing her act and her life.

I’m Getting My Act Together… is regarded, unofficially, as the world’s “first feminist musical” as Heather, and her two backing singers (played in this production by Rosanna Hyland and Kristin Gaetz), reject the stereotypes imposed on them by society at large and the men in their life, including Heather’s increasingly perplexed manager – and one-time lover – Joe (played by Nicolas Colicos).

For this new production, director Matthew Gould restored many of the contemporaneous references from the original script (which the authors Gretchen Cryer and Nancy Ford removed for a recent New York update) and rooted it firmly in its 1978 period (see if you can identify the Seventies’ hunk pin-ups – I got one wrong). But elsewhere, there’s a major update from the show’s premiere outings: in the casting of a black star (this revival was planned as a vehicle for Landi) as Heather, the struggles of a single mum in the 1970s – as well as the retention of a black-and-white minstrel number in Heather’s act – gain extra layers of meaning. 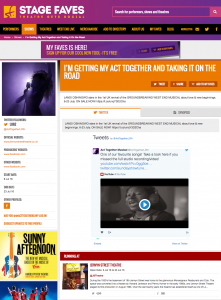 Get all social media for I’m Getting My Act Together & its cast on www.stagefaves.com

I’m Getting My Act Together… also boasts some cracking songs, which should all be classics (why aren’t they already?!), including: “Natural High”, “Old Friend”, “Dear Tom”, “Put in a Package and Sold”, “Strong Woman Number”, “In a Simple Way I Love You” and “Miss America”. Pray for a cast recording.

After yesterday’s matinee performance of I’m Getting My Act Together…, I chaired a Q&A with director Matthew Gould and cast members Landi Oshinowo, Nicolas Colicos and Rosanna Hyland, with additional interjections from producer Effie Stevenson from SDWC Productions.

Amongst the questions raised: Why isn’t the musical revived more often? How far has feminism come since the 1970s? Does the show’s central mantra – “it’s just not possible to have a decent, constructive relationship with anybody” – hold any truth? How have gender roles changed? Do men have it easier or harder today figuring out how to not to be chauvinists? In the age of internet dating, are we reverting even more to projecting fantasy versions of ourselves? What does I’m Getting My Act Together… have in common with Hair and A Chorus Line? How many other “feminist musicals” can you name?

Have a listen to the unedited podcast for some of the answers and more questions (unfortunately, due to a technical fault, I only managed to record the first half of the discussion – extra incentive to be sure to get tickets to attend the next one!). Also scroll through the live-tweets care of @ActTogetherLDN, photos from the event care of Peter Jones and a short Facebook Live video with yours truly at the theatre. Production photography by Richard Lakos.

I’m Getting My Act Together and Taking It on the Road continues at London’s Jermyn Street Theatre until 23 July 2016.

Getting My Act Together – Curated tweets by TerriPaddock