This afternoon I caught up with the ITV highlights programme of last night’s Olivier Awards. While quite entertaining, it’s no surprise that the telecast missed out a lot of good stuff – sometimes right in the middle of a quote. (Ahem, see Kevin Spacey, oh what’s his name… Matthew Warchus.) The TV version was just 1 hour 45 minutes, with numerous commercial breaks, versus the three-hour live version, with just one 12-minute break (not an interval, mind; we were not permitted to leave the auditorium – bladders of steel, ladies.)

So I thought it was worth pulling together a list of the night’s best – or in the words of the Oliviers’ headline sponsor MasterCard (well, we really should give them a plug), the night’s most priceless – quotes from where I was sitting at the Royal Opera House. (Thanks to Rich Major of See Tickets for inviting me!) 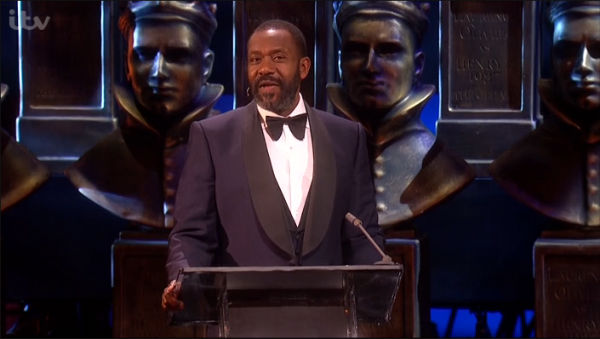 1. Host Lenny Henry on the magic of theatre: “Magic – now you’ve got a job, now you don’t”

2. “People say: ‘You’re David Lan. I hear you run the best theatre in London.’ I’m perfectly happy to say, I run one of the best theatres in Waterloo” – David Lan, collecting Best Play Revival with Ivo van Hove for A View from the Bridge

4. “Bull is about aggressive and competitive behaviour, but the qualities that went into making the production couldn’t be more different: collaboration, passion and diligence” – Director Clare Lizzimore, accepting Outstanding Achievement in an Affiliate Theatre for Mike Bartlett’s Bull 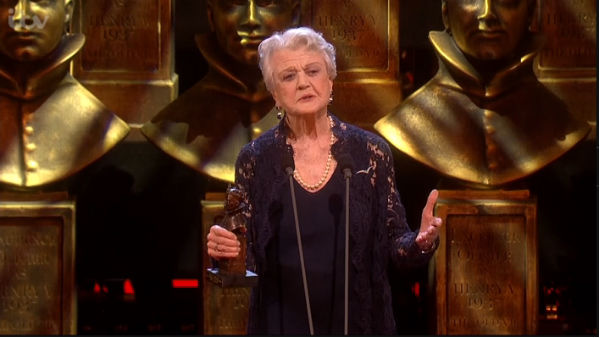 “Here I am, creeping up to 90 and I’m feeling like a million dollars. Because here I am, I’m in London, in this magnificent hall, and I’m with all of you, my roots. Where I began. And I’m still with you…. It’s the life and thank god, I’m still in it.” – Dame Angela Lansbury, accepting the award for Best Supporting Actress in a Play for Blithe Spirit

6. And Dame Angela Lansbury on forgetting the name of the first play she did in London, early in her career: “I can’t remember a lot of things these days – except I can remember my lines!”

7. “I got into theatre because I hoped that experimental theatre could also be popular. And to do that you need support. This play has had so much support… If you write down the idea on a piece of paper, it sounds really bad” – Mike Bartlett, accepting Best New Play for King Charles III

8. And a special thanks from Mike Bartlett for King Charles III: “Thank you to the Royal Family for not closing us down for treason.” 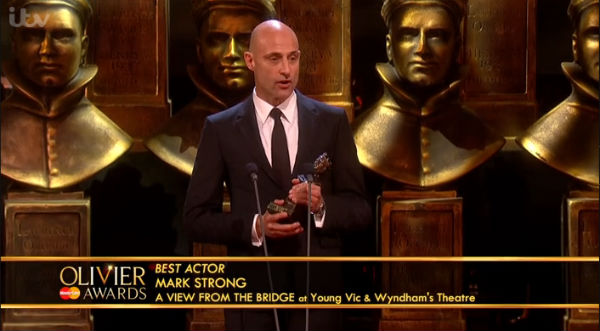 Mark Strong collects Best Actor for A View from the Bridge

“And that made me realise: thousands of years have gone by and we still have this thing called live theatre. And the reason is that we need to be able to compare ourselves to what we see onstage, judge ourselves, decide what’s right, what’s wrong, who we are, why we’re here. That’s the point of theatre.” – Mark Strong, accepting Best Actor for A View From the Bridge 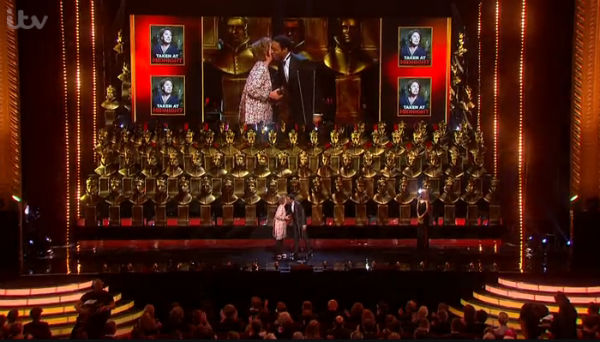 10. Penelope Wilton was a little besotted with Chiwetel Ejiofor, who presented her with her Best Actress Award for Taken at Midnight: “I just asked if I could give him a kiss…. And he said I could…. It was lovely.” To which host Lenny Henry later quipped: “I would’ve snogged her.”

11. On a more serious note from Penelope Wilton: “Acting is a collaborative art. I wouldn’t be here collecting this award if I hadn’t been surrounded by some of the most talented, generous people.”

12. “It’s a very long journey from our spit and sawdust past to the gilt and glamour of this [the Oliviers ceremony]” – La Soiree founder Brett Haylock, accepting Best Entertainment

13. Best Choreographer for Memphis, Serjio Trujillo, tells those watching on YouTube from his homeland in Colombia: “Just know that this moment is possible, if you surround yourself with the love and support of your friends and your family.” 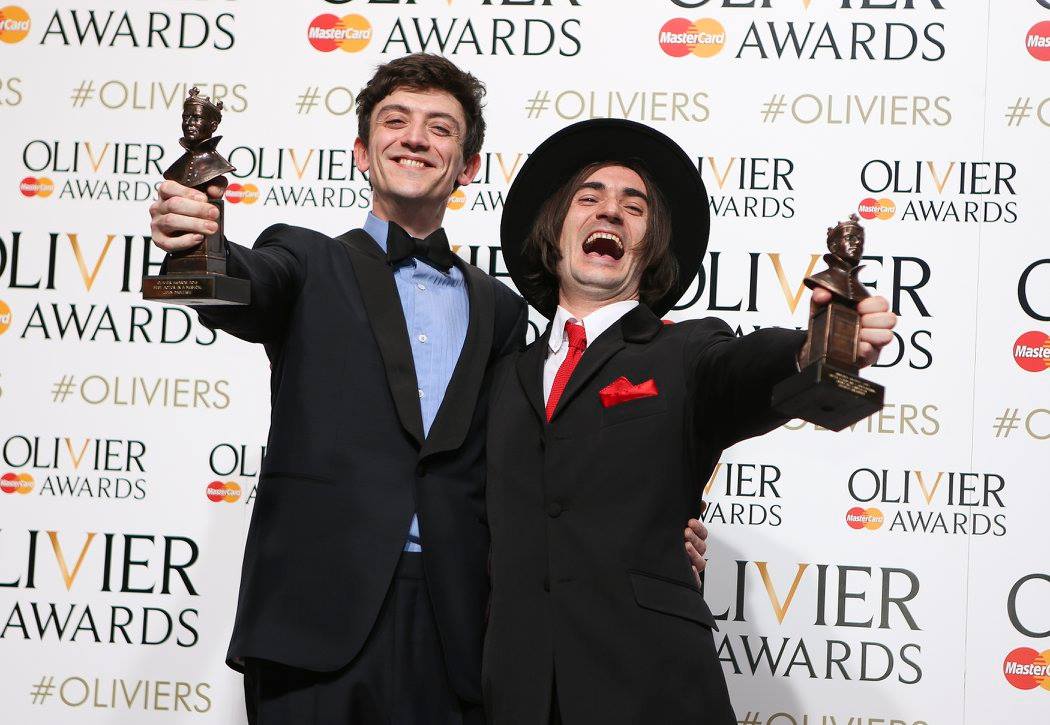 14. “I think when you write songs, you write about people… People are the source of my material. And London is a wonderful place to be for people. So, the next time you’re sitting in a park somewhere, and you see someone like me looking at you, don’t phone the police. I’m just writing” – Ray Davies, accepting Outstanding Achievement in Music for Sunny Afternoon

15. “Thank you, Dave, for being you.” – George Maguire, collecting Best Supporting Actor in a Musical for playing Kinks star Dave Davies in Sunny Afternoon 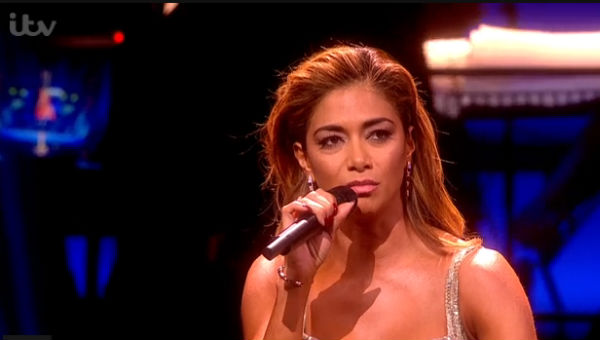 Nicole Scherzinger performed her Memory solo at the Oliviers

16. “Nicole Scherzinger, you smashed it. Give me a call. Whenever you like.” – Jamie Campbell Bower, presenter of the Best Supporting Actress in a Musical, on the performance of Memory by Scherzinger (who didn’t win the award)

17. “To my onstage partner, Ian McIntosh: this is for us” – Best Supporting Actress in a Musical winner Lorna Want’s address to McIntosh, who plays her onstage husband in Beautiful (and who had just lost out to George Maguire) 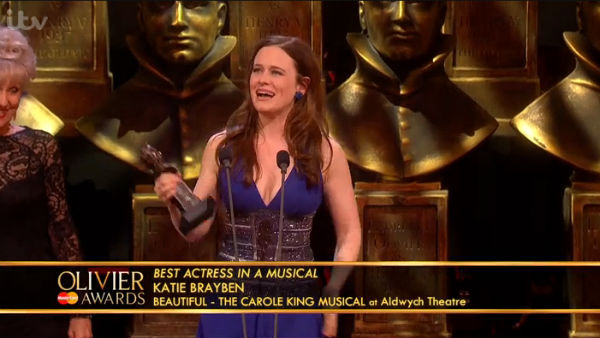 18. “Thanks to everybody in that audition because, you know, I just walked in – and now I’m here. This is crazy!” – Katie Brayben, accepting Best Actress in a Musical for playing Carole King in Beautiful

19. “About three days ago I phoned my mum, and I said, look we’ll have a great night [at the Oliviers] but I don’t think we’ll win… She said: ‘I’ve had a think about it and I agree with you. You might get lighting.’ So mum, we got this – as well as lighting.” Donmar Warehouse artistic director Josie Rourke, collecting Best Musical Revival for City of Angels

19. Dame Angela Lansbury presenting the penultimate Olivier, for Best New Musical, to Sunny Afternoon. “I was so happy to be here before, I decided to come back – briefly… Musicals are something I’m very fond of.” (An understatement?)

20. “It’s not really a musical like other musicals, but it is about music and the greatest music ever written” – Book writer Joe Penhall, accepting Best New Musical for Sunny Afternoon 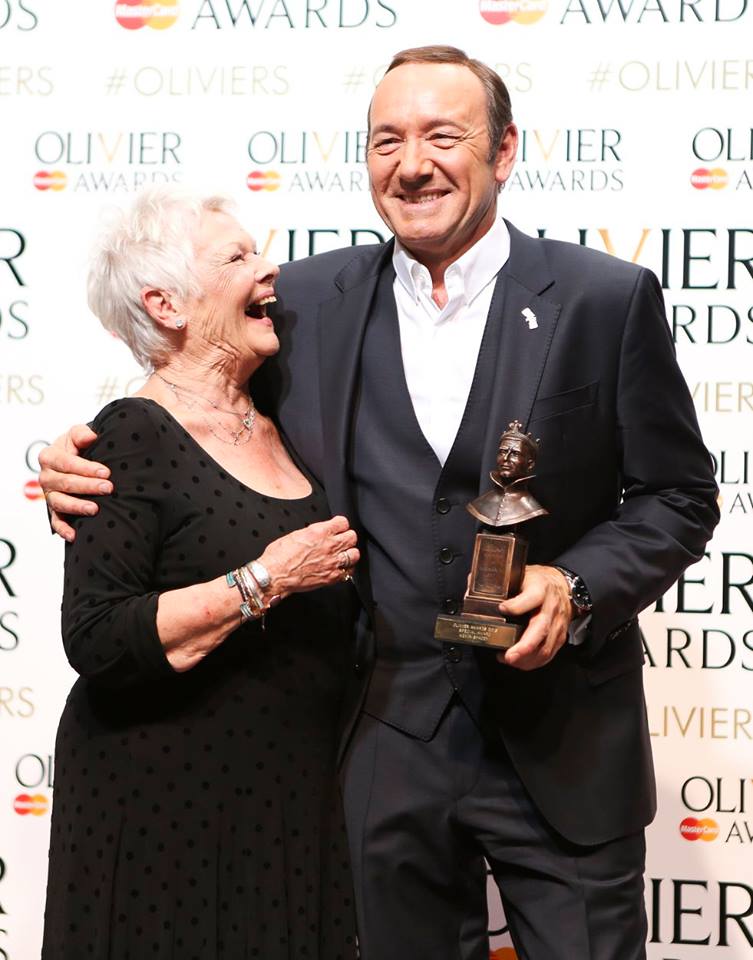 Judi Dench presented the Society’s Special Award to Kevin Spacey: evidently, they often have lots to laugh about.

21. “Kevin Spacey: the man who introduced me to caramel macchiato. The only man in the world who would make me dress up as a lobster and spend the day in Trafalgar Square. And the only man I know who arrived at my front door in the middle of a thunderstorm with a ping pong table on his head. I could actually go on all evening.” – Dame Judi Dench presenting the final Special Award to outgoing Old Vic artistic director Kevin Spacey (I’d happily spend a whole evening listening to some of those stories!)

22. “I love that theatre [the Old Vic] more than I can begin to express to you” – Kevin Spacey, collecting his Special Award as he steps down after more than a decade running the Old Vic Theatre

23. And Spacey, at a momentary loss, on his successor, fellow Olivier Award winner Matthew Warchus: “As nice as this is, I don’t want to necessarily spend a lot of time looking back at the past of the Old Vic, even my Old Vic past. Because now there’s a wonderful man taking over… a man whose name has gone out of my head…. We should wish him the best.” 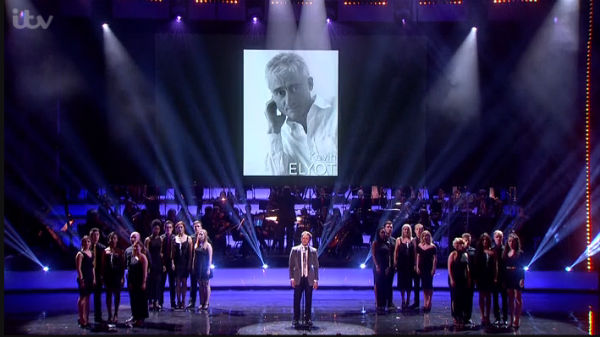 Julian Ovenden sings his tribute to artists passed away in the past year, including playwright Kevin Elyot

1. Julian Ovenden, having just finished in the West End revival of My Night with Reg, singing tributes number “Smile and the World Smiles With You” as the late My Night with Reg playwright Kevin Elyot is commemorated. Elyot died on 7 June 2014, during rehearsals for the Donmar Warehouse production starring Ovenden. 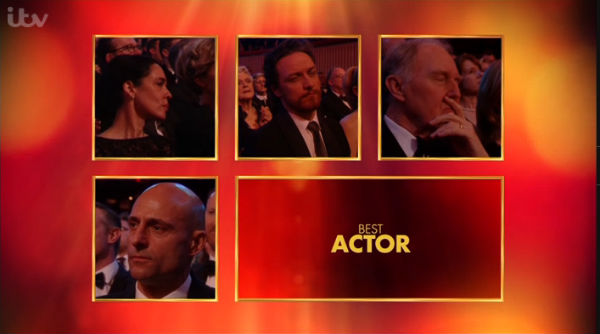 3. Mark Strong‘s look of disbelief as his name was read out for Best Actor. As he took to the stage, he continued to shake his head grimly and then admitted: “I am in such a strong category with such incredible actors. I really wasn’t expecting this. I’ve spent all the time since the nominations convinced that somebody else was going to win.” 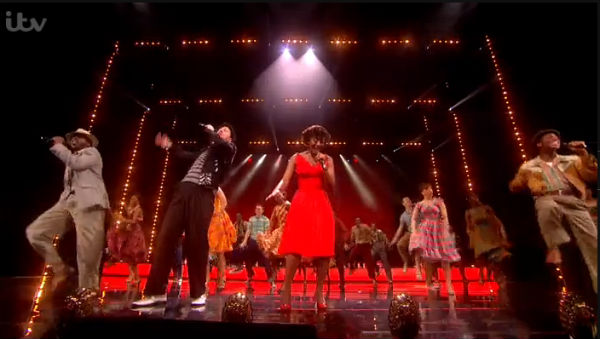 Nominees Rolan Bell, Killian Donnelly, Beverley Knight, Jason Pennycooke gave one of the night’s most energetic performances, though the show’s only wins for Best Theatre Choreographer and Best Sound Design

5. Tremendous performances all round! Particularly from Nicole Scherzinger and the casts of Memphis, Sunny Afternoon and Porgy and Bess.

6. The funny faces pulled, and very few words mumbled, by director Richard Jones, who collected both Opera awards in quick succession. Which prompted Lenny Henry to gush: “I love that guy!” 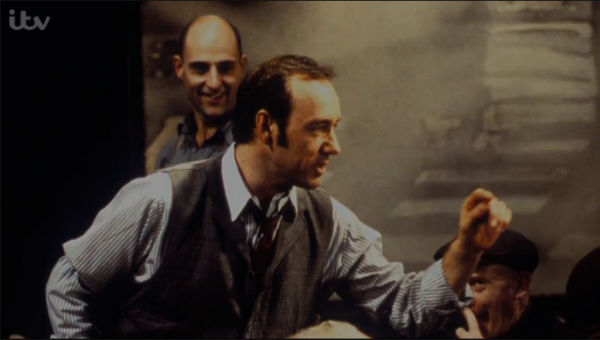 Mark Strong (back) appeared with Kevin Spacey in The Iceman Cometh in 1998/9: both had more hair then.

7. Flashback: Mark Strong popping up (again) in the video commemorating Kevin Spacey‘s stage work in London – a production shot of the two men in the 1998 Almeida revival of The Iceman Cometh, which transferred to the Old Vic and won Spacey his first Olivier Award (for Best Actor). 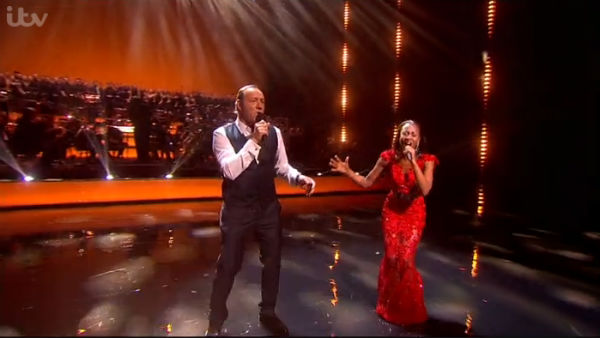 8. A totally unexpected and somewhat surreal finale: Kevin Spacey‘s “Bridge Over Troubled Water” duet with Memphis star Beverley Knight. What a classy woman: bringing the house down with this just moments after losing Best Actress in a Musical to Katie Brayben.

The Olivier Awards highlights programme is available to watch on ITV Player until 12 May 2015.