Never mind Titus: The West End is awash with blood

Home-Never mind Titus: The West End is awash with blood

Never mind Titus: The West End is awash with blood

There’s been a lot of media attention around the Globe’s Titus Andronicus. Once again, Lucy Bailey’s production – which starred Douglas Hodge in its first 2006 outing and now has William Houston in the title role – has got audiences fainting on Bankside.

Titus, with the strapline “brutality of the highest order”, is an extreme example of butchery, but blood-letting is fairly commonplace in Shakespeare and Jacobean tragedy. I imagine the Globe, RSC and National budget pretty generously year-round for stage blood. 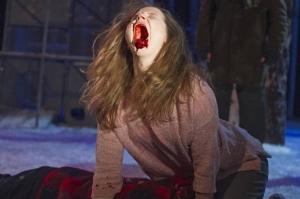 What’s struck me recently, however, is how much blood has been flying around the commercial West End (admittedly, transferred in, but still underwritten by commercial producers taking big risks). We’ve got vampires sucking the stuff up in Let the Right One In, Orwellian torture scenes (and rats) in Headlong’s 1984 at the Playhouse and, when Urinetown secures its transfer, splattering skulls at a West End venue tbc.

Sweeney Todd aside, I’m not sure I’ve seen quite so much painting the stage red since Martin McDonagh’s The Lieutenant of Inishmore ran at the West End’s Garrick Theatre in 2002.

Director Jamie Lloyd is partly answerable for the current vogue. Anthony Davies, co-owner of Pigs Might Fly, the leading stage and screen blood supplier, tells me that Lloyd’s James McAvoy-led Macbeth at Trafalgar Studios last year was one of the bloodiest stage productions they’ve ever supplied. “They used a huge quantity; there was blood raining down on the cast every day.”

Lloyd clearly got a taste for blood, as evidenced by its copious use in Urinetown. Expect to see more back at Trafalgar Studios when Martin Freeman tackles Richard III as part of Lloyd’s new Trafalgar Transformed season.

Davies also confirms my suspicions that theatrical blood use is on the increase: it’s an absolute deluge, in fact. Pigs Might Fly has doubled its revenue in the past year. To meet demand, the company has invested in a new super-sized vat that will enable them to manufacture five times more blood per batch. 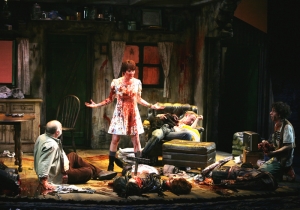 Why the sudden increase? Davies attributes it to younger theatre directors, like Lloyd, who are heavily influenced by television and film and are “actively trying to catch up with the shock factor” in those mediums. (Even in 2002, I’d say the same for Martin McDonagh who has, of course, gone on to celluloid success with equally bloody films like In Bruges.)

Maybe we’ve all been similarly influenced. Based on product orders, Davies reckons the general public, far from being put off by it, are relishing the gore now on offer: “There’s a real bloodthirst in all of us,” he tells me. If the rumoured American Psycho transfer does happen this autumn, we’ll all have even more opportunity to indulge it in the West End.

By the way, Nick Dudman is also the “blood of choice” over at the Globe. Yes, says Davies, “the fainting is down to us. Obviously our blood is far too realistic. We apologise to everyone” – though, in truth, he doesn’t sound at all apologetic.

Urinetown company manager David Curl also had a lot to tell me about blood and how to deal with it. I found it so interesting, I asked to publish his words in full. Click here to read about Urinetown’s bloody run at the St James Theatre.