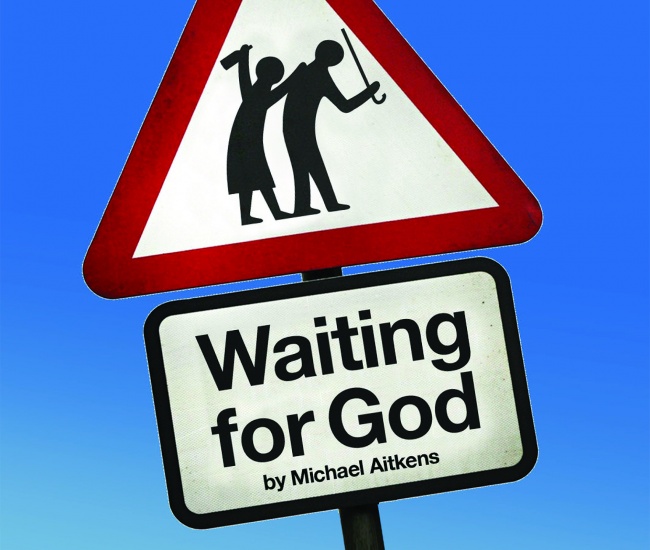 Michael Aitkens has adapted his hit TV sitcom for the stage

I was recently hired by the producer of Waiting for God to interview the show’s stars and writer as it embarks on a major UK tour. Here’s the first in a three-part series. Waiting for God continues touring until 8 July 2017. Visit the show website for full dates and tickets.

Michael Aitkens conceived and created the BAFTA-nominated BBC TV sitcom, Waiting for God, which ran for five series from 1990 to 1994. In total he’s written more than 200 scripts for film and television, including other hit series such as Midsomer Murders, Class Act, Trial By Marriage and, in the US, Alive and Kicking. Now, 27 years after Waiting for God was first seen onscreen, Aitkens has adapted it for the stage, in a major new touring production starring Jeffrey Holland and Nichola McAuliffe and directed by David Grindley. He talks to me about why Waiting for God was always meant for the stage and what’s changed in the past three decades.

Where did the original idea come from for the TV series Waiting for God?

I was living in Australia and a place called the Bayview Retirement Village opened up just over the hill from my house. There were these two old ducks just sitting out on the verandah and I thought, that’s a good location – I’ll put two old people sitting on the verandah and I’ll call it Talking Heads. By the time I got back to the UK, Alan Bennett had pinched the title!

But the idea wouldn’t go away. The people who lived at the home called it God’s Waiting Room. The title came from that and also as a sort of a parody of the play Waiting for Godot, in which nothing much happens.

Did you expect it be a hit?

No, you never do, you haven’t a clue. You just wade in and think, I’ve got a lot of children to support, let’s get it on and see how it goes.

Mainly it was down to Gareth Gwenlan at the BBC. Because I’d been out of the country for years, he really took over all the producing and directing and let me get on with the writing. He did a great job – he cast it brilliantly too with Stephanie Cole as Diana and Graham Crowden as Tom. 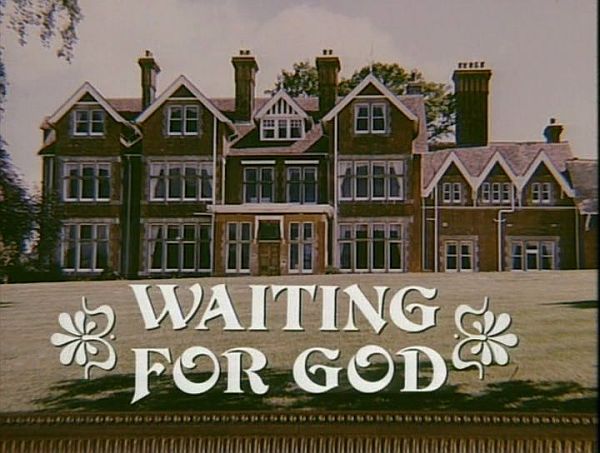 What did Cole and Crowden bring to the roles?

They were both very very good actors. Stephanie always used to say she was playing me in drag – I had a habit of sitting by the set and mouthing the lines. Graham was just wonderfully all over the place. He had this lovely, light quality to him. You could never predict how he was going to say a line. He always had an idiosyncratic twist on it.

One of the great joys about this country is the massive pool of fantastic character actors we have. I’ve written lots of Midsomer Murders. Whatever you write, you know you’re going to get a very good actor doing it. In other countries, they expect all their actors to look like they’ve spent too much time in the gym .

Was Stephanie Cole right? Is Diana a version of you?

The character of Diana has my view of humanity. I had an upbringing that required me to develop a very dark sense of humour from an early age as it was the only way to cope with my family. Treating them as a kind of macabre but funny nightmare served me well. That attitude has got me into trouble every now and then, especially when I was in America.

I was pitching for something over there a couple of years ago. Unfortunately, most Americans don’t understand our sort of deadpan humour. In the States, you have to say how wonderful everything you’ve ever done is. Everything is marvellous and life-affirming. And you can never have a bad meeting; meetings are always wonderful and positive, even if they turned you down flat.

In England, the more you run down your own track record – you know, ‘yes, I wrote Hamlet but it was pretty crap’ – the more people think you’re very self-confident and must be OK. In the US, they don’t get that.

When you started writing the TV series of Waiting for God, you were only 42. Did you have any trouble getting into the mindset of characters who were decades older?

No, it wasn’t difficult to get into the mindset because I had older relatives. I used to follow my rapidly deteriorating stepmother around; every trial and tribulation she went through influenced my thinking. With all of her hospital visits or whatever, I’d pick over the bones of her experience and take the funny bits.

There’s a speech in the play that I got straight off my 96-year-old aunt, who’s still going strong. She was berating male doctors after one of them told her, ‘oh, you must expect this at this time in your life’. She gave me a wonderful tirade – I just cleaned it up and polished it. It is iniquitous how they treat the old sometimes.

I also talked a lot to Age Concern, who would ask me to highlight this or that issue. As a result, the series kind of worked on two levels: on the one level, there was just the comedy; on a second level, I was kind of evangelising for old people, showing how badly they were often treated by people trying to rip them off.

A little while into Waiting for God, I got a letter from a doctor in Scotland saying, ‘you’ve missed out on the fact that they’re all fucking like rabbits. The corridor creeping is amazing.’ So in the next series, I put Tom and Diana in bed together.

At forty I was writing about older age objectively but now I’m cracking on myself it’s much more subjective. 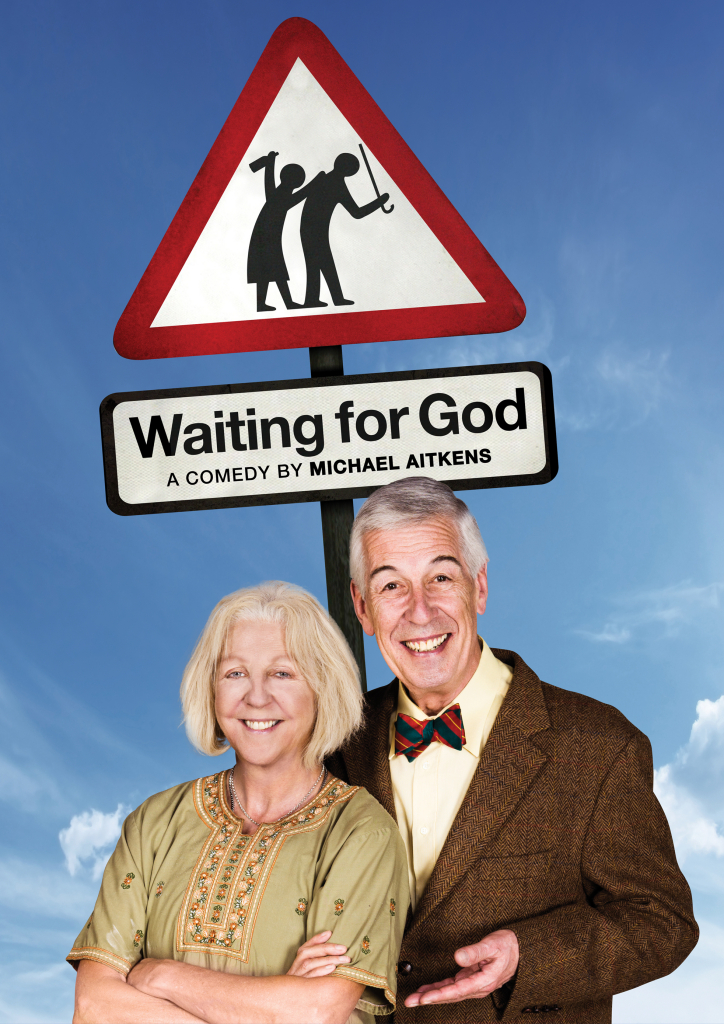 Do you think social attitudes have changed since you wrote Waiting for God for television?

Yes, I think our views on age have changed quite dramatically in the 27 years since the series was first onscreen, When I was growing up, my parents’ generation retired at 65, put their feet up for five years and then died. But now we just keep rocking on. I have this theory that a lot of us have linked our lives to Mick Jagger’s. So long as Mick can keep getting out there, so long as Keith doesn’t fold up, we’re okay. It’s the Jagger Syndrome: if Mick goes, a lot of us will follow the next week.

The play is set in 2017 not the Nineties, Diana uses a laptop and there are smartphones but I think the main change is in how the audience perceives the characters. Back then, the idea that older people should think and behave like Diana and Tom may have seemed outrageous. Now they’re more of the norm and hopefully the audience will identify with that.

Why did the Waiting for God television series finish?

I’d written 47 episodes and didn’t have much more to say. We could have probably squeezed another year out of the programme – or if we’d have been in America, we’d have squeezed another 300 episodes out of it and I’d be terribly rich by now. But I thought Waiting for God had run its natural path on the small screen so I deliberately made the last episode the end by marrying them off.

Out of the hundreds of scripts you’ve written for the screen, why choose to adapt Waiting for God for the stage?

It is natural theatre. The original idea was just two people talking. So it always was a stage piece really. So with the play of Waiting for God, I can get back more to the original idea: these two characters feeling each other out.

In which case, why have you waited 27 years to stage Waiting for God?

If I’d had any sense, I would have done it a long time ago. When it was still onscreen, the Theatre of Comedy asked me to do a stage version. It was my fault that it didn’t happen then. In the middle of the Nineties I was snowed under working on other television projects and, naively, I worried that it was too commercial a concept and might be seen as flogging the idea to death.

With the benefit of hindsight, I can see that was pretty dumb. I could have written the stage play then and it might have been running for twenty years by now!

Eventually I tried it out in Hawaii with the Oscar-winning American actress Patty Duke. It wasn’t quite what I was looking for but fortunately in my home town, there’s a very good semi pro group and I tried it again there three years ago and it went very well. Then, after more rewrites, producer James Seabright picked it up with director David Grindley coming on board and helping me get it into good touring shape. And here we are. It’s been a fun, evolving process. 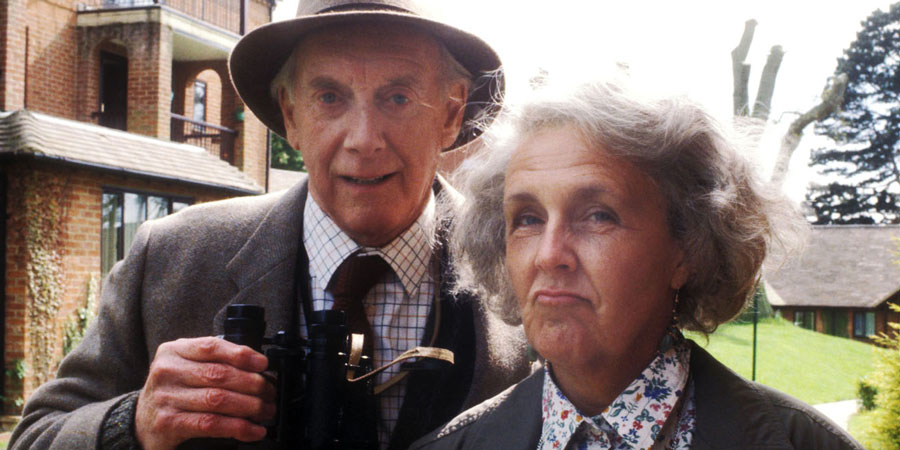 What’s the key difference between Waiting for God onstage versus onscreen?

It has a more concise structure onstage. It’s got a beginning, middle and end, and it’s much more about the relationship between Diana and Tom. The bits on the side are more peripheral now; they all feed into the central relationship and where that goes.

What do you want audiences to take away from Waiting for God?

I hope that they have a ‘make ‘em laugh, make ‘em cry’ evening in the theatre. If you work the formula correctly, it’s a romantic comedy, but there’s a point when there shouldn’t be a dry eye in the house. And then it ends in farce. Everyone should have a good time.

Are there serious messages in the play? Sure, as many as you want to take from it, but there’s no abstract point to it. You don’t come out thinking about your place in the universe, you come out thinking, ‘that was fun, where should we eat?’

Much of the audience will be Baby Boomers like myself, so seeing our own kind fighting tooth and nail to rage against the dying of the light will hopefully give them a bit of a lift.

How do you feel about getting older yourself?

Not too bad. So long as I can walk the dog for miles and play tennis life is good. I’ve just moved back to Jersey from whence I came and I live on a beautiful surf beach so I can get through days without going near my computer quite happily. I still like to work and I’m developing a new television series at the moment, but I live in fear of them picking it up and having to work through the summer.

No, I could never see myself living in a place like Bayview. I’ve got this kayak full of rocks, and when my time comes, I will paddle it out to sea and keep going.

Waiting for God continues on its UK tour until 8 July 2017.