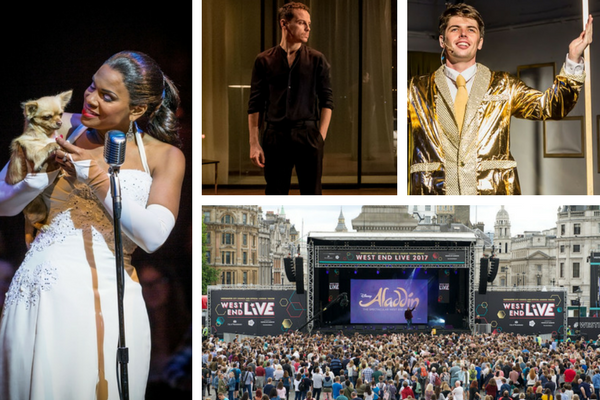 My theatre week last week started and ended with musicals. 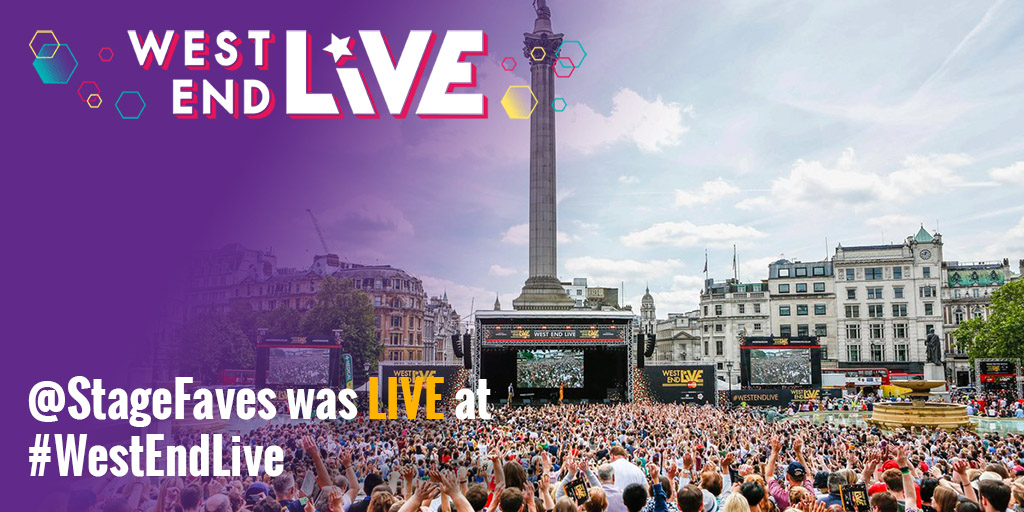 My partner Peter and I rushed back from our – rather too work-filled – fortnight in Mallorca just in time for West End Live. It’s incredible how much this free, two-day event has grown in its 13-year history. Having started out with a handful of shows and exhibitors in Leicester Square, it’s now totally overtaken Trafalgar Square where capacity crowds of 500,000 queue up for hours to watch an incredible line-up of top West End musicals and stars perform.

For this year’s West End Live, I was there with my incredibly hard-working and enthusiastic @StageFaves team, led by our fearless first-night vlogger Perry O’Bree and Olivia Mitchell, along with photographers Peter Jones and Darren Ross and performer-helpers (who themselves feature on StageFaves, having recently completed West End runs in Judy! at the Arts Theatre) Carmella Brown and Tom Reade. We have TONS of coverage on StageFaves – videos, photos, features and other fun stuff. So please do check that out. My personal highlights from West End Live? The length of the queues; Marisha Wallace, who performed with Dreamgirls and in her own set for which she also sprung a surprise duet with Rachel Tucker; and the most adorable stage door pug. 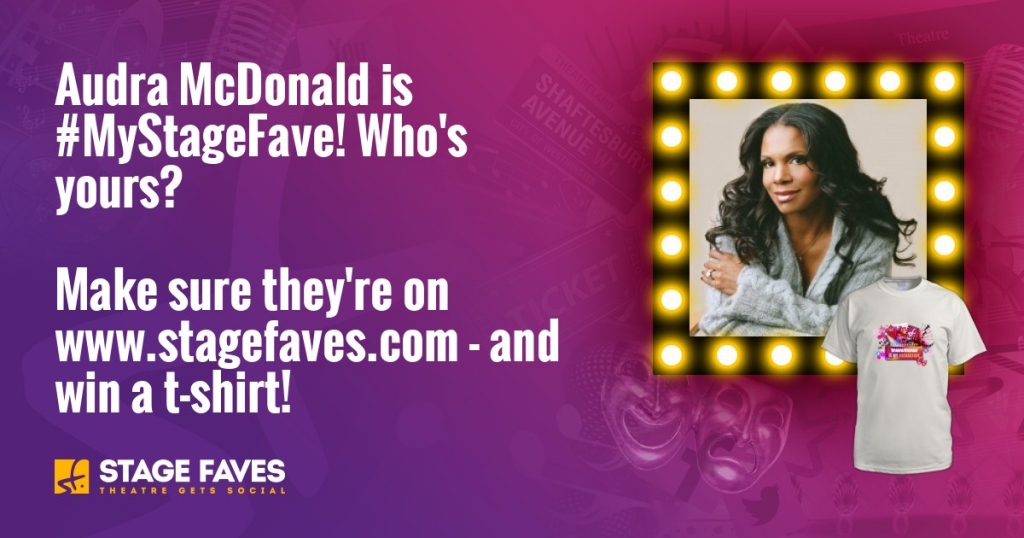 Not content with spending two days with him at West End Live, Perry O’Bree was also my plus-one on Tuesday night for the West End premiere of Lady Day at Emerson’s Bar & Grill. We’re so lucky to finally have six-time Tony Award winner Audra McDonald making her West End debut. (We had to wait even longer than planned for this transfer, which was meant to happen last summer but was delayed after McDonald’s unexpected pregnancy.) She won her sixth Tony for her performance as jazz legend Billie Holiday in Lonny Price’s revival of Lanie Robertson’s play. It’s billed as a play but don’t worry, you get of Billie standards, including ‘God Bless the Child’ and ‘Strange Fruit’.

If there’s a tiny frustration watching Lady Day, it’s knowing that McDonald actually holds back on her own powerhouse vocals in order to truthfully portray Holiday at the end of her tragic life and career (she died, aged 44, a few months after the setting of the play from heart failure caused by cirrhosis of the liver after years of drug and alcohol addiction). But let’s hope they’ll be more West End credits for McDonald soon, which will show more of her range and versatility.

On Wednesday, I hosted my second post-show Q&A at my third viewing of Jon Brittain‘s brilliant Olivier Award-winning play Rotterdam. This is a beautiful and important play. Check out the Rotterdam Q&A podcast and photos here.

On Thursday, I finally caught up with Robert Icke‘s Almeida Theatre production of Shakespeare’s Hamlet. I’ve seen many productions of Hamlet over the years and, to be honest, don’t feel a pressing need to see that many more – I made a conscious decision to forego the mercilessly over-hyped Benedict Cumberbatch one. But I’m glad I didn’t make that mistake this time around. This production really is special. Yes, Andrew Scott‘s performance is astonishing – him clutching and pounding at his chest in attempt to soothe his battered heart or fluttering fingers through the air to chase after his thoughts during a raw soliloquy shared confessionally with a pin-drop-quiet audience – but it’s the sum of all the production’s parts that keep you on the edge of your seat through the nearly four-hour running time.

Director Robert Icke uses the setting of the Harold Pinter theatre beautifully too, particularly in Act 2, Scene 2. When Hamlet says: “this most excellent canopy, the air — look you, this brave o’erhanging firmament, this majestical roof fretted with golden fire”, the house lights slowly come up and we all lift our eyes with Scott to the listed theatre’s ornate ceiling.

Get all social media for The Quentin Dentin Show & its cast on www.stagefaves.com

A special bonus for me was being able to take Peter to this production – he was a Hamlet virgin and frequently finds Shakespeare impenetrable and off-putting (not to mention sleep-inducing). He was enthralled throughout. And now he has a much better appreciation for Tom Stoppard’s Rosencrantz and Guildenstern Are Dead, which I took him to at the Old Vic earlier this year.

For this past Saturday matinee, I dodged demonstrations in central London to catch up with original British musical The Quentin Dentin Show at the Tristan Bates Theatre. I admire this show’s gutsy young producer Hannah Elsy who has turned the show into a little cult phenomenon, building it up from a scratch night to festival hit to full-length musical in front of paying audiences throughout. This extended season at Tristan Bates is, I’m sure, just another step on the journey that will continue for some time. Well, it’s been called the Rocky Horror for the new millennium, after all.