My theatre diary: ‘Tis Pity, Made in Dagenham, East Is East and Neville’s Island

My theatre diary: ‘Tis Pity, Made in Dagenham, East Is East and Neville’s Island 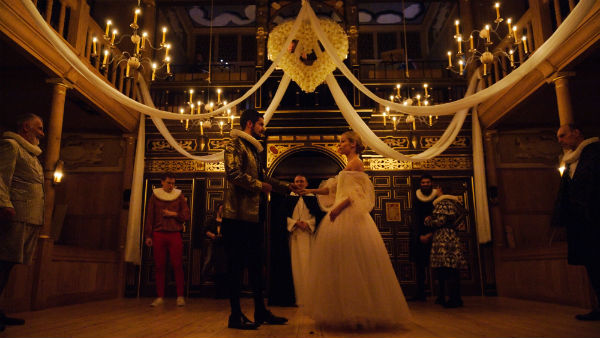 I’m playing catch-up. Here are four shows I caught before my turkey-filled escape to the States last week for Thanksgiving. All of which serve up entertaining evenings in the theatre.

As usual, I’ve listed them in closing date order. Don’t delay with the first in particular, as it finishes its limited season in a week. For the others, you have a little more time if you want to plan a Christmas holiday treat – but book ahead to avoid last-minute disappointment.

Fiona Button and Max Bennett burn brighter than the candles in the Globe’s Sam Wanamaker Playhouse, as brother and sister Annabella and Giovanni, overcome with incestuous lust for one another in Michael Longhurst’s steamy production of John Ford’s 1633 classic. “There’s absolutely no photography at any time in the theatre,” the usher orders as you’re seated, “particularly not during the nude scenes.” Well, at least we have the poster picture of the bare-skinned lovers, deemed too risqué to display by London Underground.

“Annabella, I am quite undone for love of thee, my sister.” 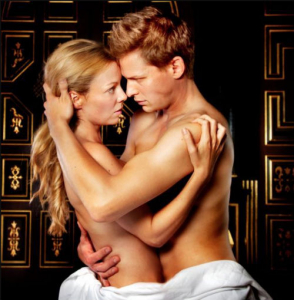 The poster image too explicit for Tube advertising

There’s equally lustful and blood-thirsty support from Noma Dumezweni as Hippolita, scorned mistress of Annabella’s cuckolded husband, and Philip Cumbus as villainous servant Vasquez. And superb comic relief from Morag Siller as lady’s maid Putana, and the hysterical double act of Dean Nolan’s Poggia and his dim-witted master Bergetto, played by James Garnon, who also shows his fiercer side as the Cardinal.

The real star of any production here at the Sam Wanamaker is the Jacobean playhouse itself. This 340-seater – all exposed wood and flickering candles (what a health and safety nightmare) across three tiers of pit and two horseshoe galleries – is an intensely intimate space, a time machine capsule that makes classics like Ford’s feel urgently contemporary by hurtling you into the past to imagine what it must have felt like seeing them first time round. Magic.

‘Tis Pity has opened the Sam Wanamaker’s second winter season – and I feel bad raving about it to you in its final week, when you’ll be hard pressed to get a ticket. But there’s plenty more opportunity to see the venue itself. The winter continues with a Christmas return of last year’s hit production of Francis Beaumont’s 1607 romp The Knight of the Burning Pestle, followed by next year’s offerings of The Changeling (starring Hattie Morahan), L’Ormindo, Farinelli and the King (starring former Globe artistic director Mark Rylance) and The Broken Heart. 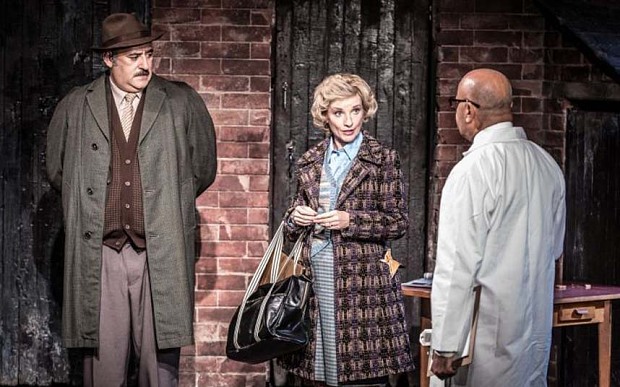 Set in the 1970s in working-class Salford, Ayub Khan Din’s East Is East was first seen in 1996, premiered by Tamasha Theatre in a co-production with Birmingham Rep and the Royal Court. The more famous film version was released in 1999 and also spawned the 2010 sequel West Is West.

In this first major London revival – care of another young director to watch, Sam Yates, as the second offering in Jamie Lloyd’s second Trafalgar Transformed season – author Khan Din plays Pakistani-born patriarch George Khan, the role inspired by his own father, with Jane Horrocks stepping into the role of his put-upon English wife Ella, originated on stage and screen by Linda Bassett.

“He’s got no right to tell us what our culture should be. He lost that when he settled here and married our mam.”

Both are touching and nervy as they try to parent a herd of children, reconcile two conflicting cultures and combat racism and prejudices on both sides. The ‘herd’ (Taj Atwal, Nathan Clark, Michael Karim, Ashley Kumar, Darren Kuppan and Amit Shah) are a totally believable, living-on-top-of-one-another bunch of bickering but grudgingly lovable siblings. And Sally Bankes as neighbourly Auntie Annie is a hoot.

For more about the semi-autobiographical nature of East Is East, read Ayub Khan Din’s excellent blog for his publisher Nick Hern Books here.

East Is East continues at Trafalgar Studios 1 until 3 January 2015. 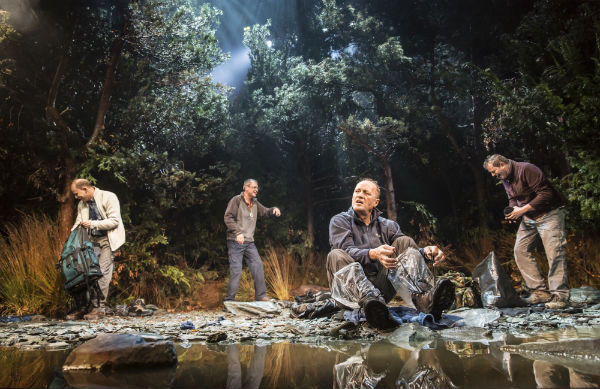 Like East Is East, Neville’s Island had its London premiere in the 1990s – two years earlier, in 1994 at the Apollo Theatre, having transferred from Scarborough’s Stephen Joseph Theatre where it opened in 1992 – and gets its first major London revival here. Angus Jackson directs this Chichester Festival production, with an all-star cast comprising Tony Morrissey as mild-mannered team leader Neville and Robert Webb, Miles Jupp and Adrian Edmondson as his middle manager colleagues on an Outward Bound-style course on Derwent Water.

Unlike East Is East, I saw the original production – directed by Jeremy Sams and starring Tony Slattery as sarky Gordon (now played by Edmondson) – and being on hand for this offering 20 years on makes me feel distinctly old. This feeling is reinforced by Tim Firth’s script which, despite some light tweaking of cultural references, has dated noticeably, thanks in large part to gadget freak Angus’ (Jupp) clunky ‘handheld’ technology.

“Part the waters or walk on the surface – Christians can do either. They’re fantastic at water polo.”

“If you cut his heart open, it’d be like Salford Business Park on a Sunday.”

But there are still plenty of laughs (Gordon has some cracking put-downs) and surprising swells of pathos – as you’d expect from Ayckbourn protégée Firth in what was his first full-length play commissioned by the master. And a river runs through Robert Innes Hopkins’ stunningly verdant set. (Warning to front-row theatregoers: if you thought you got wet at Singin’ in the Rain, think again.)

Neville’s Island runs at the West End’s Duke of York’s Theatre until 3 January 2015. 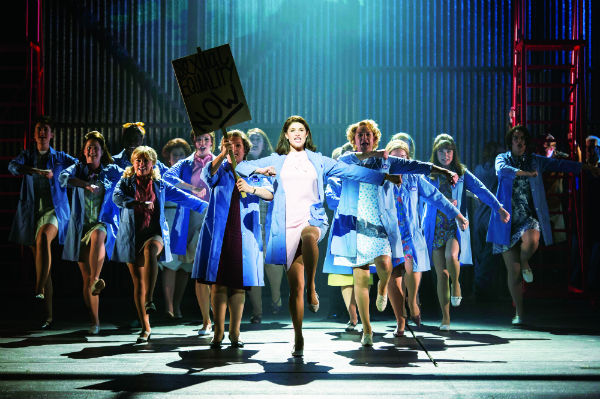 Gemma Arterton leads the strikers in Made in Dagenham

Saving the blockbuster musical for last. What a great time we’re having for new musicals we’re having in the West End at the moment. I caught this screen-to-stager hot on the heels of rapturous evenings out at Memphis and Sunny Afternoon. And next up, previewing at the Playhouse from 16 December, Women on the Verge of a Nervous Breakdown.

In Made in Dagenham, directed by Rupert Goold, Gemma Arterton is sweet and beautiful to look at (my other half couldn’t stop looking at her) as unwitting political activist (and fictional) Rita O’Grady, who rallies the seamstresses of Ford’s Dagenham plant to strike for equal pay (sort of) in 1968.

It ain’t about the money
It’s about respect.
Women always come in second,
That’s what we reject.

Like the 2010 film of the same name, Made in Dagenham plays fairly fast and loose with the historic facts and broad characterisations, but its heart is in the right place. On the night I attended, middle-aged women were whooping supportively at lines like “How will we cope? We’re women, we always cope” and leaping to their feet when urged to “Stand Up” in the final trade union rally scene.

Amongst those broad characterisations which nevertheless raise the laughs are Prime Minister Harold Wilson and Secretary of State Barbara Castle, played with, in the case of the former, politically incorrect aplomb, and the latter, no-nonsense steeliness, by Mark Hadfield and Sophie-Louise Dann, respectively.

Made in Dagenham has a book by Richard Bean, music by David Arnold and lyrics (including those quoted above) by Jerry Springer The Opera‘s Richard Thomas. It’s designed by Bunny Christie and choreographed by Aletta Collins.

For two intriguingly differing feminist views on what the Dagenham strikers actually achieved, read this exchange between Beatrix Campbell and Germaine Greer at the time of the films release in 2010.

Made in Dagenham is currently booking at the West End’s Adelphi Theatre until 28 March 2015.