My theatre diary: The Distance, Electra, Lord of the Flies, Urinetown, Next Fall

Home-My theatre diary: The Distance, Electra, Lord of the Flies, Urinetown, Next Fall

My theatre diary: The Distance, Electra, Lord of the Flies, Urinetown, Next Fall

Having escaped back to Mallorca for a week (god, I love that place, my little piece of heaven), there are at least two weeks of theatre I want to catch up with. My must-see list just keeps growing and growing and has, more accurately become, a might-see list … if I can find a mammoth extra stash of time somewhere.

If you’ve seen any of the following yet and can help me prioritise, please leave a comment below or tweet me your suggestions @TerriPaddock. In no particular order, my current top ten might-sees are:

In the meantime, another thing I have to catch up on is telling you about some of the great shows I did manage to see before my getaway. Amongst them, the eclectic mix of drama, dance and musical theatre below. As usual, I’ve listed them in closing date order. Don’t delay with the first two in particular, both of which finish their limited seasons over the next week and a half. 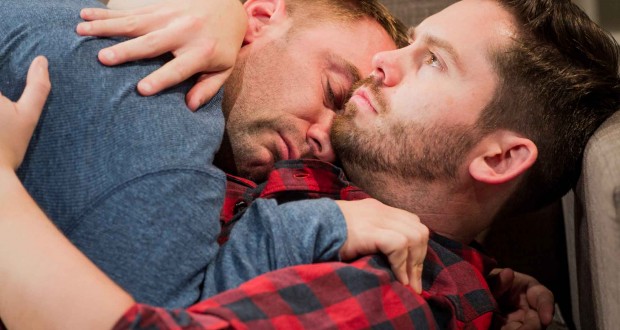 Charlie Condou and Martin Delaney in Next Fall at Southwark Playhouse

Director Luke Sheppard, who had such a hit this summer with In the Heights, returns to Southwark Playhouse to direct another UK premiere of another Broadway hit, albeit a very different beast of one. Rather than a high-energy musical, Next Fall is comedy drama by Geoffrey Nauffts.

Coronation Street star Charlie Condou returns to the stage to play Adam, who, despite his own cynicism, falls in love with devout Christian Luke (Martin Delaney), who is too ashamed to come out to his religious parents. When Luke is hospitalised in a coma, Luke comes face to face with deeply held prejudices, and not just those of Adam’s churchgoing family.

This is a thought-provoking piece, but I hesitate in labelling it a ‘gay play’. The couple at the centre of it happen to be two men, but for me, latent homophobia is much less interesting and central to the plot than the notion of how faith, or lack of it, can impact a relationship.

You people are all about judging. You even a whole day named after it.

On the night I attended, I was one of only a handful of women in attendance; and I reckon my partner was in just as small a minority as a heterosexual man. It would be a shame if other straight people ignore this important play.

The onstage friendship between Condou and Sirine Saba positively fizzes. And I also enjoyed seeing Mitchell Mullen onstage again in the Little, this time as a Christian hardass, a world away from the ageing hippy he played here earlier this year in the UK premiere of Tracy Letts’ Superior Donuts.

Next Fall finishes its run at Southwark Playhouse this Saturday 25 October 2014. 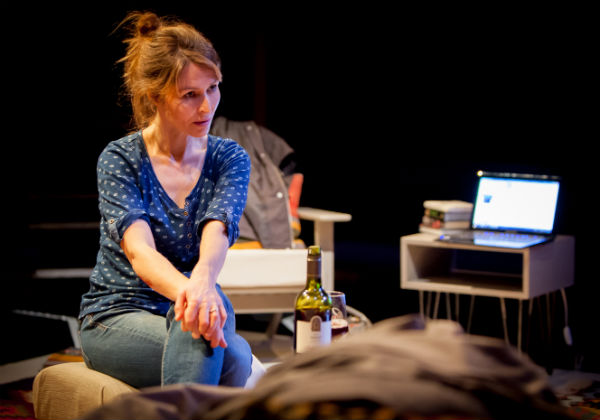 Helen Baxendale in The Distance at the Orange Tree Theatre

The Distance absolutely goes the distance, and more, for me.

First and foremost, it is so refreshing to see a well-written modern play about women, written by a woman (Deborah Bruce) and directed by a woman (Charlotte Gwinner), and with three remarkable women starring (Helen Baxendale, Clare Lawrence-Moody and Emma Beattie).

In Bruce’s comedy-drama, Baxendale is Bea, who has abandoned her husband and two young sons in Melbourne and fled back to England where her two best friends, Kate (Lawrence-Moody) and Alex (Beattie), have called an emergency meeting to talk Bea back into her responsibilities as a mother.

There’s a lot to consider about parenting and families – with husbands, fathers, brothers and sons also having their say care of strong supporting performances from Daniel Hawksford, Oliver Ryan, Timothy Knightley and young Bill Milner – but it’s the female friendships that are the beating heart of The Distance.

“I thought that having babies would anchor me, stop me feeling so adrift.”

Can a mother remain loyal to a friend who has elected to abandon her own children, who declares that she feels no love for her own flesh and blood? Can these women ever stand a chance of understanding or empathising with each other? No easy answers, but wonderful theatre.

The Distance runs until 8 November 2012 at the Orange Tree Theatre. 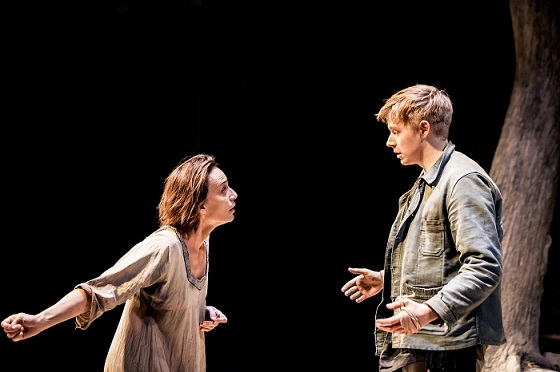 Kristin Scott Thomas onstage is always an event. Such a coolly elegant and mesmerising actress. And here, reunited with Ian Rickson who also directed her in The Seagull (Royal Court and Broadway) and Old Times (West End), she gets to tackle the female Hamlet: Electra.

Scott Thomas’ Electra wallows unflatteringly in her extended grief for the death of her father, murdered by her mother and uncle. She flaps and flails around the stage like a melodramatic teenager – a stance that serves to underline the character’s arrested emotional development.

Has it not dawned on you how much you make your own misery?

Perhaps Rickson is making a similar point with the wider casting, or just trying to cover up the fact that his leading lady is – to be honest – a bit long in the tooth for the role.

But the wildly mismatched ages of this highly dysfunctional family did have me scratching my head a bit. There are only 13 years between Scott Thomas and her mother, Diana Quick’s excellent Clytemnestra, but yawning 20- and 30-year gaps between her and her sister and brother, Liz White’s Chrysothemis and Jack Lowden’s driven Orestes, respectively.

Still, this is a gripping hour and 40 minutes, run straight through, and another opportunity to be enveloped in the intimacy of the Old Vic’s current in-the-round configuration. 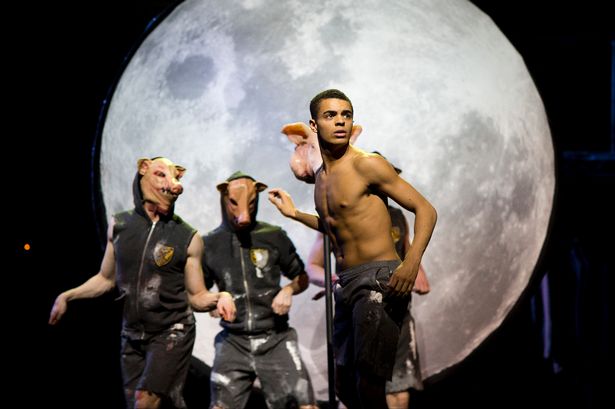 Layton Williams in Lord of the Flies for New Adventures and Re: Bourne

Lord of the Flies

I was blown away by New Adventures’ version of William Golding’s 1954 literary classic Lord of the Flies. Adapted and directed by Matthew Bourne and Scott Ambler, with Ambler also choreographing, the story of the English public schoolboys, who descend into savagery after being marooned on a desert island, is communicated through dance with breathtaking beauty and energy.

Throughout the performance I saw at Sadler’s Wells, I found myself gasping “wow!” over and over again throughout the evening. Marveling at the the way the ensemble bring the island, the jungle and the story to life with an array of hampers, coat racks and climbing platforms on Lez Brotherston’s minimal set. Marveling at the way they tell the story with such physicality and precision.

New Adventures’ professional dancers – including Sam Archer as Ralph, Sam Plant as Piggy and Danny Reubens as rebel leader Jack – all steer the action deftly. But it’s Layton Williams, as the sacrificial Simon, who is the real standout, with such smooth and supple movement that I started to wonder whether his bones were made of rubber.

I noted on the night that, if Billy Elliot were written today, it would be Lord of the Flies that the young Billy aspired to rather than Bourne’s earlier landmark offering, Swan Lake. So how appropriate that a former West End Billy, Williams, should be the star of this new masterpiece.

By the way, the pros are matched for passion and dedication by an incredible ensemble of local boys and young men, recruited and trained over the past year by New Adventures and Re: Bourne – a different ensemble at each stop of the Lord of the Flies tour. An amazing programme and achievement, which will, no doubt, inspire another generation of would-be Billys.

Lord of the Flies continues on tour to Cardiff, Newcastle, Norwich and Bradford, where it concludes on 6 December 2014. 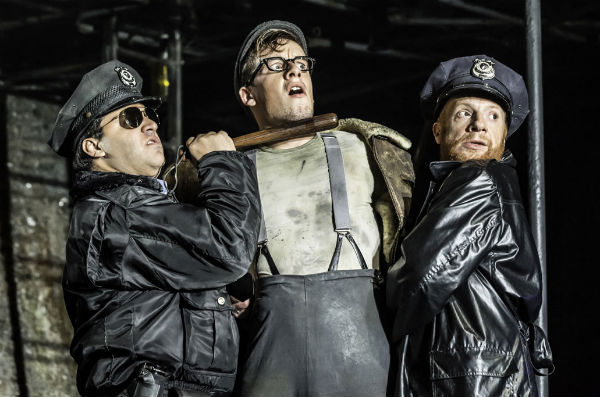 Nathan Amzi, Matthew Seadon-Young and Jonathan Slinger in Urinetown at the Apollo Theatre

Urinetown has transferred confidently from its UK premiere season at the St James Theatre to the West End’s Apollo Theatre. I enjoyed Jamie Lloyd’s production of Mark Hollman and Greg Kotis’ satirical dystopian anti-musical nearly as much the second time as I did the first time. For anyone who hasn’t yet seen Urinetown, stop pissing around and just book your tickets now.

Matthew Seadon-Young has taken over from Richard Fleeshman as slightly dopey hero Bobby Strong. Jenna Russell remains on sensational form as Mrs Lovett-in-waiting amenities manager Penelope Pennywise, with Simon Paisley Day and Jonathan Slinger still making menacing mayhem as baddies Cladwell and Officer Lockstock. “Don’t be the bunny” … but do hop to it.

Urinetown is booking until 24 January 2015 at the West End’s Apollo Theatre. 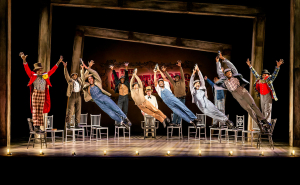 The Scottsboro Boys at the Garrick Theatre

Other shows that I’ve seen recently that I also recommend and have blogged about separately include the Menier Chocolate Factory’s take on riotously fun lampoon-fest Forbidden Broadway, Simon Callow’s latest solo show The Man Jesus and Damn Yankees at the Landor Theatre.

Plus one more recommendation: Kander and Ebb’s The Scottsboro Boys. I was lucky enough to see this politically charged, historically informed musical, performed as minstrel show, at the Young Vic last year, and I hope it finds the wider audience it so richly deserves in the West End.

The Scottsboro Boys is booking at the West End’s Garrick Theatre until 21 February 2015.