I’m well overdue for a theatre diary, aren’t I? So here goes with a quick one on more new plays I’ve seen in recent (and not-so recent) weeks that I’d recommend catching and haven’t yet managed to squeeze in to separate blogs. As usual, I’ve listed productions in closing date order: the first three finishing this coming weekend!

If you follow me on Twitter (@TerriPaddock) – please do! – you’ll be able to see my initial reactions from trips to the theatre (and also the occasional #theatreselfie when I’m in the mood). Scroll down to see the tweets for these shows collated below.

Other shows I’ve seen recently, and have already blogged about separately, include musicals Grey Gardens (sold out – good luck!) and Guys and Dolls, which I also recommend. Three more I haven’t yet blogged about but absolutely will all happen to be solo shows: Eddie Izzard‘s Force Majeure at the Palace, Ruby Wax’s Sane New World at the Arts and, from someone who is not a household name in Britain, Mona Golabek‘s extraordinary family-history-through-music piece The Pianist of Willesden Lane. 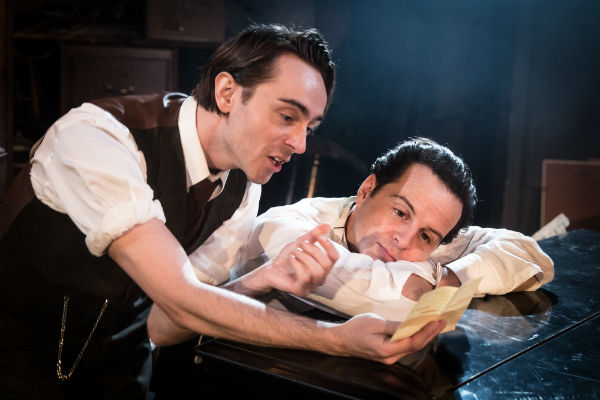 David Dawson and Andrew Scott in The Dazzle at Found 111

Richard Greenberg‘s is a play of two halves and three strong performances. In Act One, there’s turn of the 20th century New York glamour with three aristocratic eccentrics vying for belonging and financial stability. In Act Two, fast-forward years that feel like centuries as eccentricity has given way to madness and penury in a version of hoarders’ hell.

The run sold out early thanks mainly to the appeal of Andrew Scott (i.e. Benedict Cumberbatch’s Sherlock nemesis Moriarty) and it is wonderful to see Scott in mesmeric form back onstage, but it’s David Dawson playing his slightly saner, protective brother and Joanna Vanderhamm as a seductive socialite turned spectral Miss Havisham who provide the evening’s pathos. 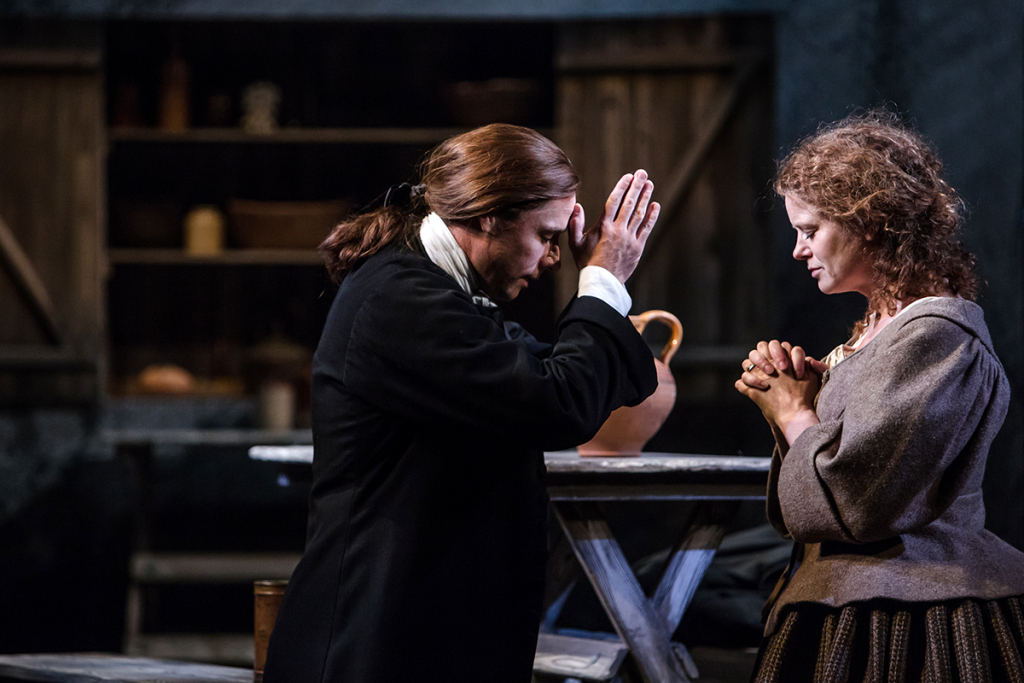 Jane Wenham: The Witch of Walkern at the Arcola Theatre. © Richard Davenport

Jane Wenham: The Witch of Walkern

Having tweeted and blogged about the controversy around Jane Wenham: The Witch of Walkern some months ago, when I girls’ high school cancelled a performance on the grounds that it was “inappropriate” material for young women, I had to see Rebecca Lenkiewicz‘s new play for myself.

Boy did those girls miss out. Jane Wenham is inspired the true story of the eponymous anti-heroine, the last woman to be prosecuted (though not – necessarily – executed) for witchcraft in England. It’s this country’s answer to Arthur Miller’s The Crucible, but told from the witches’ – and a feminist woman’s – perspective. It’s strong, heady stuff.

Jane Wenham: The Witch of Walkern runs at the Arcola Theatre until 30 January 2016. 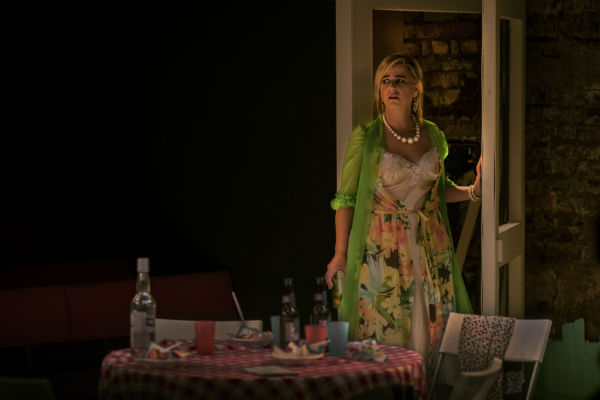 While Jane Wenham conjures comparisons with Arthur Miller, this other new play on the fringe channels Miller’s American contemporary, Tennessee Williams. The Long Road South is a semi-autobiographical play by American-born, London-based Paul Minx, incubated down the road at the Hope Theatre and now transferred for a limited run with a high-profile cast including Michael Brandon and Imogen Stubbs.

Stubbs plays a drink-sodden Blanche Dubois type a few years on, assuming she’d married a Stanley Kowalski type (Brandon) herself and migrated to suburban Indiana in the 1960s where the couple have two troubled children. It’s a precarious portrait of family dysfunction, but the real drama is driven by ‘the help’, played with real dignity and passion by Cornelius Macarthy and Krissi Bohn, planning their escape to take “the long road south” and play their part in the civil rights movement.

The Long Road South continues at the King’s Head Theatre until 30 January 2016. 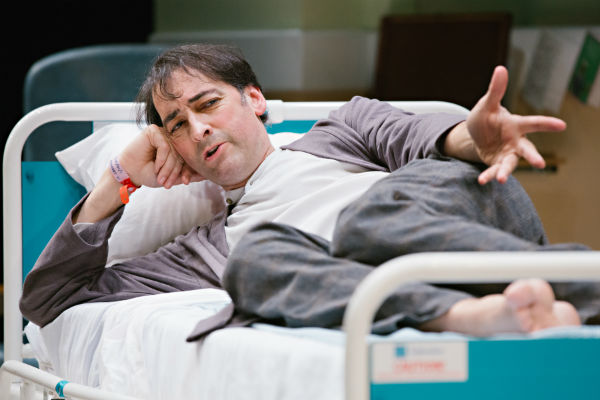 Alistair McGowan in 4000 Days at the Park Theatre

I missed seeing Alistair McGowan in An Audience with Jimmy Savile last year, so wanted to make sure not to miss him in this return to the Park Theatre. He’s playing far less controversial fare this time round in the fictional role as a middle-aged man who wakes from weeks in a coma having lost all memories from the past decade (the 4000 days of the title) – including knowledge of his relationship with his live-in partner.

This new play is also new territory for author Peter Quilter, who’s best known for his plays about female singers: End of the Rainbow, about Judy Garland and about to be revived on tour, and Glorious!, about the “worst-ever” singer Florence Foster Jenkins, played by Maureen Lipman in the West End. But it asks some interesting questions including: do we lose our true selves if we lose our memories? And which are the compromises worth making? Daniel Weyman is McGowan’s dejected partner and Maggie Ollerenshaw his bitterly lonesome mother in Matt Aston‘s premiere production. 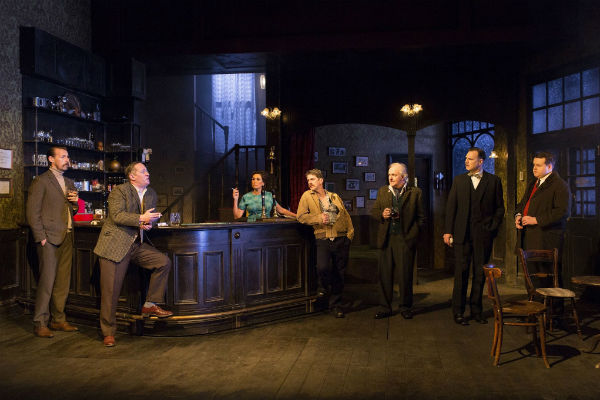 The cast of Hangmen at Wyndham’s Theatre

Martin McDonagh‘s return to the stage after more than ten years is one of the most talked-about plays of the past year, topping most critics’ “best of” lists for #theatre2015 and sure to win more than just the Critics’ awards for Best New Play. David Morrissey plays Harry, a hangman turned publican who is sought out for comment by a reporter and a mysterious stranger (a very creepy Johnny Flynn) as capital punishment is abolished in England.

Was it just a job to Harry or is hanging in his bones? When his daughter disappears, he feels the noose tighten again, in unexpected ways. McDonagh is the master of black comedy, and though this one’s lighter on blood than the likes of The Lieutenant of Inishmore (remember all those dismembered corpses), it’s no less macabre. Wonderfully directed by Matthew Dunster, the excellent ensemble cast also sees great turns in this West End transfer from Andy Nyman, John Hodgkinson and – though outnumbered 5-1 – the cast’s two women Sally Rogers and Bronwyn James as Harry’s feisty wife and daughter.

Hangmen continues at the West End’s Wyndham’s Theatre until 5 March 2016.