There are plenty of plays to choose from on London’s fringe and Off-West End. Here are some that I’ve seen recently and am happy to recommend. As usual, I’ve listed them in closing date order. Don’t delay with the first two in particular, both of which finish their limited seasons this week. 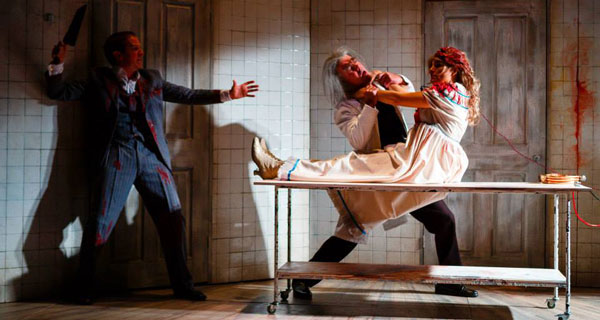 I scheduled to see this gleeful gorefest on Halloween Eve, which couldn’t have been more perfect timing – but chills and spills continue in November.

Though I was familiar with the term “grand guignol”, I didn’t realise that the term derived from an actual place. A Parisian institution, like the Moulin Rouge, but specialising in mutilation rather than titillation, Le Theatre du Grand Guignol (which translates as “The Theatre of the Big Puppet”) staged its horror entertainments from 1897 to 1962 before it fell out of fashion and closed its doors – a precursor to modern “splatter films”.

“Writing isn’t easy. Writing is agony given shape on the page.”

Carl Grose’s play, first seen at Theatre Royal Plymouth in 2009, is set in The Grand Guignol and examines the real-life working relationship between resident playwright Andre de Lorde (who wrote over 100 plays for the theatre between 1901 to 1926) and psychologist Alfred Binet, against the backdrop of a fictional serial killer on the loose.

“I am the most assassinated actress in the world. My six-minute decomposition onstage without the use of makeup is legendary.” 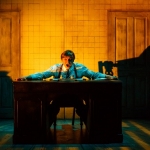 This is very black, very silly farce – macabre mayhem a la Theatre of Blood, and quite a lot of the red stuff oozing by the final massacre scene. The cast – Robert Portal, Paul Chequer, Matthew Pearson, Andy Williams and Emily Raymond (as Maza, “the most assassinated actress in the world”) – seem to relish the romp.
It’s also great fun seeing Jonathan Broadbent as the demonised de Lorde, a striking contrast to his performance as lovable Guy in the Donmar Warehouse revival of Kevin Elyot’s My Night With Reg, which he’ll reprise in the West End in the new year. 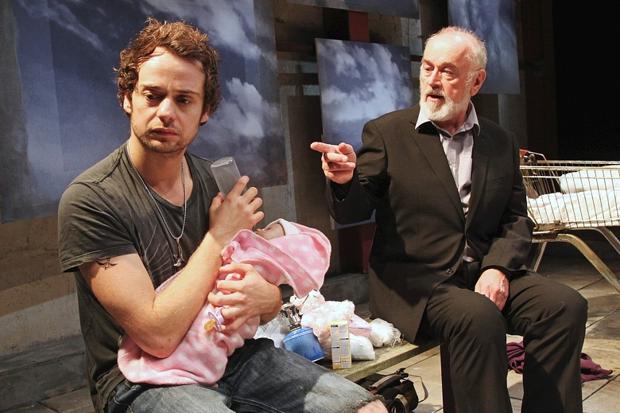 Robert Holman’s two-hander had its world premiere at Manchester’s Royal Exchange in 2008, and now receives it London premiere in this production care of director Tim Stark, who has previously directed and acted in Holman plays at the Exchange and the RSC.

Peter Egan is Otto, an old, disenchanted clergymen, who meets Alex Waldmann’s Jonah, a young father-and-sometime conman waiting for a ferry crossing to France with (a worryingly silent) infant in tow. Through a series of encounters over a single day, the two men try to hide and reveal their true selves and deepest secrets.

“I’m a nonentity – I even fear losing that.”

Jonah and Otto is a curious play, slightly elusive but hypnotic in its way. It feels like a meditation between two versions of one’s self, or perhaps a father and son. And, while many of the concerns are male-oriented, not least a rampant lust for women, the essence boils down to our human desire to know and be known by another.

There are also a few nice magic tricks, and an amusing set-piece in which Waldmann undresses a snoozing Egan in order to steal his clothes.

Jonah and Otto finishes its limited season at the Park Theatre this Sunday 23 November 2014. 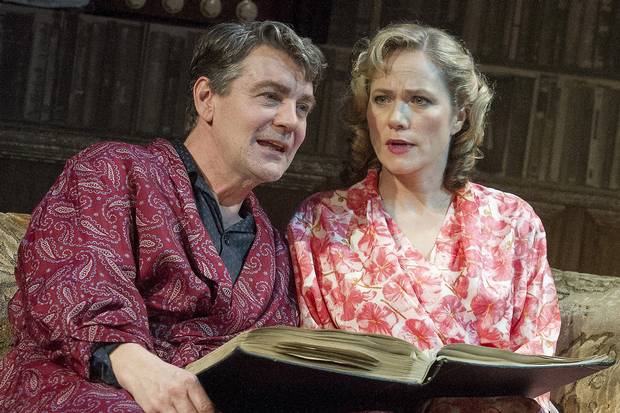 Top accolades for Accolade. The inaugural One Stage season, comprising three back-to-back plays mounted by up-and-coming producers and programmed by Stage One, concludes at the St James Theatre with this first major revival of the “Welsh Noel Coward” Emlyn Williams’ 1950 play, produced by Nicola Seed.

“If you’re a member of society, you have to conform or crack. You can’t have it both ways.”

And, most crucially to the plot, will society ever approve? It’s amazing that Accolade escaped the Lord Chamberlain’s censorship in 1950, given how explicit it is. Its subject matter was clearly ahead of its time, and in many ways, despite the cut-glass Cowardesque accents and banter, feels incredibly modern as a result.

Director Blanche McIntyre’s production, first seen at the tiny Finborough Theatre in 2011, fills the larger St James stage nicely, with the walls of designer James Cotterill’s book-lined study set literally closing in on Trenting and his family as the scandal escalates.

“We all have one thing that we’re ashamed of…. You have committed the sin of being found out.”

As the randy novelist, Alexander Hanson has another go at a Stephen Ward-type society scapegoat, but this time without Lloyd Webber songs and with a remarkably sympathetic wife in Abigail Cruttenden’s Rona and a much happier ending.

Accolade continues at the St James Theatre until 13 December 2014.